Showstoppers 2023 edition recognises the celebs and the celebrated

From Alia Bhatt to Tabu; Hardik Pandya to Surya Kumar Yadav; R Vaishali to Jerlin Anika...spot the pattern. They are household celebrities, followed by the lesser-talked-about but equally accomplished in films, over-the-top (OTT) series and sports. Common to all is they're outperformers. Showstoppers. Winners, in their own rights 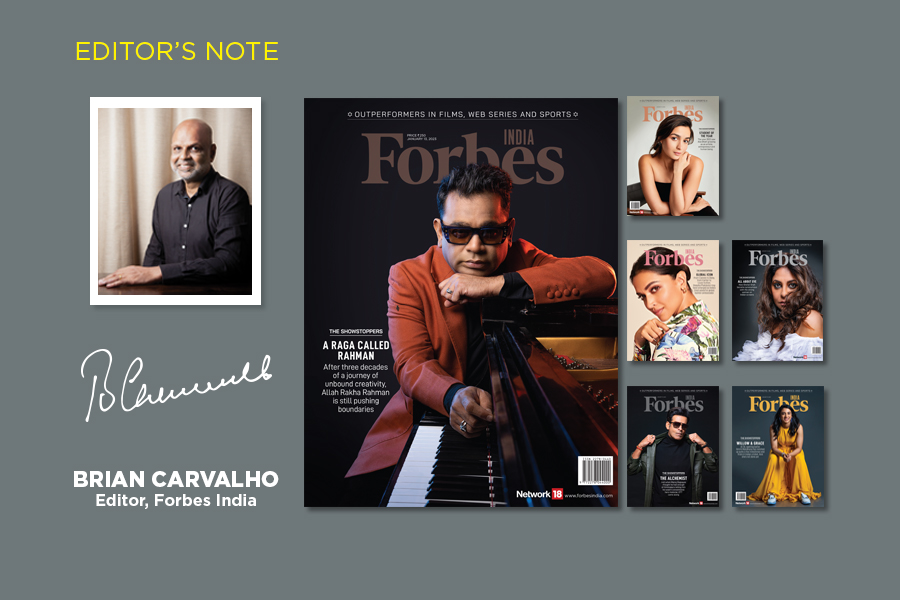 You may have spotted the pattern here: Names of household celebrities, followed by the lesser-talked-about but equally accomplished in films, over-the-top (OTT) series and sports. Common to all is they’re outperformers. Showstoppers. Winners, in their own rights.

The six covers of this issue could have led you to believe it is packed with celebrity photos and profiles. This year we deviate a bit from the script. Sure, we have celebrities but, along with them, there are up and comers from the OTT and non-Bollywood brigade, and sportspersons who blazed a trail on track, field, in the boxing ring and over 64 squares.

This issue is not only about celebrities but also the celebrated, if only for a while. We applauded Avinash Sable, the first non-Kenyan to win a medal in the 3,000-m steeplechase at the Commonwealth Games since 1994. Now Sable is a winner but the army man from the perennially drought-hit district of Beed in Maharashtra is no poster boy, no celebrity. At least not the way Bollywood and cricket stars are feted and fawned over. Not yet.

The Tokyo Olympics of 2022 may have done for Indian athletics what Viswanathan Anand did for Indian chess. Anand is a five-time World Chess Champion who became India’s first Grandmaster (GM) back in 1988. Since then, India has added 76 more GMs, the 77th being 16-year-old Aditya Mittal in early December.

Globally, athletes were conspicuous by their absence in the elite world of celebrity sportspersons, which typically boasted footballers, tennis players, basketballers and golfers. Till Usain Bolt dashed into the club. That the greatest sprinter of all time, with a bundle of eight Olympic golds till he retired five years ago, is a showman par excellence ensures that a bevy of brands still clamour for his endorsement.

The successes of the Tokyo Olympics also opened the floodgates for athlete endorsers, from sports like wrestling (Bajrang Punia with bronze) and weightlifting (Mirabai Chanu with silver). Abhinav Bindra proved back in 2008 how a gold medal in a sport like shooting can be the magic bullet for celebrity status; Neeraj Chopra reinforced the worth of an Olympic gold in Tokyo, and the javelin thrower is a celebrity endorser of no mean proportion.

Cut to the universe of streaming films and web series where glitz and glamour are playing second fiddle to substance, nuance and the original. Two of our covers are on individuals who found their calling after decades of doggedness. Till the OTT opportunity opened. Manoj Bajpayee had his share of success on the large screen, but he’s also had to survive rejections for not being a ‘regular hero’. He is one today, for sure, and as Kunal Purandare writes in ‘Miracle Man’, OTT platforms have proven to be a boon for actors like Bajpayee looking to unleash their versatility. Ditto with Shefali Shah, who was considered not ‘conventional enough’. For more on how OTT has opened fresh avenues for the actor who, as Divya Shekhar writes, “tiptoed around fame for 20 years”, don’t miss ‘Counting Stars’.

Don’t also miss our list of 50 showstoppers. To know more about Darshana Rajendran, Geetanjali Kulkarni, Priyanka Mohite and many more who may not necessarily be celebrities yet but are winners, for sure, dive into this special issue of Showstoppers.

(This story appears in the 13 January, 2023 issue of Forbes India. To visit our Archives, click here.)

Tweets by @forbesindia
Dialysis or kidney transplantation – which one is better?
BYJU's Divya Gokulnath on 2022: The year of lessons, resilience, and India's reckoning