The sum of our fears: Global outlook for 2015 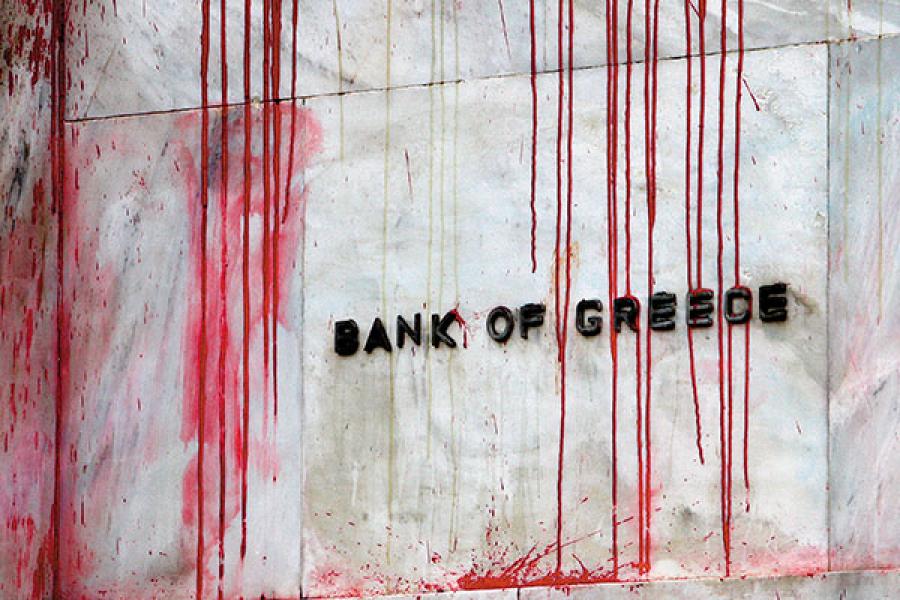 Image: Yannis Behrakis / Reuters
Economic pressures and rising inequality have led to the rise of extremist and populist parties in countries like Greece, Spain and Italy

In 2013, an asset management consultancy identified alien invasion as a risk for the global economy, albeit an unlikely one. An online reader wryly observed that even such an event would be an excuse for markets to rally further as businesses could look forward to the prospect of demand from non-human customers. Since 2009, financial markets have largely ignored risk, constructing a favourable narrative around events and rallying on any information.

Economic fears
In 2014, growth in advanced economies disappointed. Europe flirted with recession. Even the fireworks of Abenomics could not prevent Japan from sliding into its fourth technical recession in six years. The US and UK were the cleanest of the dirty shirts. But even they grew below trend.

Based on its most recent fundraising, Uber was valued at $40 billion, more than doubling its value in six months. The ride-locating service is valued at a multiple of traditional car hire firms, such as Hertz and Avis. Uber’s value exceeds the market capitalisation of publicly listed transport companies such as Delta Airlines, American Airlines and United Continental.

Compounding the problem is low inflation. In Japan and Europe, there is concern about deflation. Despite fears of hyper-inflation, abundant liquidity has not led to anticipated price increases. This reflects slow circulation of money, weaknesses in the bank sector, surplus capacity and lack of pricing power.

Emerging markets have lost momentum. Chinese and Indian economic momentum has slowed. While still stronger than advanced economies, growth is below peak levels and that needed to absorb new entrants into the workforce and maintain a fragile social and economic equilibrium. The slowdown in China affects the complex global supply chains, setting off a chain reaction in Southeast Asia and Eastern Europe. The slowdown in emerging markets has exposed previously ignored structural weaknesses of infrastructure, labour markets, skill levels, financial sector or governance.

High debt levels continue to get higher. Public sector debt continues to increase, despite efforts to bring public finances under control. The rising debt burdens in Japan, Italy and France are now reaching tipping points, especially given the lack of credible policies to stabilise or correct these levels.

Corporations have increased borrowing to fund share buybacks as well as corporate restructuring, mergers and acquisitions. Emerging market debt has also risen to finance consumption or investment to maintain growth after 2008.

High debt levels increase vulnerability to economic weakness as well as a normalisation of interest rates, which would increase debt servicing costs.

The weakness of the global economy is despite the extraordinary levels of stimulus to restore activity levels. But there is now increasing concern that these policies have reached the limits of effectiveness. Central bankers have voiced increasing fear that policy options are now limited. Japan’s 25-year experience highlights the limits of massive government fiscal and monetary stimulus to use growth and inflation to solve problems.

A new round of currency wars is underway. In a race to the bottom, many countries are being forced to cut interest rates and inject liquidity into money markets to avoid the appreciation of their currency. Japan, Europe and China are attempting to engineer devaluations to increase competitiveness.

But one nation’s weak currency equates to someone else’s stronger currency. A stronger dollar affects US exporters and foreign earnings. With 40 percent of S&P 500 sales being foreign, the effect is significant. In the third quarter of 2014, the stronger dollar reduced sales by around 8 percent. Currency devaluations combined with excess capacity, driven by debt-fuelled over-investment in China, are also helping maintain strong deflationary pressures.

Commodity prices, especially oil, have fallen sharply. This reflects weak demand and increasing supply as well as strategic manoeuvring especially in the energy markets. It also reflects a stronger dollar and expectations of rising real interest rates. Weak commodity prices compound the problems of emerging markets such as Brazil, Russia and South Africa. It also affects Australia, New Zealand and Canada, hitherto insulated from the worst of the great recession and its aftermath by high prices and rising volumes of commodity exports.

Weak commodity prices may not provide the expected fill-up to economic activity. It will affect commodity producers, especially in emerging markets. Weaker revenues will affect the ability of highly leveraged commodity producers to continue to service debt. Rising losses on commodity-dependent lending may affect the global banking system as well as investors. Lower prices have already resulted in reduced investment in projects which are uneconomic under current conditions, leading to further weakness in activity. 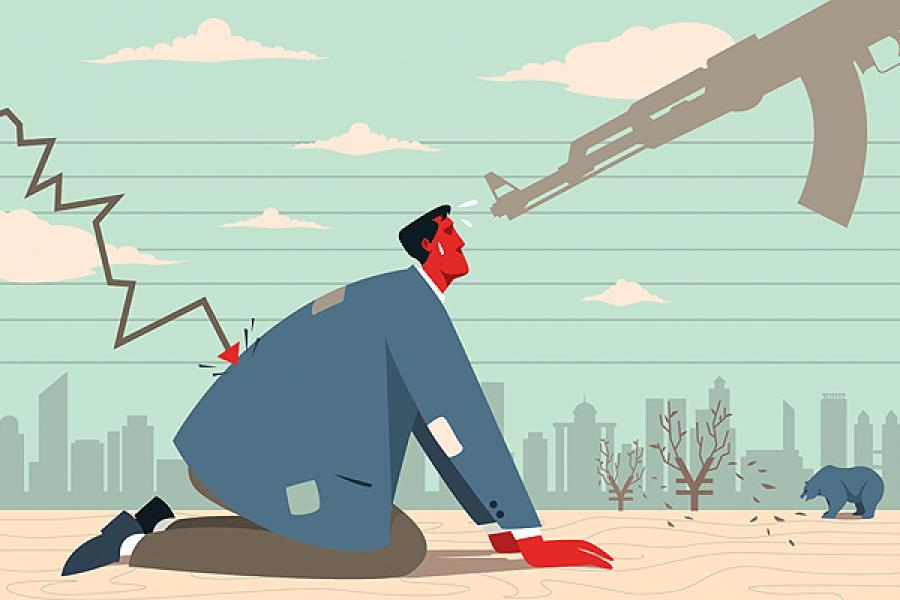 There is now real concern that policy measures are exhausted and authorities are impotent in the face of low growth and deflationary pressures. ECB President Mario Draghi has specifically pointed to limited options now available. Takehiro Sato, a Bank of Japan board member, summarised the limits of its powers: “Prices reflect the temperature of the economy, not a variable that can be directly controlled by a central bank.”

Other fears
Social stresses are increasing. High levels of unemployment have persisted despite stabilisation and recovery in many economies. For those with work, income levels are stagnant or falling and working conditions are deteriorating.

Economic pressures combined with rising inequality are driving political changes. Major parties in many countries have lost support. More extreme and populist parties such Greece’s Syriza, Spain’s Podemos, Italy’s Five Star Movement, etc, have gained support. The economic difficulties and loss of faith in traditional political parties facilitated the rise of fascism and communism in the 20th century. In The Spider’s House, Paul Bowles wrote: “If people are living the same as always, with their bellies full of food, they’ll just go on the same way. If they get hungry and unhappy enough, something happens.”

Fourth, despite a small group of vocal and well-financed deniers, the effects of environmental change continue to become an increasing factor. Extreme weather events, hurricanes, floods, droughts and fires are an increasing economic cost and disruptive influence. But attempts to stabilise and reduce emissions would increase energy costs and also result in losses for investors in standard traditional fossil fuel assets.

Geopolitical risks are increasing. Nationalism in Russia, China, India and Japan is resurgent, driving political tensions. The rise of the Islamic State threatens to overturn a Middle East order that dates back to the 1916 Sykes-Picot Agreement. Deep-seated religious and ethnic divisions will be difficult to resolve. The risk is that the region becomes a series of failed states, dominated by various warlords like the horn of Africa. In East Asia, China is involved in a series of territorial disputes with its neighbours. Her claims originate in ancient agreements such as the Seven-Dash Line, which defines sovereignty in the South China Seas.

Markets are ignoring that low rates, abundant liquidity and decreasing commodity prices are to varying degrees the result of weak economic conditions.

Few of the problems that led to the great recession of 2008 have been resolved. The BIS summarised the position in its 2012/2013 annual report: “Central banks cannot repair the balance sheets of households and financial institutions. Central banks cannot ensure the sustainability of fiscal finances. And, most of all, central banks cannot enact the structural economic and financial reforms needed to return economies to… real growth… What central bank accommodation has done during the recovery is to borrow time… but the time needs to be used wisely, as the balance between benefits and costs is deteriorating.”

Current policies have encouraged, in the words of IMF President Christine Lagarde, an excess of financial rather than economic risk-taking. The risk of a financial system crisis is now high. But there is no sign that the divergences between financial markets and the real economy is likely to stop. Investment strategist Michael Hartnett illustrated the perverse logic now needed to justify current asset prices: “I’m So Bearish, I’m Bullish... Memo to self: Always buy stocks & credit on a negative GDP…”

The position is worse than in 2008. Weaker government finances mean that the ability to support the economy and financial system is limited. With interest rates at zero and liquidity already abundant, policy options are restricted. Emerging market weaknesses mean that they will not contribute to global growth as they did after 2008. A new crisis will be like a virulent infection in a body where the immune system is compromised.

Tweets by @forbesindia
Why businesses don't need more and more data
'We have imitators but no single competition': Woodland MD