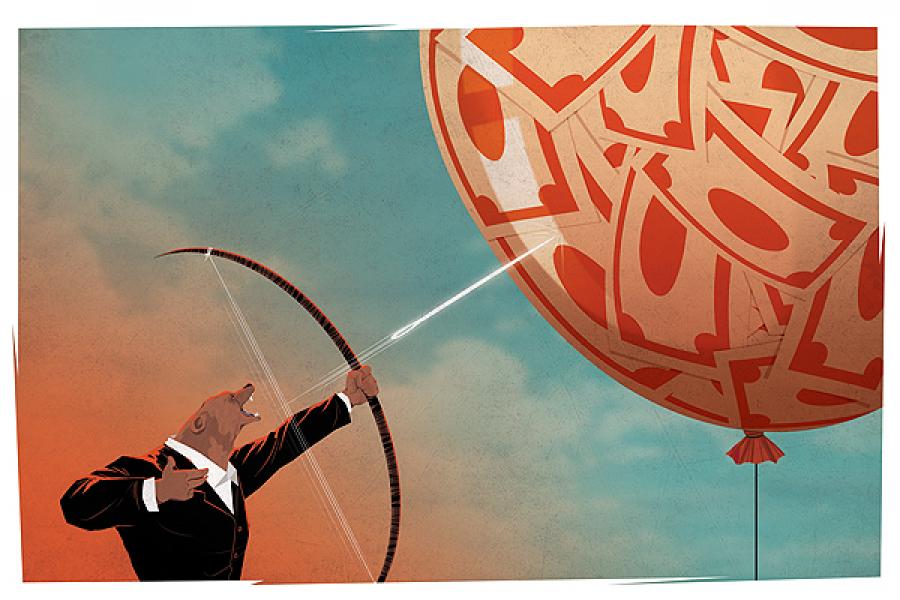 Over the last five to six years, mispricing of assets has reached epidemic proportions. Global equities prices have increased strongly. Sell-side analysts anticipate further gains, arguing that the falls of August 2015 and early 2016 represent a healthy correction. Since 2009, the US equity market has risen strongly with the main market indices having tripled over the period and are now at, or near, record levels. Euro-zone stocks have reached their highest level in 15 years. Equity market volatility is also low. The rise is underpinned primarily by financial engineering and liquidity.

US stock buybacks have reached 2007 levels and are running at around $500 billion annually. When dividends are included, companies are returning around $1 trillion per annum to shareholders, close to 90 percent of earnings. Additional factors affecting share prices are mergers and acquisitions activity and also activist hedge funds, which have forced returns of capital or corporate restructures.

The major driver is liquidity, in the form of zero interest rates and quantitative easing (QE). According to one estimate, over 80 percent of equity prices are supported in some way by QE.

Stock prices have risen as the rate at which future earnings and dividends are discounted back to the present has fallen dramatically. The equity risk premium has increased as a result of lower interest rates. Citibank analysts argue that the equity risk premium is now over 5 percent, well above the historical average of 3 percent. As equity becomes more expensive relative to debt, companies ‘de-equitise’, substituting debt for equity, reducing the quantum of available shares boosting prices.

Recent rises in equity markets have been helped by the fact that globally central bank purchases of government bonds is above new issuance. This implies further falls in term rates and increases the equity risk premium. Over time, if the equity risk premium reverts to its long-term average, then share prices may move higher with each 0.5 percent, equating to a rise of 20 to 30 percent.

Higher stock prices are supported by improved earnings. But on average 70 to 80 percent of the improvement has come from cost cutting rather than revenue growth. Since mid 2014, profit margins have stagnated and may be falling.

A key factor is currency volatility.

The higher US dollar is pressuring American corporate earnings. A 10 percent rise in the value of the dollar equates to a 4 to 5 percent decline in earnings. But a slowdown in the rise of the US dollar, which alleviates pressure on the American industry, will affect other markets adversely. Rallies in European and Japanese stocks have been driven, in part, by the fall in the value of the euro and yen respectively. A weaker US dollar assists American businesses, but weakens European and Japanese firm earnings.

Lower commodity, especially energy prices, will affect resource firm earnings. In the US, wage rises, such as the symbolic Walmart pay increase and higher minimum wages in some states, as well as shortages in skilled labour may also erode profit margins. The major concern is weak global demand with lacklustre growth in Europe and Japan, and deterioration in emerging markets. The lack of revenue improvements and deceleration in earnings growth mean that recent price increases reflect multiple expansions; that is high price-to-earnings and price-to-book ratios.

The S&P 500 now trades at 17 to 18 times forward earning, a level that is historically expensive and only exceeded during the 1999-2000 tech bubble.

Other markets are also priced above historical levels.

The frothy environment is evident in other behaviour. Investors chasing revenue and earnings growth have pushed up sectors such as technology and biotechnology, the best performing sector for some years. Reminiscent of the earlier tech boom, of the 150 companies that make up the Nasdaq Biotech Index, only 41 had positive earnings, with just 5 representing over 80 percent of earnings.

Over 80 percent of new initial public offerings were for companies with no earnings. A significant component of activity has been private equity investors taking advantage of high valuations to sell holdings.

Given the size of the US market and the tendency for investors to use cross market value benchmarks, a correction of overvalued American stocks is likely to have significant implications for equity market globally.

The overvaluation is driven by central banks. US Federal Vice Chairman Stanley Fischer observed that staff calculations indicated that current programmes had reduced 10 year treasury yields by 1.10 percent. But with central banks globally likely to continue or even expand liquidity support programmes, it is possible that rates may stay low for an extended period or even fall further.

The perverse environment caused David Rosenberg, chief economist and market strategist at Gluskin Sheff, to muse about the strange phenomenon of investors buying low or zero yielding bonds for capital gains and purchasing shares for income. With risk on government bonds increasing, equity analysts argued that investment in shares was preferable to bonds as they offered better protection from a rise in risk-free rates.

The lack of returns in government bonds has driven overvaluation in credit markets. Investors have taken on additional risk, moving into corporate bonds. In the US alone, the estimated net inflow into bond funds has been $1.2 trillion. The investment-grade corporate bond market, as measured by a Bank of America Merrill Lynch index, has increased to $4.8 trillion. The increased investment has driven rates ever lower, with the average falling under 2.9 percent in early 2015.

With rates on investment grade corporate debt
declining, investors have invested increasingly in higher yielding non-investment grade and emerging market debt, including by the ever more exotic issuers for Africa or Asia. Mispricing is common with below 4 percent coupons on single-B-rated (i.e. highly speculative) bonds. In 2015, as a result of the European Central Bank’s QE programme, the yield on around 50 percent of BB rated bonds (i.e. not investment quality and speculative) fell below 2 percent. Even structured credit has regained popularity as desperate investors chase returns.

The risk-return relationship has deteriorated with investors no longer being compensated for the true default risk. Given the very low absolute rates, investors are also increasingly exposed to higher interest rates. A 1 percent rate rise will result in around 7 percent loss in the value of US corporate bonds, an increase of around 40 percent from the 5 percent loss 5 years ago.

Since late 2015, credit spreads have begun to rise. For riskier non-investment grade, high yield bonds and borrowers in the energy sector, the levels on average are approaching those of 2006-07.

Real estate prices have risen globally with investors purchasing rental income streams to diversify away from low-income financial assets. Markets as disparate as the US, Canada, the UK, Germany, France, Scandinavia, Australia, New Zealand, China, India and many other emerging countries have become overheated.

Collectibles such as art, vintage cars, wine, etc, also exhibit the effects of over enthusiasm. Prices reflect the scarcity of availability and the desire by smart money to escape the perceived manipulation of financial markets.

One asset class, commodities, has corrected. The combination of increased supply, slowing demand especially from China, a stronger US dollar and geopolitical factors has seen most commodity prices fall. The most significant declines have been in energy and iron ore prices.

Business, household and government debt have all increased. Only the financial sector in developed markets has reduced leverage. Businesses have borrowed not to invest, but to repurchase their own shares or buy other companies. Household borrowing, around 74 percent of which is mortgage debt, has increased in 80 percent of countries. Based on risk measures, such as debt-to-income ratios, debt service ratios, and house price changes, households in Canada, the Netherlands, Sweden, Australia, Malaysia and Thailand are potentially vulnerable.

Despite definitional disagreements, the shadow banking system—a complex network of special purpose vehicles, securitisation structures and investment funds involved in providing finance—remains large, equivalent to a quarter of the world’s total financial system. The Financial Stability Board estimates that the sector grew from assets of $26.1 trillion in 2002 to $71.2 trillion a decade later. Even after excluding spurious non-banking activities, the sector is estimated to be around $35 trillion in size. It is especially large in the US, the UK and China. Despite some retrenchment after 2008, shadow banks have continued to grow, ironically encouraged by tighter banking regulation and ample liquidity.

Investors may continue to enjoy the fruits of debt driven high asset valuations for a while longer. But financial gravity will reassert itself eventually as Rudyard Kipling observed: “Then the gods of the market trembled, and their smooth tongued wizards withdrew/ And the hearts of the meanest were humbled, and began to believe it was true/ That all is not gold that glitters, and two and two make four/ And the gods of the Copybook Headings limped up to explain it
once more.”

(This is the first piece in a three-part series)

Tweets by @forbes_india
Rolls-Royce Dawn debuts in India at Rs 6.25 crore
Brexit, Indian IT and why the 'SMAC Stack' is 'non-discretionary'