'Don't cook to be cool or cute': Floyd Cardoz in one of his last interviews

Forbes India met with chef Floyd Cardoz in Mumbai, for what turned out to be one of his final interviews, discussing the five-year journey of Hunger Inc in India, their philosophy and the road ahead 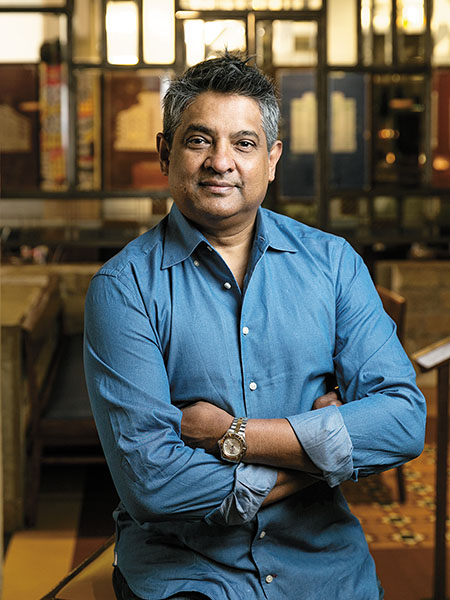 An early Saturday morning led us to The Bombay Canteen in Mumbai, to catch up with celebrity chef Floyd Cardoz and his team before he left for his home in New York the next day. The coronavirus had not yet made inroads into India the way it now has; Cardoz had been in town for the better part of a month, launching the company’s newest offering, Bombay Sweet Shop.

Hunger Inc (parent company to The Bombay Canteen, O Pedro and The Bombay Sweet Shop), co-owned by Cardoz, had just hit the five-year milestone, and Forbes India was looking to trace how the company has been pushing the envelope for making Indian food trendy, while remaining sustainable and responsible.

Along with chef Cardoz, we sat down for chats and a photo shoot with the company’s core team: Co-founders Yash Bhanage and Sameer Seth, and chefs Thomas Zacharias and Hussain Shahzad. Ten days later, Bhanage called us late at night to inform that Cardoz had just tested positive for Covid-19; on March 25, he passed away from the illness, leaving the industry devastated and in shock.

From what was meant to be a forward-looking piece on the company’s next few years, the interview now remains as one of Cardoz’s last. Soft-spoken and unassuming, he spoke about identifying true passion and core philosophy, and why authenticity will always triumph over trends. Edited excerpts:

Q. You worked in the US for decades, introducing the market to Indian flavours. What made you take the leap to start a restaurant in India with The Bombay Canteen?
I left India in 1987, and one of the reasons was that chefs were not getting recognition here then. I moved to the US, opened restaurants, and got to work with really good people. I had a restaurant called Tabla for 12 years and when that closed, I was given the opportunity to open a new one with the company. While we were designing the restaurant, I interviewed Sameer, and I loved him. He was this smart, young man who I really enjoyed talking to.

Purely as a joke, I said if he ever decided to open a restaurant in India, I would do it with him. A few months later, he joined our team, and I found that we weren’t utilising him to the best of his abilities. He had this honesty, dedication, just this… class. He was respectful of everybody and carried himself well. A year later, he came to me to say he wanted to move back to India to start a restaurant with his friend Yash, who I had heard of but never met.

Over the years, people had asked me to do something in India, but I hadn’t found someone I could trust, who understood what I wanted in my life, at my restaurants, how I wanted people to be treated. Sameer, Yash and I had the same kind of thoughts. At that time, The Bombay Canteen was a nascent idea, but the idea of treating people right, building a culture was important to them too.

I still remember the day we came up with the name—it was a winter morning, I was in Jersey City on the waterfront, waiting for a ferry, and it was extremely cold. That’s when we decided on The Bombay Canteen as the name for the restaurant. 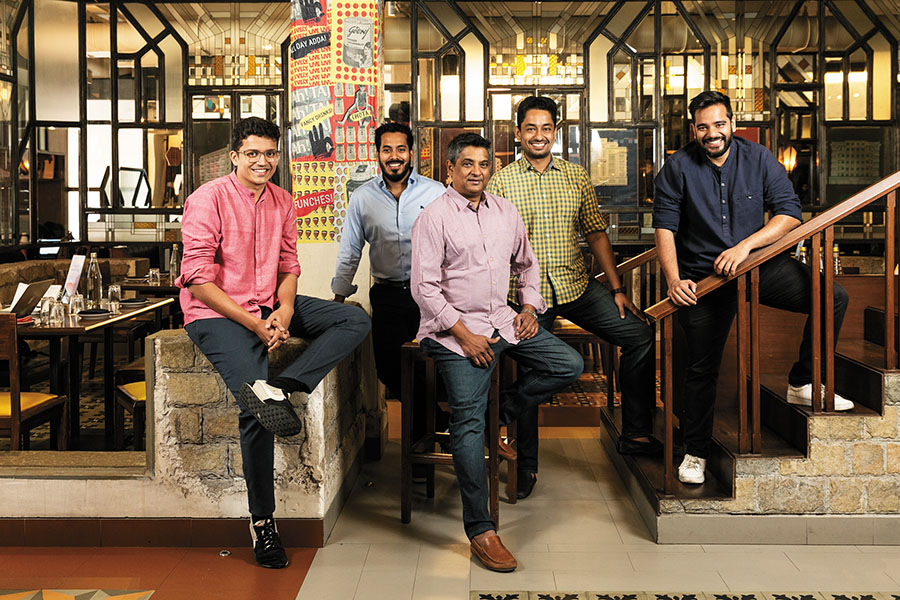 (From left) The Hunger Inc team—Yash Bhanage, Thomas Zacharias, Floyd Cardoz; Sameer Seth and Hussain Shahzad
Image: Madhu Kapparath
Q. Having opened restaurants in the US and in India, what do you think are the differences in operating in both markets?
The basics remain the same. At the core of it, it’s a real estate business, it’s about selling tables. We are lucky that all our core team members have, at some point, worked in the US, so we understand how different it is. We wanted to make a difference. And by that I don’t just mean good food, or sustainable and seasonal local food. It also means building a culture where people feel safe. People who join us want to stay on and contribute. The way the business is run, then, is slightly different. Everybody works five days a week, which was unheard of in India. We find that if you have people who are happy, they are part of making someone’s experience delightful. You could be a dishwasher, a bartender or a chef—everyone has to be invested to make sure the customer is getting the most pleasant experience.

Q. Both your leading chefs [Thomas Zacharias for TBC and Hussain Shahzad for O Pedro] had never cooked Indian food before. What made you take a chance on them, and what was the brief they were given?
I’ll never forget the day I interviewed Thomas [Zacharias]. It was a video interview; I had interviewed four people before him, and most of them were full of themselves. Then there was this young guy. He had this passion and he loved food so much. We wanted to make Indian food cool again, and he had just come back from his travels across India. One of the things I always ask people is ‘What’s the last dish you want to eat before you die?’. The other chefs I interviewed had said things like the pig tails at El Bulli, things they had probably never eaten. Thomas simply said, my grandmother’s duck curry. It was about that authentic connection, something that I want to feel every time I eat a dish. So that was the brief that both Thomas and Hussain had. We just had to give them a platform.

Hunger Inc is about making sure whatever you do is not about being cool or being cute. It should be a translation of the food and of your soul, something that people can connect with. No smoke and mirrors for us. It’s based on something very pure. That’s the brief we’ve given them, that’s the brief they’ve lived by. I’ve told them to teach people to eat the way we used to eat—and make it accessible, affordable and fun. Don’t do things that will cost people an arm and a leg because they’re not going to want to come and eat with us.

The interesting thing is, even though people think we know a lot right now, we still don’t know very much about Indian regional cuisine. It is so vast. We encourage our chefs to travel and they are constantly inspired, be it at the bar, the kitchen or at the sweet shop.

Q. What sort of questions do you ask when you’re hiring chefs?
I never ask them about how they can cook. If you work in good kitchens, which they have, obviously they can cook. My questions are aimed at understanding what drives them. ‘What makes you happy?’, for instance. Being a miserable chef leads to miserable food, miserable staff and a miserable restaurant. I’m always looking to find someone who wants to give a part of their soul to people.

We’re also looking for people who can grow with us. We actively focus on giving them tools to build the next generation of chefs in our company, who can take over so they can go on to bigger roles. Hussain, for instance, started as a sous chef at TBC, and we saw that he was ready to run his own restaurant when O Pedro came along. We speak almost every week about how to invest in training and cross-training people. I make it a point to speak to the sous chefs every week. I feel if I give them a different viewpoint, they can be a better asset to their head chefs.

Q. Hunger Inc is known for celebrating regional India and its local, seasonal ingredients in a simple yet modern way. What inspired this philosophy?
One of the important moments for me in my career was when I opened Tabla, and [acclaimed American chef] Alice Waters came in. I told her how chefs in California, like her, are so lucky because they have all these great ingredients to work with. She turned to me and said, New York has the best potatoes and apples. Learn to cook with them, and the day you do, you become a great chef.

That’s been my philosophy since. So when we went to Delhi last year, we figured out a way to get fresh peas from there to O Pedro. Local ingredients have such a wealth. Everyone uses Italian lemons but they ignore the beautiful gondhoraj lemon, which even I hadn’t heard of until a couple of years ago. So, looking at that whole spectrum of what’s available and how we can use it is a pretty cool process. We get to show people that this is who we are, and this is what we believe in.

Q. The market has evolved significantly since The Bombay Canteen first launched. Do you feel the pressure of the competition?
As far as pressures go, we are not competing with anybody. That doesn’t mean we think we’re better than anybody. It means that if we stay true to what we believe in and do the things that we hold dear to us, that’s the only pressure there is. If you try to compete with all the cool kids on the block, you tend to go away from your delicious, core hospitality.

Q. What should the next five years look like for Hunger Inc?
So here’s what I really want for the company: I want all three of our restaurants to do really well and continue to set the standard for what they’re doing. That’s rule number one. Two is to continue that philosophy and adapt it to what’s going on—like we did no plastic straws even before it was required. Doing things that are sustainable, environmentally friendly—I’d love for that to be something we do a lot more of. Third, to have a platform to grow the team from within, the next generation. I know from cooking all these years that you can’t do everything yourself. The better people you grow, the more successful you’ll be in the long term.

I still want to set the bar in terms of the food we do, the service we have, the kind of hospitality we offer, and importantly, how we treat people. I want to be able to keep our chefs happy and in the company for a long time, but also give them the tools to succeed. In terms of expansion—I never build something to expand it. But I never say never. If destiny wants us to, we will.

Tweets by @forbes_india
Azim Premji to Akshay Kumar, the top 10 donors to India's Covid-19 fight
Digesting the shocks: how supply chains are adapting to the COVID-19 lockdowns