Homeopathy medicines such as Arsenicum album 30 and Camphora 1M are being mass distributed as 'preventives' for Covid-19. However, experts say, without enough evidence to support the claim, it is irresponsible to distribute or consume them 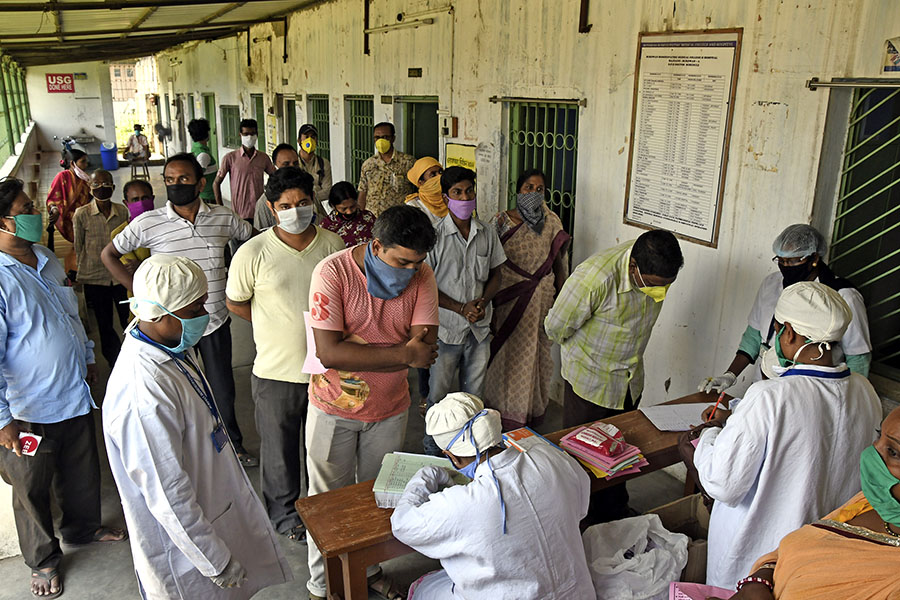 Homeopathy medicines, such as Arsenicum album 30, being distributed free of cost under Ministry of Ayush directives in Burdwan, West Bengal
Image: Shutterstock

Lakhs of bottles of homeopathy pills—containing Arsenicum album 30 and Camphora 1M variants in particular—have made their way to people across the country and to Indians in other parts of the world as they fight Covid-19. They’re being distributed for free by local hospitals, municipalities, even at police stations—and are selling for as low as Rs 10 per bottle through homeopaths in India, or as much as about Rs 700 (£7) in cities like London.

As Covid-19 cases in India climb steadily, so is the fear of contracting the virus. In just the first week of June, Riddhi Khursange, a corporator from Mumbai’s western suburb of Borivli, distributed 15,000 bottles of Arsenicum album 30 in the area. Each bottle has about 70 pills; each family member is required to take just three doses, so the bottle can typically last well beyond a single household. Arsenicum album 30 is a solution used in homeopathy, made by diluting arsenic trioxide, typically distilled over three days, such that there is little or no trace of the original arsenic molecule left in the final solution. In powder, liquid or pill form, it has been used to treat gastric disorders, inflammation, coughs and asthma. On January 29, the government’s Ministry of Ayush (ayurveda, yoga and naturopathy, unani, siddha and homeopathy) issued a health advisory to prevent the novel coronavirus, recommending the homeopathic medicine Arsenicum album 30 as a prophylactic. It stated that the Central Council for Research in Homeopathy (CCRH) and a group of experts “have recommended that homeopathy medicine Arsenicum album 30 could be taken as prophylactic medicine against coronavirus infections. It has recommended one dose of Arsenicum album 30, daily on empty stomach for three days. The dose should be repeated after one month by following the same schedule in case coronavirus infections prevail in the community”. 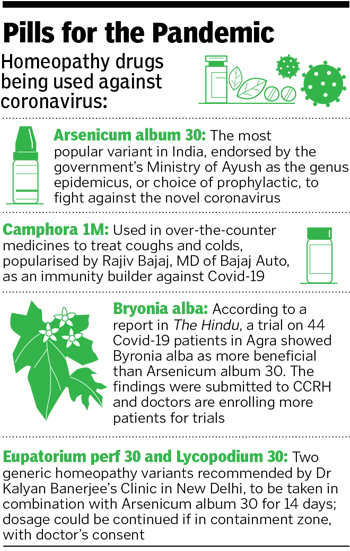 In the following months, this and other homeopathic drugs have been prescribed across the country as ‘coronavirus preventives’. State governments of Rajasthan, Karnataka, Tamil Nadu, Andhra Pradesh and Kerala have endorsed its usage too, and in Maharashtra, it is being recommended by the Brihanmumbai Municipal Corporation, government hospitals and the state police. The state police has also recommended another homeopathic drug called Camphora 1M, which uses the active ingredient camphor, used in over-the-counter cough and cold remedies. This drug gained popularity as an immunity builder against the novel coronavirus when Rajiv Bajaj, managing director, Bajaj Auto, gave an interview to India Today, endorsing its use. According to the report, Bajaj Auto set up a homeopathy centre in Pune and distributed more than 67,000 bottles of Camphora 1M. Bajaj said his employees were given homeopathy preventives during the swine flu menace in India 10 years ago too, and none contracted the disease, even though Pune was the epicentre in India. Experts, however, say there is little scientific evidence to support these claims. As per the Ministry of Ayush notification, Arsenicum album 30 has been declared the ‘genus epidemicus’, a term in homeopathy that refers to a 'combined symptoms of a large group of people afflicted with a disease or epidemic, or a remedy that covers all the symptoms which that particular epidemic is capable of producing'.  “This genus epidemicus was declared on January 29, when the first Covid-19 case in India was detected only on January 30,” says Dr Bahubali Shah, former president of the Maharashtra Council of Homeopathy. “The question arises, where have they collected the data from? I’ve been asking for the source of data and size of sample since Day 1, to no response. At a time like this, we need transparency. Give us the analysis; tell us the three or four medicines that were considered, and why Arsenicum album 30 was picked as the genus epidemicus.” According to Shah, a genus epidemicus is considered a correctly identified prophylactic for a disease if more than 60 percent of patients respond well to it. “What sort of follow-ups have been done? If I am to declare this drug a prophylactic, I need to follow up with patients and see how they are reacting to it. It is the responsibility of the CCRH to fix a protocol for this.” Repeated calls from Forbes India to the office of CCRH director general in-charge, Dr Anil Khurana, went unanswered. 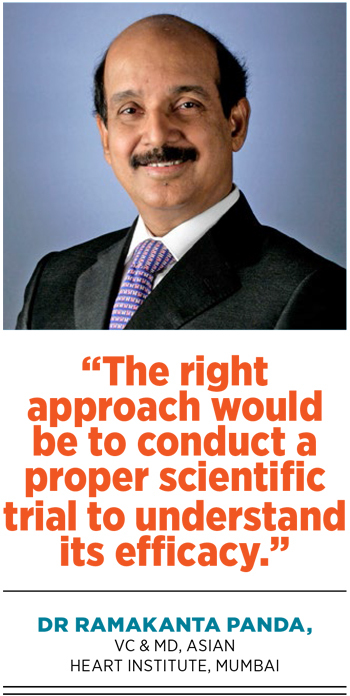 “The right approach would be to conduct a proper scientific randomised trial to understand the efficacy of the said homeopathic medicine,” says Dr Ramakanta Panda, leading cardiovascular thoracic surgeon, and vice chairman and managing director of Asian Heart Institute, Mumbai. “It can be used if the study findings suggest so. My concern, however, is that it should not give people a false sense of security. People should not become complacent and stop following the recommended preventive measures to avoid transmission of coronavirus—maintaining physical distance, wearing masks and frequent hand-washing.” Panda cites the example of hydroxychloroquine, which is under debate as a treatment in Covid-19 clinical trials. “The jury is still out on its efficacy,” he says. “It has now been found to cause heart rhythm problems in some patients, and therefore should be administered only under medical supervision.” There are two ways in which a human body develops antibodies against a virus to neutralise it, Panda adds: Administering clinically proven antiviral medication or vaccines; or supportive treatment to improve the body's immunity to fight. “The body’s immunity can be improved in many ways, including a good night’s sleep, regular exercise, consuming vitamin C and D, and so on—these have all been scientifically proven to increase immunity. However, Dr Anil Khurana [of CCRH] himself has said that homeopathy is being used in trials as an adjuvant, and not standalone.” The most effective way to prevent Covid-19, Panda adds, is if both parties in contact are wearing a mask and maintaining social distance. “These are protocols that can bring down your risk of contracting infection to 1.5 percent. No medicine can make that claim yet.” While there isn’t enough data to promote the homeopathic drugs as preventives in this pandemic, many believers say they could still do the job of boosting immunity, and since they are diluted, cause little in way of side effects. There are two issues when it comes to this—one is that with local corporators, NGOs and so on giving them out by the thousands, there are virtually no records of where and how the pills were prepared; the second is a false sense of security. If not diluted to the extent required, arsenic poisoning can be toxic, even causing cancers.

“If taken in the dosage that is suggested, there are few chances of side effects,” says Shah. “However, if I’m a layman, I could obtain three bottles from three different sources, and I might think that taking more medicine will make me more secure. The recommended dose is one a day for three days, but since they are not under direct doctor supervision, people could take it for 15 days, even three weeks. When you administer such a medicine to a healthy person, in large doses, it has the capacity to produce the very symptoms it is meant to cure. It is highly irresponsible to distribute it at mass levels.” “One of the bigger dangers is that it leaves the field open for any practitioner to advise any medicine, and depending on his or her sphere of influence, ensure that it is taken,” adds Dr Kushal Banerjee, consultant homeopath at New Delhi’s Dr Kalyan Banerjee’s Clinic, who consults with patients in 18 countries. “Clear instructions on continuing to follow public health advisories need to follow the prescriptions.” Dr Kalyan Banerjee’s Clinic, by March, had advised a homeopathic plan to about 15,000 patients in 18 countries. “One of the components of our protocol to improve immunity, keeping in mind the symptomology of Covid-19, includes Arsenicum album 30. But we’re also advising Eupatorium perf 30 and Lycopodium 30, two other generic, easily available homeopathic medicines. We feel that the rate of infection of something like Covid-19 and the parts of the body it can potentially affect are best covered by these medicines.” Even so, Banerjee is cognisant of the limited evidence available. “At the time the advisory came out, it was based mainly on an analysis of what symptoms were known to us. But we also conducted our own survey in March, to go back and see if it does have a protective effect. We got responses from about 11,500 people. We found that the protective effect is significant, but this is limited to our three-medicine protocol. We couldn’t get details from outside our practice.” “It’s important to point out that there are limitations to a study like this too, and we’re still in the process of getting it published and going through the hoops that you have to, to get something like this into the public domain,” he adds. “Some of the limitations are that we are all observing other protective measures as well. For homeopathy to be given all the credit is not correct either. But in terms of an evidence-based approach, and given that it is a novel entity, this is a small step in creating the best evidence that we have.” Banerjee adds that the doctors at his clinic have been asked to go out of their way to explain these limitations to patients—by May 1, about 50,000 patients had been given the protocol advice, along with the caveats. “It actually reduces interest in taking the medicine, but it’s what we’re ethically bound to do,” he adds. In the third month of the lockdown, as India begins to reopen with restrictions, there’s a lot of fatigue setting in even among those who have been extra careful. “People are tired of taking precautions,” says Banerjee. “So somehow, taking what you think will protect you against the virus may additionally feed that fatigue.”