Havmor, which had a humble beginning has been acquired by Lotte Confectionery for ₹1,020 crore, but the founding family has decided to expand the restaurant business 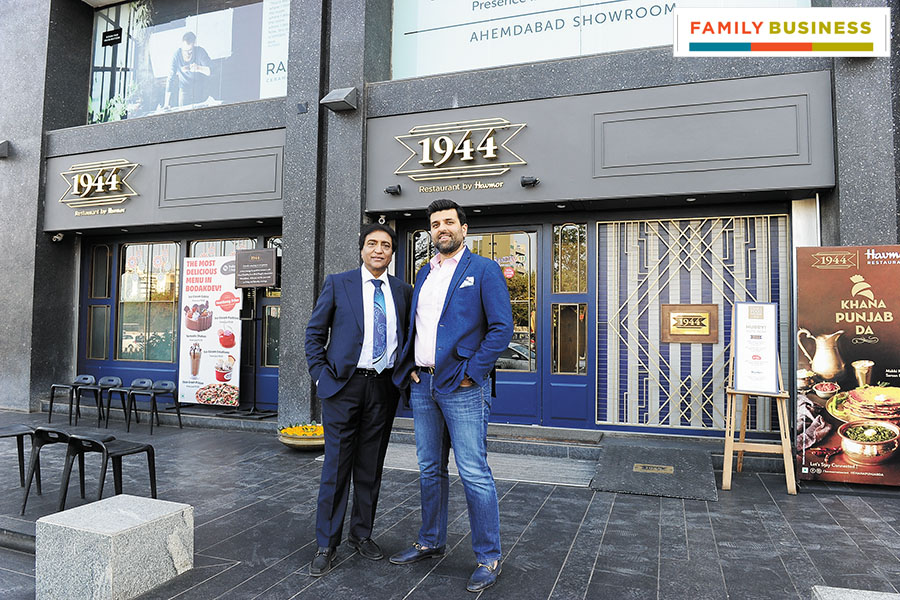 Pradeep Chona and son Ankit are now focusing on restaurants
What began as a humble entrepreneurial effort in Karachi 75 years ago grew to an almost ₹500 crore business (FY 2016-17). Adding flavour to ice cream maker Havmor’s journey was its acquisition by $110-billion South Korean major Lotte Confectionery for about ₹1,020 crore in 2017. “It [the acquisition] is like getting your daughter married… you have to let go and use your mind over heart at some point,” says Pradeep Chona, 64, chairman, HRPL Pvt Ltd (the parent company was called Havmor Restaurants Pvt Ltd prior to the sale).

The emotions are understandable. “My father, Satish Chona, learnt how to make ice cream from his uncle and set up a shop in Karachi in 1944. After Partition, he came to India, and went to Dehradun and Indore to set up an ice cream business, but it didn’t do too well. Finally he settled in Ahmedabad and started an ice cream and food brand, Have More, with the help of Kasturbhai Lalbhai [renowned industrialist and co-founder of Arvind Mills] in 1953,” says Pradeep.

Have More was renamed Havmor in the 1960s and during its initial days the focus was mostly on ice creams along with a couple of restaurants in Ahmedabad, including their first one in Kalyan Bhavan on Relief Road.

Ice cream, food and quality run in the family’s DNA. “While he was on a stretcher prior to a major surgery, dad (Satish Chona) called me. I thought he would ask me to take care of my mother and sister, and tell me where the will is kept. Instead, he told me he was not happy with the way they are cleaning butter and that I should attend to that,” recalls Pradeep, who did more than that by taking the Ahmedabad-based brand across Gujarat.

From owning a factory the size of a 400 sq ft room, the business blossomed to manufacture 2.5 lakh litres of ice cream a day. Pradeep’s son Ankit, 36, who joined the business in 2006 after completing his graduation from Purdue University, says ice cream was always a huge part of their lives. “As kids we used to order so much ice cream that dad had given specific instructions that our orders were not to be entertained. On a couple of occasions when it was not delivered, we called the office and lied that dad’s guests have come home and want to taste the ice cream,” says Ankit, who is managing director of HRPL.

Competition was intense when Ankit forayed into the business and despite their creative differences, both father and son worked together to take Havmor to greater heights. “We are different people. I am detail-oriented and Ankit likes to look at the bigger picture. To resolve our conflicts, we have a panel at home, our wives,” says Pradeep.

Since quality was paramount, the Chonas made investments to procure the best quality milk and cream.

Pradeep had one piece of advice for his son. “He told me starting from the bottom will pay off. It eventually did,” says Ankit. One of the major challenges he faced was transforming Havmor’s image from a Gujarati brand to a national one. “Outside Gujarat, the first market we entered was Mumbai in 2008. We went to Gujarati-dominated areas, put posters in Gujarati, had Gujarati distributors, salespeople… [but] this is not the way we could’ve become a national brand,” says Ankit, who then took it to various areas in Mumbai as well as pan-India. He also focussed on expanding the restaurant business across Gujarat.

“We started franchising, focusing more on different cuisines, even the different ways in which we serve ice creams in our outlets. From just about five or six outlets in 2006, we grew to about 50 food outlets and 150,000 ice cream parlours,” says Ankit, who claims 70 percent of the ice cream-eating population in India is in the 11 states —including Gujarat, Maharashtra, Uttar Pradesh—that Havmor has a presence in. Havmor even served ice cream lollipops costing ₹5 while its restaurants had ₹500 sizzlers.

But why expand only the ice cream business nationally? “Ice cream is very palatable; it is easier to scale up and set up plants. You can make it at one or two big facilities whereas with a restaurant, every unit is a mini factory in itself,” explains Ankit.

Before they sold the business, almost 80 percent of the company’s revenue came from ice creams. But rising costs were a factor. “We were one of the few companies in India that made ice cream with only milk and cream. The others started adding vegetable oil which was cheap (almost half the rate). Plus the ice cream business needs ₹40-45 crore for expansion every year. And there are a lot of overheads like godowns, machinery… 18 percent GST, 25 percent to distributors and dealers… we barely enjoyed a 3-5 percent profit margin,” says Pradeep. 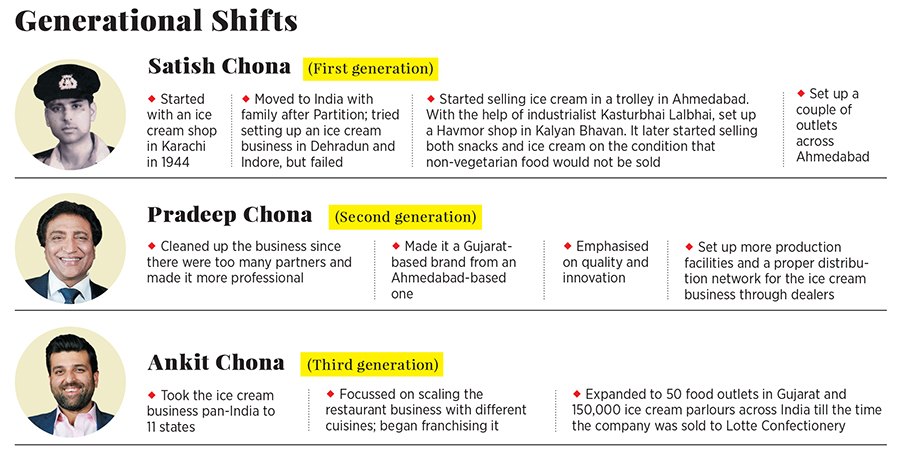 Anand Vermani, partner (consumer markets), KPMG Corporate Finance, who was involved in the acquisition, says, “Havmor has been one of the fastest growing ice cream companies in the country, with a revenue CAGR of over 20 percent, and a strong positioning in the ‘pure milk’-based ice creams.”

Both father and son were against the idea of selling the company till they got a neat and clean offer. And selling Havmor was not an easy decision. “The problem with most Indian businesses is that we are emotional about them. But at some point, one had to admit that the way things were, the risk reward was not in favour of keeping the business. It was growing at 25 percent, but it made sense to sell it because there is too much risk and turmoil in India,” says Ankit.

Post the acquisition, the Chonas’ biggest concern was that the employees should remain with the company. The family negotiated terms to ensure that Lotte wouldn’t fire any of the existing employees for three years. “When we broke the news [of the sale] to them, a lot of them were upset. Some staffers have been with us for over 30 years… it was emotional,” says Ankit. 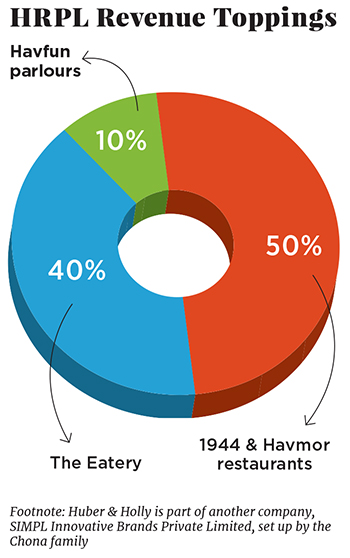 “Earlier if I saw a Havmor booth with the signboard light not working or a cloth hanging over it, I would send across a picture to my team, asking them to fix it. Now if I see that, I just look away,” says Pradeep, with a tinge of sadness.

But the two console themselves by saying that the brand continues to exist. “They [Lotte] have the capacity to take it to levels where we possibly could not have dreamt of… or they will take five years to do what we would have done in five decades,” says Ankit.

Vermani believes Havmor’s acquisition was a perfect fit for Lotte’s strategy of investing up to $5 billion in India over five years. “Havmor was a clear winner in all respects—professional standards, national expansion, stellar growth, pure milk-based ice cream and strong brand loyalty. It was a leader in the category of ‘available’ assets, extremely well balanced on counts of both growth as well as stability.”

Pradeep and Ankit are now starting almost from scratch. Under HRPL, the family owns several food outlets including the 1944 brand of restaurants, Havmor Restaurants, The Eatery as well as a couple of Havfun Parlours, which sell only Havmor ice creams, that they run as franchisees. That apart, under Simpl Innovative Brands Pvt Ltd (another company the Chonas own), they have Huber & Holly, which has three outlets, one each in Ahmedabad, Mumbai and Hyderabad. By March, they plan to open another 10 outlets across India. “Huber & Holly serves both food and ice cream, which run in our DNA. Our inspiration was the ice cream that we used to taste as kids, freshly churned from the factory… the texture is different. We wanted to make something which we have fun making and serving,” says Ankit. A production facility for 50 Huber & Holly outlets has been set up in Santej, Ahmedabad. The Chona family also intends to explore the nutrition space, but Ankit says it is too early to talk about it.

In the last year, HRPL has made close to ₹100 crore through all its restaurant brands. From setting up new offices and hiring new staff members, 2018 has been about cleaning up the business. In the coming year, the family will focus on setting up new restaurants as well as renovating and rebranding the existing Havmor restaurants to 1944.

“We are planning to rebrand all our restaurants to 1944 and go back to our roots. Although it’s a tall claim to make, we do have certain recipes that have not changed from 1944, like the chana puri. The spices that go into the chana are mixed at home once every 15 days and have been kept a secret, even now,” says Pradeep.

Tweets by @forbes_india
iPhones in India: From outstanding to an outlier
Rasna: Juicing it up