There is thus huge opportunity to take it to a different level, says the Joint Secretary of Department of Commerce, Ministry of Commerce and Industry, Government of India 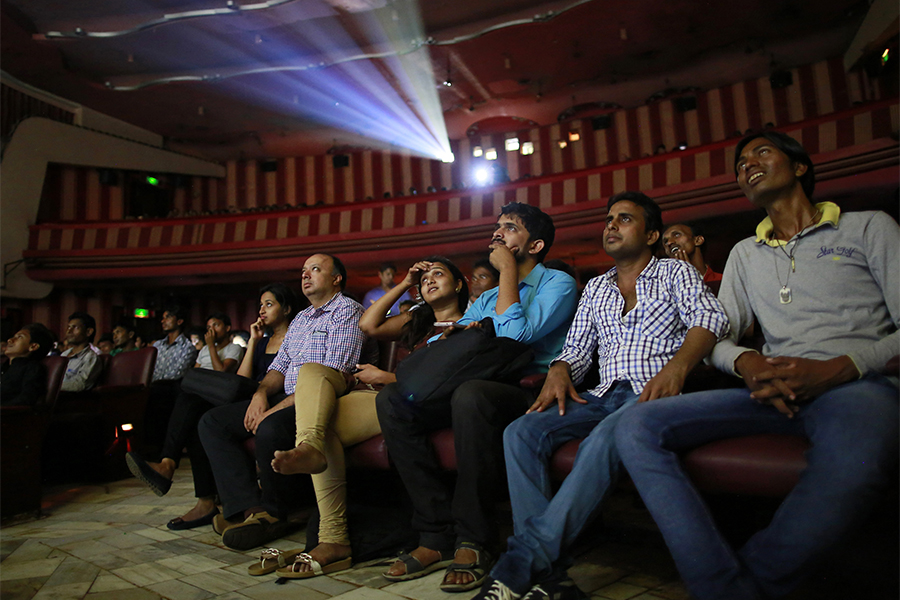 Image: Danish Siddiqui / Reuters (For illustrative purposes only)
It is well-known that India is among the leaders when it comes to the number of films produced annually. Yet, its share to the global film revenues is less than 7 percent. So where is the mismatch and what steps are being taken to address this? This was the question Sudhanshu Pandey, Joint Secretary, Department of Commerce, Ministry of Commerce and Industry, Government of India and Ajay Mittal, Secretary, Ministry of Information and Broadcasting tried to address during a session at the inaugural day of the three-day FICCI Frames 2017 event in Mumbai.

“India contributes less than 7 percent to global film revenues. We are today a little over a $2 billion of about $38 billion film revenue globally. By 2020, global revenue is expected about $50 billion, but we will be just about $3.7 billion,” says Pandey adding that the contribution of audio visual services, especially film industry, to exports is just $140 million of $156 billion. “There is thus huge opportunity to take it to a different level.”

The solution, he says is in first increasing the number of digital screen in the country. “Today, it is not merely content which will drive the growth of the film industry, but it is technology and digital medium which will be at the forefront of driving growth. We need to add at least 20,000 digital screens in India,” he says.

Highlighting the key issues which the media and entertainment industry in India face, Pandey says that an issue which has been plaguing the industry for a long time is: Piracy. “Piracy has led to de-growth of film industry. Especially websites hosted on foreign countries, which host the films on the day of their release in India,” he says. This could be addressed with more digital screens and “negotiations with other countries.”

Pandey adds that until a few years ago, Indian films were extremely popular in the foreign markets. “Now since neither the subtitling nor dubbing is happening – for various reasons- the market has been eliminated. We had a discussion within the ministry and said the ministry would be very happy to again work with the film industry if producers and distributors come forward,” he says.

Mittal, meanwhile, countered another important issue raised by Star India Head Uday Shankar earlier in day, regarding censorship. He said that the constitution of this country and the various institutions created by the constitution are strong enough to take on the challenges presented by fringe groups in their attacks on media or on creativity. “We have the fringes (but) we also have the rule of law. And we have these strong institutions to ensure that the rule of law prevails,” he says emphatically. He adds that they have already received a report by a committee chaired by Shyam Benegal about the working of CBFC (Central Board of Film Certification). The matter is now being considered by the government and soon some of the major concerns that have been expressed would be looked into.

Throwing light on the current state of the M&E industry, Mittal says that there are currently about 180 million TV households, more than a 1,00,000 registered newspapers and magazines, close to 2000 films produced annually and about 330 million plus internet users, of which 200 are mobile internet users. “Coupled with the demographic position of our population, a young population, we can imagine what kind of heights the M&E sector is poised to attain,” he says. Identifying the potential, the government, he says, has been providing ample support to the M&E industry. 177 new channels have been given licenses in the last two years, two phases of FM auction have taken place in which 164 new channels and as many as 103 cities have got license and we are going ahead with that because we feel this is one area where the potential still hasn’t been tapped.

Among the focus areas, Mittal says, is creation of content for kids. The government has been “aggressively trying to take the films we already have to the remotest part of the country, especially our young audience… and as part of this effort almost 6 lakh children have been to the screening of our children’s film during the current year.” They are also dubbing and subtitling of all our children’s film content so that it can be shown to the kids in their own language all throughout the country.

Proactive steps have also been taken to protect intellectual property both for the content creator and distributor, who look to monetise content. “We continue to push towards ensuring that IP laws are implemented and guard the industry against this problem of piracy. We are in touch with DIPP on the implementation of national IPR policy and the constitution of the copyright board to introduce policy measures so that IP rights of the entertainment sector are protected,” says Mittal.

“We have shown our standing in the domestic market and also expanded our footprint in the globally. Now, we just have to build on this to generate more revenues,” says Pandey.