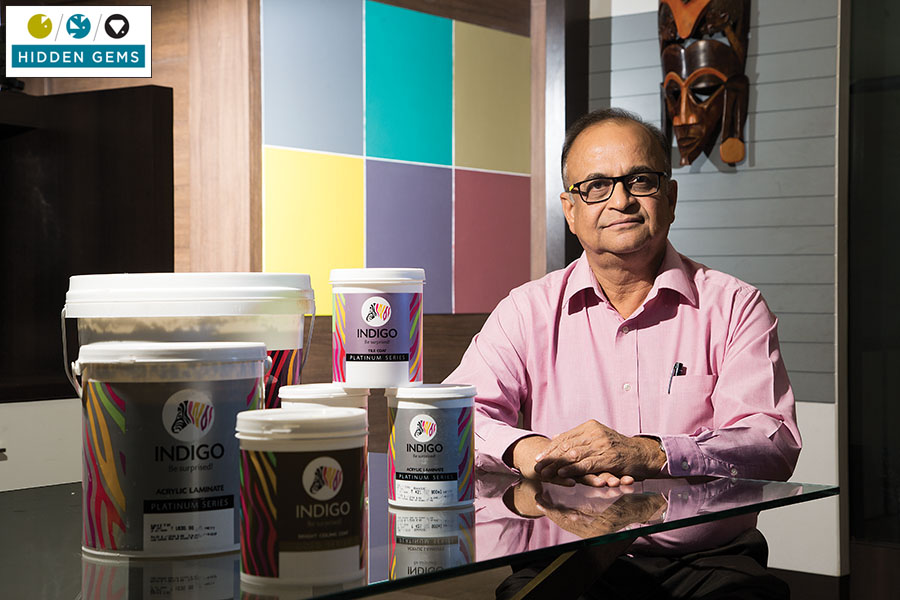 Hemant Jalan claims attrition at Indigo Paints is down to zero
Image: Gaurav Thombre for Fores IndiaAsk Hemant Jalan why he started a paint company and the answer is, “I wasn’t looking to start one; it started out as a joke.”

In 2000, the now-60-year-old IITian was in Jharkhand running his family-owned chemical unit. The area around his plant had several cement paint manufacturers and Jalan thought they didn’t have a lot of business sense. “If they could make a business out of it, why not forward integrate and start making it myself?” he remembers telling himself.

Jalan then set up his own cement paint plant in Jodhpur and started Indigo Paints the same year. According to him, although large parts of the paint industry in urban India have moved to emulsions, there is still a big market for cement paints where the binder is white cement. This is one level above lime wash paints or chuna.

He spent the first decade scaling up operations to ₹10 crore in revenue and describes the period as extremely challenging. There was nothing to distinguish his products from those of his competitors and Indigo’s size made advertising impossible. Scaling up the business was a slow and painful grind. Why would a paint distributor want to sell a me-too product unless he was offered a higher margin?

That was when Indigo embarked on a differentiation strategy that has formed the core of everything it does. After 2009 it started making metallic finish paints and while the company was too small to advertise the product, “there was a lot of enthusiasm among dealers”, says Jalan. Since then Indigo has introduced a special paint for ceilings, for tiles and for driveways—all products that have allowed it to expand its dealer network, which now straddles all of India except Jammu & Kashmir, Himachal Pradesh and Delhi.

While these products form only 25-30 percent of sales, they allow dealers to sell other paint products to customers, according to Abhay Pandey, managing director at Sequoia Capital. “These products are not so unique from an innovation standpoint as the technology to make them is easily available, but they allow the company to market its other products,” he says.

Pandey’s confidence in the company stems from this factor. He says he has seen several paint companies flounder as beyond a point they find it difficult to compete with Asian Paints, Berger Paints, Kansai Nerolac and Akzo Nobel; they are unable to match their pricing or distribution muscle. Smaller paint companies don’t have the same raw material sourcing strengths or the same economies of scale that allow them to amortise their fixed costs over a larger revenue base.

For the time being, Jalan has chosen to invest disproportionally in advertising Indigo’s products. Being a small company, he is conscious of the fact that he can only afford to spend on one brand and all advertising only carries the Indigo Paints name. After the Sequoia investment in two rounds—in 2014 (₹50 crore) and 2016 (₹90 crore)—the company decided to beef up advertising spends. As against 1-3 percent that national paint companies spend on advertising, Indigo spends over 10 percent. In 2014 it spent ₹12 crore. In 2017, the number had risen to ₹40 crore. The company recently signed World Cup-winning captain MS Dhoni as brand ambassador.

This advertising push is expected to continue for another two years, at least in the run up to the company’s IPO. In a sign of its continuing confidence in the ability of the business to keep growing rapidly, Sequoia has said it plans to exit gradually in tranches once the company goes public.

Another reason for Indigo’s fast growth has been the high amount of autonomy it has granted to its sales team. Jalan believes in hiring young sales executives and giving them stretch targets. “We regularly aim to grow our business in the same market by 50 percent a year,” he says. Upon meeting those targets, the company has a disproportionate reward system. It is not uncommon for them to earn 60-70 percent of their salary in the form of incentives. Add to that a lucrative ESOP scheme and Jalan says that attrition is now down to zero.

The results of Indigo’s strategy are plain to see. Over the last five years the business has compounded its topline at over 40 percent a year. It closed the year ended March 2018 at ₹450 crore in sales. Sales were up by another 48 percent in the first quarter of this year. With such rapid growth, Indigo has been confronted with the inevitable question: How long before it gets closer to the industry growth rate of 10-12 percent?

For now a large portion of its growth is dependent on the number of tinting machines the company is able to instal. These allow the distributors to prepare the exact shade of paint for the customer at their premises. The machines come with codes that can only be used to sell paints of the company that has installed them. Indigo has 2,000 machines installed at present compared to 40,000 for Asian Paints and 25,000 for Berger Paints. If the company can take this number to 10,000 in the next 2-3 years, the 40 percent growth is likely to continue, says Pandey before adding that a slower growth rate would also be acceptable as long as the company grows.