An early player in the medical diagnostics sector, it now has over 1,200 franchisees and plans to set up labs in every Indian city with an airport 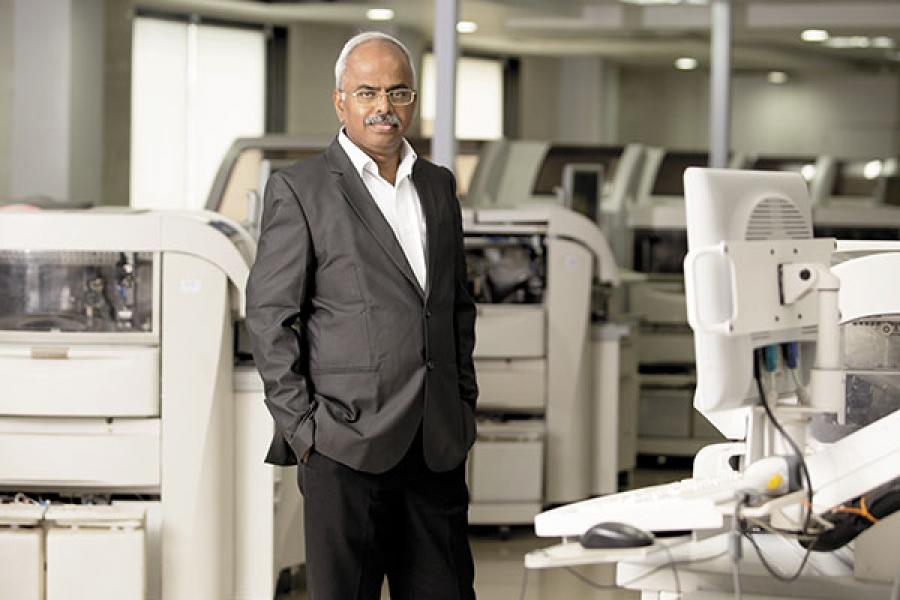 A 93.5-metre long lab automation track runs inside the central laboratory of diagnostics and pathology firm, Thyrocare Technologies, which specialises in thyroid testing. Its founder, Dr A Velumani, 56, proudly displays the laboratory in Vashi, Navi Mumbai, which is capable of processing 50,000 samples and conducting 2 lakh tests per day.

The lab is emblematic of Velumani’s business approach: High volumes, low costs and a single-minded focus on preventive healthcare. 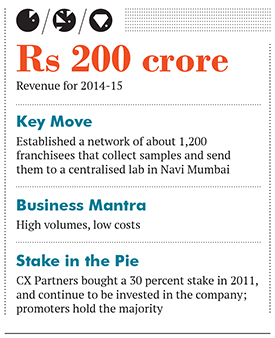 Founded in 1996, Thyrocare has seen steady growth over the years, owed in large part to its capital-light, franchise model. “The entire business had two parts: Procuring and processing. Procuring is difficult, processing isn’t,” says Velumani. “So I cut up the business and gave the procuring part to the franchisees.” This ensures that Thyrocare’s front-end is taken care of till the samples reach Mumbai by air cargo every day. They are then transported to the central laboratory in Vashi.

In FY2015, Thyrocare generated revenues of Rs 200 crore, a 17 percent increase over the previous fiscal. Up until FY2014, revenue growth had been higher and Velumani attributes the subsequent decline to high Ebitda (earnings before interest, taxes, depreciation and amortisation) margins. “Earlier, we had a 48 percent margin, but that was hurting our growth, so we’ve now lowered it to 42 percent this year by further cutting our prices,” he says.

In early 2011, Thyrocare’s business model and high gross margins attracted investment from New Delhi-based CX Partners, which picked up a 30 percent stake for Rs 188 crore, valuing the company at about $100 million (around Rs 600 crore).

The person behind it
Born in Coimbatore, Tamil Nadu, Velumani spent 15 years as a scientist, and left his job at the Bhabha Atomic Research Centre in Mumbai because he “wanted to do something different”. The immediate reason for starting Thyrocare was fairly straightforward: He had a PhD in thyroid biochemistry.

Using money from his provident fund, Velumani started his first lab in Byculla, Mumbai, in 1996. He soon began expanding to other cities. “The growth was pulled [by demand], not pushed,” he says. Since the business started generating cash from the first day, Velumani claims he did not have to borrow money ever. He continues to own a majority stake in the company.

Why it is a gem
Thyrocare is one of the larger players in the burgeoning Indian medical diagnostics market. Consulting firm PricewaterhouseCoopers (PwC) estimates this market, including radiology and lab diagnostics, to be worth $3.5 billion (Rs 20,000 crore).

Thyrocare has managed to keep its costs low by leveraging high volumes. It processes an average of 40,000 samples per day, the highest in the sector, claims Velumani.

Despite the presence of major players like Metropolis Healthcare, SRL Diagnostics and Dr Lal PathLabs, medical diagnostics in India is largely unorganised. “When we invested in Thyrocare, demand was being driven by the shift from the unorganised to the organised sector,” says Tarun Khanna, a partner at CX Partners. The gap exists even today. PwC estimates the size of the organised sector to be only about 15 to 20 percent of the total market.

Thyrocare’s scalable model has enabled it to double the number of its franchisees from 600 to over 1,200 in just four years. However, its founder has, of late, softened his hitherto rigid philosophy of having a centralised laboratory for the entire country. “Technology is reaching every nook and corner of the country,” says Velumani. “So if we don’t spread ourselves out, our growth may suffer.” He now plans to have a laboratory in every Indian city with an airport. He has already opened smaller labs in Coimbatore, Bengaluru, Hyderabad and Delhi.

Thyrocare’s investors are now planning an exit. Both Velumani and Khanna have confirmed that an IPO may be in the offing. The investors expect the company to be valued at Rs 1,800-2,000 crore, says Velumani.

Why it was hidden
Thyrocare is not so much a hidden gem as it is a gem that is not properly displayed, quips its promoter. Velumani attributes its lack of recognition to his own hesitation to be in the limelight. He says despite the recent attention that the sector has got, many people do not completely understand the business.

Although Thyrocare remained largely unknown in its early years, an investment by Brand Capital, owned by Bennett, Coleman and Company Limited, in 2006 changed that. “I took an exposure [risk] of Rs 25 crore and splurged a large part of it on full page ads in their newspapers,” says Velumani. Brand Capital has exited since.

Risks and challenges
A franchise-based model has its own limitations. Initially, Velumani gave a franchise to anyone who applied, but he realised that everyone is not equipped to be an entrepreneur. “We now reject about 25 percent of the people who apply,” he says.

There is no denying the fact that medical diagnostics is an increasingly crowded space. Low-entry barriers mean there is a rapidly increasing number of players.

Challenges pertaining to retail businesses replacing legacy businesses will also apply to Thyrocare, believes Velumani. “Of course, disruption can come any time,” he admits, adding quickly, “I intend to disrupt too, so I needn’t worry.”