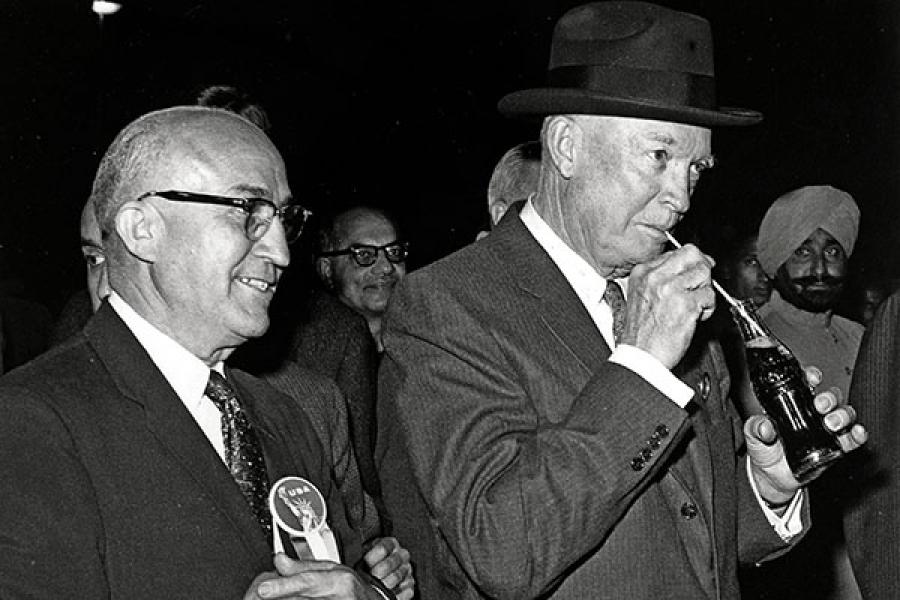 Image: Getty Images
US President Dwight D Eisenhower enjoys a Coca-Cola during an American exhibition in New Delhi in 1959. Eisenhower was US president from 1953 to 1961

The latter half of the 1970s was a tumultuous period in Indian politics fuelled by a wave of anger towards the Indira Gandhi-led Indian National Congress, which had declared a state of emergency on the nation between 1975 and 1977.  In the general election of 1977, held after Emergency was withdrawn, the Congress lost its seat of power to the Janata Party, formed by an amalgamation of non-Congress parties, and led by Prime Minister Morarji Desai and other leaders.

At the time, several international companies, including IBM and Unilever, had a presence in India. However, it was becoming increasingly difficult for them to operate effectively because of the Foreign Exchange Regulation Act (FERA), which had come into effect in 1974. Under FERA, the country placed a cap on foreign equity participation at 40 percent, though the limit was higher for pharmaceutical companies. The newly elected government’s decision to become more insular and focus on promoting agriculture, rural and indigenous industries made the economy unsuitable for multinational companies (MNCs).

According to data from the Reserve Bank of India (RBI), at least 54 companies applied to exit India. By 1978, Coca-Cola, IBM, Mobil and Kodak had already quit India or had applied to do so. Coca-Cola, for instance, was the leading beverage giant until it chose to exit the country because of FERA norms and the Janata government’s insistence that it reveal its secret formula.

In his book India: From Midnight to the Millennium and Beyond, Congress leader Shashi Tharoor writes about this period: “Heedless to the signal these exits sent to the world—whose brief hopes that a change of government might have led to a more welcoming investment climate were poured down the same drain as the Coke—the Janata ministers chose to celebrate the departures of these multinationals as a further triumph for socialism and anti-imperialistic self-reliance.”

Economic data showed that India grew by 7.2 percent in the 12 months leading up to March 1978. This was led by encouraging trends in both agriculture and industry from the previous year, but the pace of growth was still lower than some South East Asian economies. India’s export of manufactured goods was growing at an annual rate of 0.1 percent until 1985.

“The biggest impact of MNCs exiting in the 1970s was that in the 14-year period till economic liberalisation [in 1991], it gave Indian companies managerial access to dominate the market,” says Anis Chakravarty, senior director with Deloitte India. It saw the birth of brands such as Thums Up, and the rise of new Indian companies such as Infosys, Wipro and Maruti Udyog in the ’80s. But the incentive to innovate died down in this monopolistic regime, as manufacturing was largely to meet domestic needs.