A growing middle-class in India and losses in US and European indices are expected to keep gold prices high, making it a bankable investment option 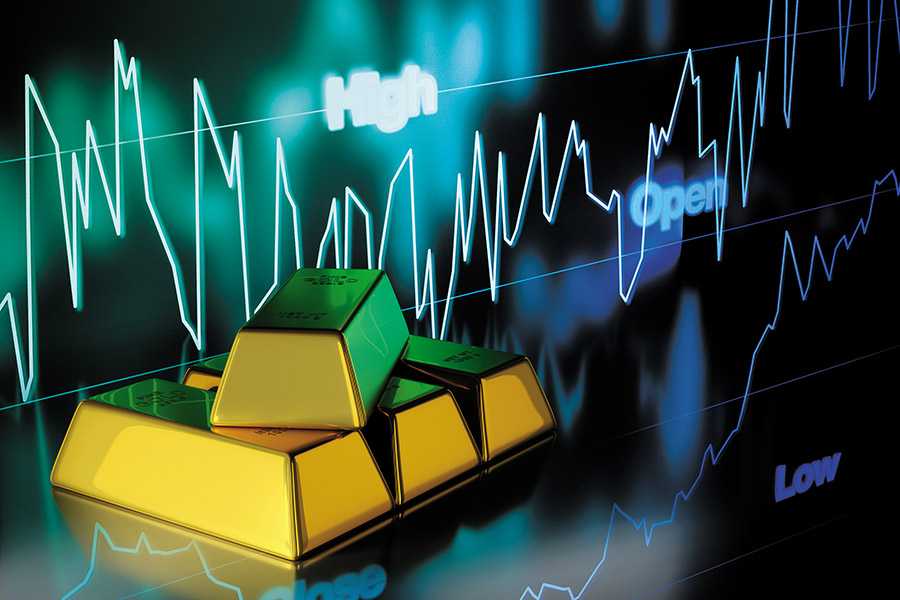 Ever since gold prices have been on the rise in 2020, there has been a flurry of activity at wealth management firms such as Cube Wealth, which is in partnership with digital gold platform SafeGold. As with stocks, demand for digital gold as an investment has been on the rise this year, in anticipation of prices moving up further.

The recent slide in global equity indices and weak interest rates have led to this fresh attention to gold as an investment option.

“We have seen a near doubling of customers from a year ago and a 15 percent jump in transactions since last December,” says Gaurav Mathur, founder and managing director of SafeGold, which has about 10 million customers in India.

People can buy, sell, gift or take delivery of 24 karat physical gold at any denomination online for a transaction fee. SafeGold’s daily transactions is worth ₹2.5 crore and about 6 to 8 kg, says Mathur. The gold price is based on the commercial local bullion market price.

All major European and US equity indices have registered near or more than double digit losses in the four weeks to February 29. Expectedly, gold prices have firmed up. International gold prices are at a near seven-year high of $1,609 per troy ounce (₹37,508 per 10 gm), its highest level since February 2013. Domestic bullion prices in Mumbai were trading at ₹43,180 per 10 grams.

India’s tendency of buying gold during uncertain times is playing out again. According to latest data from Association of Mutual Funds in India (AMFI), gold Exchange Traded Funds (ETFs) witnessed a net investment of ₹202 crore in January 2020, compared to just ₹27 crore in December 2019.
In the past, the global economic crisis of 2008 had seen investors worldwide scurrying for safer options such as gold and the US dollar.

Prices between mid-2012 and 2016 fell due to a strong dollar and stronger global equities. Since mid-2018, prices have risen around 30 percent to current levels.

History shows that gold and equities share a weak correlation, which means that they rarely move in tandem.

Amid the trade war, the People’s Bank of China bought gold—unlike in previous years—as a reserve policy to safeguard the economy from repercussions of the trade conflict with the US. All of these factors helped international and domestic prices remain firm.

In India, investors seeking to buy gold in the form of jewellery behave very differently from those seeking to buy gold as an investment. The demand is extremely price elastic, which means any price movement results in substantial change in demand or supply.

“Demand for gold fell in the last quarter due to higher prices,” says Somasundaram PR, managing director, WGC India. Gold jewellery demand in the last quarter was at 544 tonnes, driven by the buying and gifting of gold before or during the 8 million weddings that take place all year round in India.

Central banks across the world are also likely to continue buying gold, which could keep prices high.

In that scenario, volatile gold prices and weak global economic activity is likely to keep consumer demand “soft” in the near term, the report adds.

“In 2020, as prices are likely to remain elevated, demand, particularly for jewellery, will be driven by income,” says Somasundaram. In those terms, the growth in economic activity and incomes in India will have a major impact on demand for gold in the next 10 years.

By 2030, India will have the largest middle-class in the world. By that time, nearly 80 percent of incremental spend will be led by middle-income consumers, shows research from Bain & Company and the World Economic Forum.

Somasundaram is optimistic that over the next three years, India’s gold demand will move back up towards the 850 tonnes to 1,000 tonnes levels seen during the 2010-2015 period.

“As prosperity increases, and the faster people move towards the middle-class, they will first buy gold,” he says.

Gold-related policies in India remain muddled at best in recent years. The government has eased regulations by scrapping the 80:20 export obligation on importers of gold, has lifted a ban on import of gold coins, has launched the Sovereign Gold Bond (SGB) Scheme and has changed legislation to make hallmarking mandatory since 2017.

But along with this, the government also implemented demonetisation in 2016 and hiked the import duty on gold to 12.5 percent in 2019. A constant shift in policies has resulted in the trade and investors being unsure of the future direction of regulations could take. 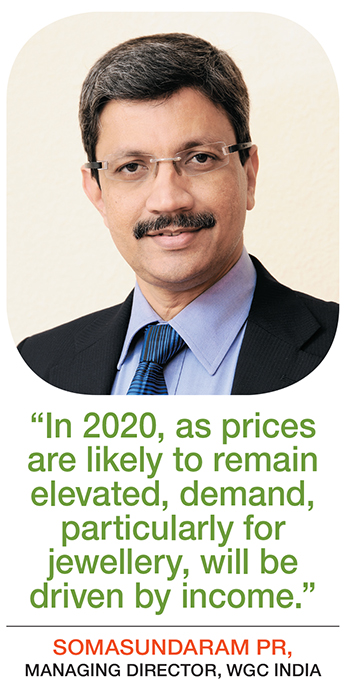 China hurting, stay invested
Though there has been no on-the-ground study of how the Coronavirus outbreak is impacting gold demand and trade in China, Somasundaram says that demand will be affected considering that it peaked during the Chinese New Year on January 25. Demand will also depend on how other asset classes move globally in coming weeks.

Currently there is demand for gold as an investment option, and this trend is likely to sustain. “The demand at higher [price] levels will not be robust,” says Mathur of Anand Rathi Securities.

Experts advise that investors should plan to allocate 7 to 10 percent of their portfolio towards gold, with the assumption of a gain in 2020. Gold bonds and ETFs are both good options available for retail investors.

In the case of ETFs, investors will have to pay a sum as an expense fee to a fund house, plus storage and custodian charges. Digital gold firms such as SafeGold charge customers a fee for keeping physical gold in secure vaults.

Less tech-savvy investors could consider the government-backed SGBs, which offer an interest rate of 2.5 percent (without compounding) and has a maturity period of eight years.

Price volatility will remain a serious risk for investors to consider, but they would be worse off if they completely ignore investing in gold this year.

Tweets by @forbesindia
Portfolio planning: Overseas stocks, now within reach
Why your best idea may be your second favorite