There is growing interest in American and European stocks and bonds. A few investors have made their first trade 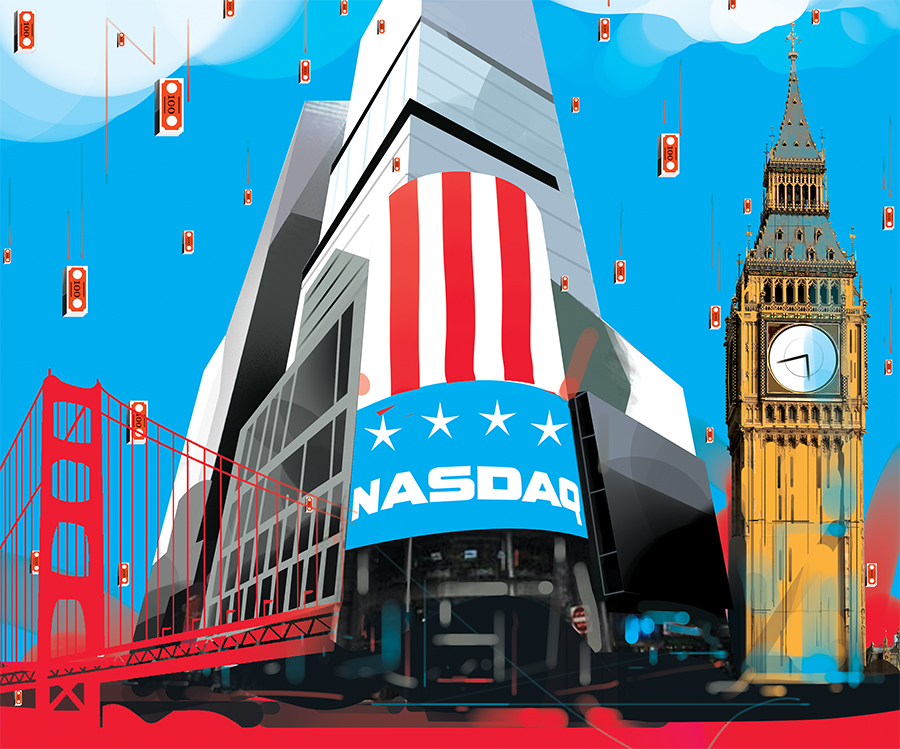 For Anand Shankar, investing in the US markets was a natural choice. His day job at a private equity firm meant he had the skills to analyse companies and take a call on their growth potential. “Earlier, I would have diversified my investments by investing in gold or real estate. Now that I have a choice, I believe the US markets are a better bet,” says Shankar, 35, who had been a regular investor in Indian markets.

Shankar made his first investment in US stocks last year by allocating a fourth of his 2019 savings. News of audit shenanigans and promoter-pledged holdings that reduced shares in several Indian companies to penny stocks spooked him. He sees the aggressive enforcement by the Securities and Exchange Commission or SEC (the US equivalent of the Securities and Exchange Board of India or Sebi) as key to safeguarding his interests. “That said, scams like Enron have happened there as well,” he points out.

Shankar is among the pioneers of a trend that, while still in its infancy, is expected to grow rapidly over the next few years. In the past, rich Indian investors (defined as those with a net worth of over ₹100 crore) would diversify their holdings either by investing in overseas real estate, equities or debt. Money was routed through Mauritius or other jurisdictions that offered favourable tax treatment before being sent on to Dubai, the UK or the US.

Now, the Liberalised Remittance Scheme (LRS) that allows residents to send up to $250,000 per person per year overseas and the emergence of platforms like Stockal and Interactive Brokers that allow direct purchase of overseas stocks have opened up a new investible universe. In 2018-19, $422 million was spent on buying equity and debt instruments outside India, according to the Reserve Bank of India. Compare that to the $3.5 billion spent on overseas education or $4.8 billion spent on travel and it becomes clear that there is immense room to grow in the years to come. As Shankar explains, “Most of my friends and family are not even aware that this is possible.”

The financial planning industry is playing a crucial role in getting people introduced to overseas investments. Unlike earlier when only family offices or those with a net worth of ₹100 crore or above would take this route, planners talk about professionals with an investible surplus of ₹2-3 lakh a month as potential clients. Unlike portfolio management services, where Sebi has imposed a ₹50 lakh minimum investment cap, there is no minimum threshold for investing overseas. The emergence of index funds and ETFs allows investors to make small investments. Planners also point out sotto voce that the underperformance of the Indian economy is also playing on the minds of potential investors. 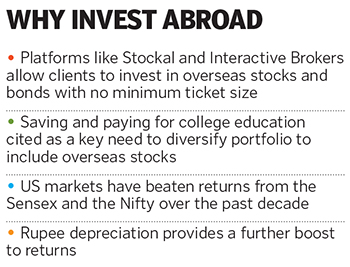 The chief reason for starting overseas investments is the need to pay for college education. According to S Harikrishnan, founder and managing partner at Blue Lotus Capital, his clients have seen the cost of college education in the US rise from about $45,000 (₹31.5 lakh) a year in 2005 to $70,000 (₹49 lakh) now, an annual increase of 3.2 percent. But in rupee terms, the cost has risen at 7.4 percent a year. A growing number of his queries focus on how to save for upcoming college education. As of now he says clients start a couple of years in advance, but with growing awareness, he sees them starting much earlier. Other reasons include saving for overseas vacations, settling abroad and acquiring dual citizenship.

Another reason has been the decadal outperformance of the US markets. Global investors have lapped up FAANG (Facebook, Amazon, Apple, Netflix and Google) stocks. Stories of Tesla’s recent outperformance are regularly discussed in Indian investor forums.

In the decade from 2008, the top 100 stocks on the Nasdaq returned 12.2 percent a year, outperforming the 8.4 percent Nifty return during the same period. They also outperformed a host of other asset classes from emerging market stocks (-0.1 percent) to high yield bonds (5.1 percent) and gold (3.2 percent) to commodities (-5.3 percent). 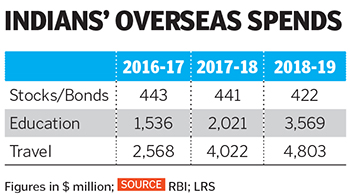 “The depth of overseas markets makes them attractive from an investor’s point of view,” says Mitesh Shah, co-founder and CEO of Credence Family Office. He cites examples of being able to invest in universities and football leagues, something that is not possible in India. There is even a PAWZ ETF—centred around pets—that has returned 15.1 percent in the past year.

In the past, buying overseas stocks and bonds meant registering with a broker and reams of paperwork. Now Indian brokers are working to make it easier. Here’s how it works: An individual after completing the ‘Know Your Customer’ requirements would make an application under the LRS scheme to their bank.

Forms still have to be physically signed and submitted to the bank. “We are trying to get the process digitised,” says Sitashwa Srivastava, founder and CEO at Stockal. The site has tie-ups with HDFC Bank, Yes Bank and a host of wealth management firms to get clients to invest and is on track to have investments of ₹50 crore through its platform by March 2020.

Unlike domestic brokers who offer low priced or free trades, Stockal charges $6.99 per trade irrespective of its size. Subscription plans starting at ₹3,999 a year reduce that to $1.99 a trade. Srivastava says the median investment amount on the platform is $5,000 (₹3.5 lakh). Investors have shown interest in European equities and bonds as well. A digital LRS approval would make life a lot easier for clients, he says.

As retail investors make their first trades abroad, they’re also cognisant that the US has had its longest bull run in history. Still, first-time investors who’ve dipped their feet are optimistic. “While I am still exploring I believe there is better value and growth in overseas markets,” says Swapnilsagar Vithalani, CFA, who made his first trade seven months ago and has 10 percent of his portfolio invested abroad.