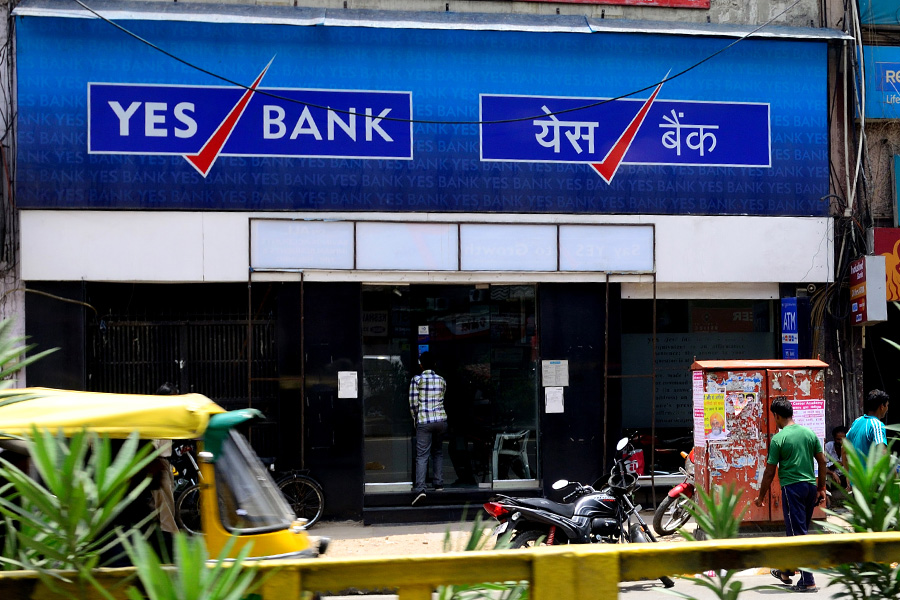 Photo: Pradeep Gaur/Mint via Getty Images Troubled private lender Yes Bank swung into a net loss for the three months to December 2019, from a profit a year earlier. The bank—which is currently under a moratorium—also saw a sharp deterioration in asset quality and had to increase provisioning for bad loans. But the most alarming data point is that its common equity Tier1 (CET1), a key matrix, was at 0.60 percent against a minimum regulatory requirement of 7.37 percent. Yes Bank reported a net loss of Rs 18,564 crore for the September to December 2019 quarter, from a profit of Rs 1,002 crore a year earlier. The bank had reported a loss of Rs 600 crore in the previous (July-September) quarter. Gross NPAs for the bank have risen to 18.87 percent, (Rs 48,495 crore) from 7.39 percent in the previous quarter, and provisioning coverage ratio for bad loans to 72.7 percent from 43 percent. Yes Bank also reported a fall in deposit growth in both current accounts (-20.6 percent) and savings accounts (-33.2 percent). The government has now approved the RBI’s Yes Bank reconstruction scheme, through which the State Bank of India, along with a host of domestic banks, will infuse capital into the bank. SBI’s board has approved a plan to invest Rs 7,250 crore into the reconstructed Yes Bank, to retain within 49 percent stake in its paid up capital. Minority shareholders who hold the Yes Bank stock, will also have to hold 75 percent of their stock for a period of three years, the finance ministry has said. The moratorium, with a withdrawal limit of Rs 50,000 per bank account, will be lifted on Wednesday, March 18, at 6 pm. The regulator has also superseded the existing board of Yes Bank. The bank’s current administrator will be the new CEO and managing director, replacing the previous CEO Ravneet Gill, while Sunil Mehta will be the non-executive chairman.

Yes Bank has over the past near two years seen a complete loss of confidence from the investor community, both in India and overseas. The problems for the bank emerged publicly, after the RBI denied an extension to its founder promoter Rana Kapoor beyond January 31, 2019. The RBI had highlighted “serious lapses” in corporate governance and “poor compliance culture” during his tenure. The RBI has also noted a divergence in reporting of non-performing assets twice, which was one of the reasons for not granting an extension of term to its founder-promoter Rana Kapoor. Kapoor has sold his entire stake in Yes Bank; the family-owned entity Yes Capital (India) holds a token 900 shares in the bank. Several of Kapoor’s well-known loyalists have also left the bank since Deutsche Bank’s India head Ravneet Gill became Yes Bank CEO, in March 2019. Gill and the board were superseded by the RBI earlier this month.
Show More
Thank you for your comment, we value your opinion and the time you took to write to us!