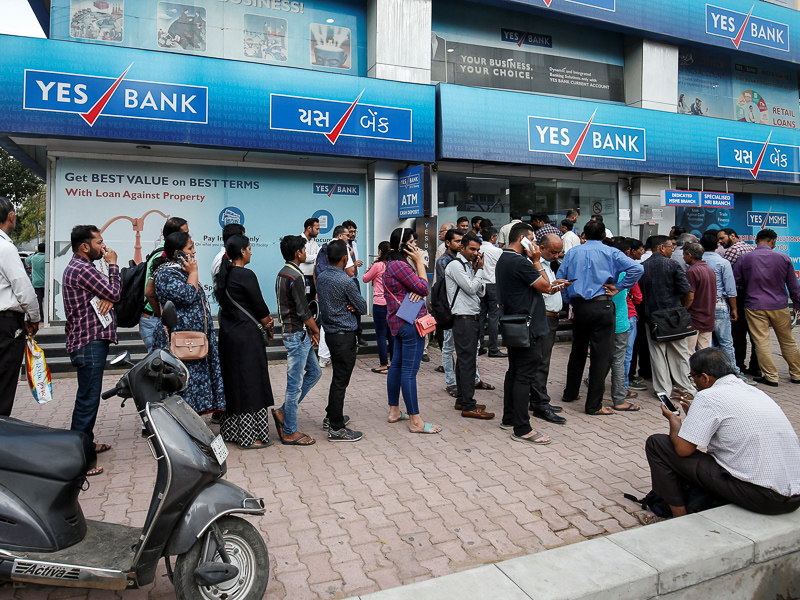 Troubled private lender Yes Bank will undergo a complete restructuring, through which government-owned State Bank of India (SBI) will invest in the reconstructed bank to hold a 49 percent stake, India’s Finance Minister Nirmala Sitharaman told reporters on Friday. This comes a day after Yes Bank was placed under moratorium by the government even as depositors continued to scurry to withdraw amounts deposited with the bank.

Details of the Yes Bank reconstruction scheme have been placed on the Reserve Bank of India (RBI) website, awaiting comments by Monday, March 9.

The government has also asked the RBI to investigate into what led to Yes Bank’s problems and the roles played by several individuals in creating the crisis.

“There are some very clear messages we are sending out. All depositors’ money will be safe. Yes Bank will not be allowed to fail. No institution will be allowed to fall off the cliff,” Sitharaman told reporters. Sitharaman took pains here to politicise the situation that brought Yes Bank into the mess it is under. “Exposure of Yes bank to stressed corporates is before 2014,” she said. She then went on to name some of the troubled companies to which Yes Bank had an exposure: including the Reliance Group (led by Anil Ambani, Essel Group, IL&FS, Vodafone Idea and DHFL). “I have reasons to blame the previous government. How many people did they take action against [between 2004 and 2014]?

Prior to the RBI proposal and Sitharaman’s comments, the Yes Bank stock tanked as much as 85 percent, to a low of Rs 5.55 at the BSE, before closing  at a decade low of Rs 16.2—still down 56 percent from the previous close. The SBI stock fell as much as 10.7 percent intraday before closing at Rs 270.45, down 6.19 percent.

Both stocks are likely to see a turnaround on Monday once the contours of the reconstruction scheme are understood and finalised, and panic relating to the future for Yes Bank subsides.

“The contours of how much SBI has to invest in Yes Bank will need to be studied. But it is clear that with SBI’s entry, the reconstructed bank will be better placed to find more capital,” an analyst with a local brokerage said, declining to be named.

How Yes Bank will be restructured
The authorised capital of the reconstructed bank shall stand altered to Rs 5,000 crore and the number of equity shares will stand altered to 2,400 crore of Rs 2 each, aggregating to Rs 4,800 crore.

SBI will not reduce its holding in the new bank to below 26 percent before three years from the date of infusion of the capital.

The reconstruction of the bank has come about after the RBI and the government arrived at the conclusion that the Yes Bank management was unable to raise fresh capital swiftly. The names of various international investors keen to invest into Yes Bank have been doing the rounds in recent months: Capital International, Citax Holdings and Citax Investment Group, Discovery Capital and Ward Ferry.

By January this year, the stake of Yes Bank’s founder-promoter Rana Kapoor in the bank had come to zero, thus losing him control and voting rights. Commenting on the time given to the new management to find new investors, Sitharaman said, “We had to give them space and margin to operate in.”

SBI expressed willingness to invest in the new bank and bring in equity required for the process. The administrator will help form a new board.

Prashant Kumar, administrator at Yes Bank, in a statement has said, “A solution is being worked upon to revive the Bank well before the moratorium period of 30 days ends. The Bank is also taking necessary steps to ensure seamless transactions for the customers.”

Depositors struggle
But this has been far from the truth. Forbes India was in touch with several several depositors who were struggling to withdraw their sums, which have now been limited to Rs 50,000 per account. There were serpentine queues at several of Yes Bank’s branches in Mumbai. But in several cases, depositors were unable to withdraw any amount from Yes Bank ATMs or those from other banks through their Yes Bank credit/debit cards. Yes Bank officials, declining to be named, admitted that cash transactions at ATMs have been paused for now.

In Delhi, investors who approached Yes Bank were merely issued tokens, which they will need to bring tomorrow (Saturday, March 7), to withdraw the requisite amounts.

Other startups also faced pressure from the depositors’ frenzy to withdraw cash. Fintech firm PhonePe said it faced a complete outage after the Yes Bank moratorium, while other startups including Flipkart, Swiggy and Makemytrip were also impacted.

Whatever be the manner in which the bank gets reconstituted, depositors are, once again, facing the roughest end of the stick. They can only hope that all this will end by April 3.