LIC IPO: No assurance ahead

With dipping tax revenues, the government is starting the process for LIC's listing in the face of headwinds such as asset quality concerns and an untested primary market 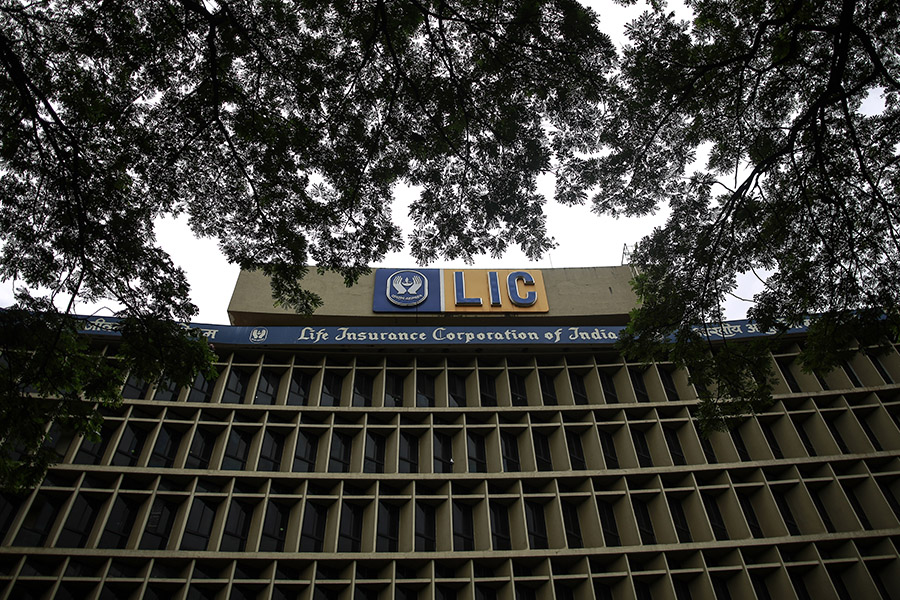 The government is putting the wheels into motion for the partial disinvestment of one of its prime assets: Life Insurance Corporation (LIC) of India, five months after Minister of Finance Nirmala Sitharaman announced an ambitious ₹2.1 lakh crore-disinvestment target for FY21. This target is four times higher than the disinvestment it achieved—₹48,417 crore—for the year ended March 2020. Two advisors to the pre-IPO transactions will be chosen in the coming weeks, who will be involved in preparatory work ahead of the IPO, and advise and assist the government on the timing of the minority stake sale as well as the capital structure of the institution. The Department of Investment and Public Asset Management (DIPAM) has clarified that a separate team of legal advisors will decide on the embedded value of LIC. Book runners to the issue will be chosen in coming quarters. The government—which has a 95 percent stake in LIC—is yet to decide on the quantum it seeks to sell through the IPO and the timing of the offering. Finance Secretary Rajiv Kumar’s assessment of an offering in the second half of the current fiscal year was made prior to the coronavirus outbreak. But if LIC seeks to repeat the success of Coal India in 2010—becoming India’s largest such offering with bids for ₹2.36 lakh crore, more than 15 times its target of ₹15,475 crore—it will need to move fast. LIC is India’s largest insurer and a leader in market share but there are several headwinds: Asset quality concerns continue to impact its balance sheet, it is losing market share to private insurers, there are growing employee concerns over privatisation moves and uncertain market trends that are likely to impact the offering at the time of listing.  Having muscle
LIC, which is India’s largest financial institution and insurer, had 66.24 percent of market share in total first year premium and 74.71 percent share in new policies in FY19. Its total net premium is over three times that of the combined amount of the top three listed life insurers—SBI Life, ICICI Prudential and HDFC Life. LIC still largely sources its business through its agents—a network of 11.8 lakh and 3,642 branches across India—while other private insurers acquire their business mainly through bancassurance channels. “The government is actually planning to divest in a public sector undertaking that is at the top of its game. The disinvestment is not happening when the asset has been bled dry,” says Gaurav Rastogi, Singapore-based founder and CEO of online mutual fund investment firm Kuvera. Rastogi, whose firm has several high net worth clients, is confident that the LIC IPO could see a “huge demand” when it hits the market. India’s life insurance penetration, measured by insurance underwritten to GDP, was at 2.75 percent in 2018, compared to 16.8 percent for Hong Kong and 6.72 percent in Japan, according to the Insurance Regulatory and Development Agency of India (IRDAI). India’s insurance protection gap, which indicates protection lacking as against protection required, is estimated to be $8.59 trillion, according to independent valuation firm RBSA Advisors. These indicate the well-accepted view that insurance offers strong growth opportunities in the years ahead. The awareness for the need for a life, or even non-life, insurance policy has increased in the post Covid-19 world. “In the post-Covid era, the consumer perspective of an insurance product will change, from being a push product all these years. Consumers are inquiring more about insurance products as uncertainty increases,” says Mangesh Ghogre, executive director and head of equity capital markets, Nomura India. Nomura Financial Advisory has been active, having participated as advisors and sellers to the HDFC Life offering, SBI Life’s recent offer for sale, and the New India Assurance offering in 2017. Losing share
From being a monopoly player in previous years, LIC has continued to lose market share to the private players SBI Life, ICICI Prudential Life, HDFC Life and Max Life. LIC has focussed too much on endowment and pension policies in recent years, moving away from their one-time favourite Ulip products, which offer strong margins. In recent years the first-year premium collected across single and group policies by private life insurers has been higher than that of LIC. Much of this is due to an aggressive digital drive from the new listed insurers. LIC also continues to operate on a low case-size, where per policy annual premium is around `15,000. This means while policy sales become easier, they need to sell more to maintain the pace of growth each year through their network. The LIC management declined to comment on their future strategy and plans for the government’s stake sale. In the absence of data from LIC, valuing an institution such as this will always be a challenge. Unlike corporates, for insurance companies the embedded value or the implied value of new business are important matrix to determine valuations. But LIC does not disclose these figures. Experts thus prefer to look at a valuation multiple based on assets under management (AUM), which offer a perspective into the sum total of all renewals that have come over the years and withdrawals paid to policyholders. RBSA Advisors, in their note to clients, says, “We believe the reasonable range for the valuation of LIC may be between 30 percent to 35 percent of its AUM.” This works out to ₹9.9 lakh crore to ₹11 lakh crore, on the basis of market cap as a percentage of AUM. An internal note prepared by a Mumbai-based leading investment bank pegs LIC’s valuation to be at ₹9.72 lakh crore based on the same parameter. This would make it Asia’s second largest insurance company after China’s Ping An Insurance Group, whose valuation is estimated to be ₹15.1 lakh crore, in terms of market cap as a percentage of AUM. 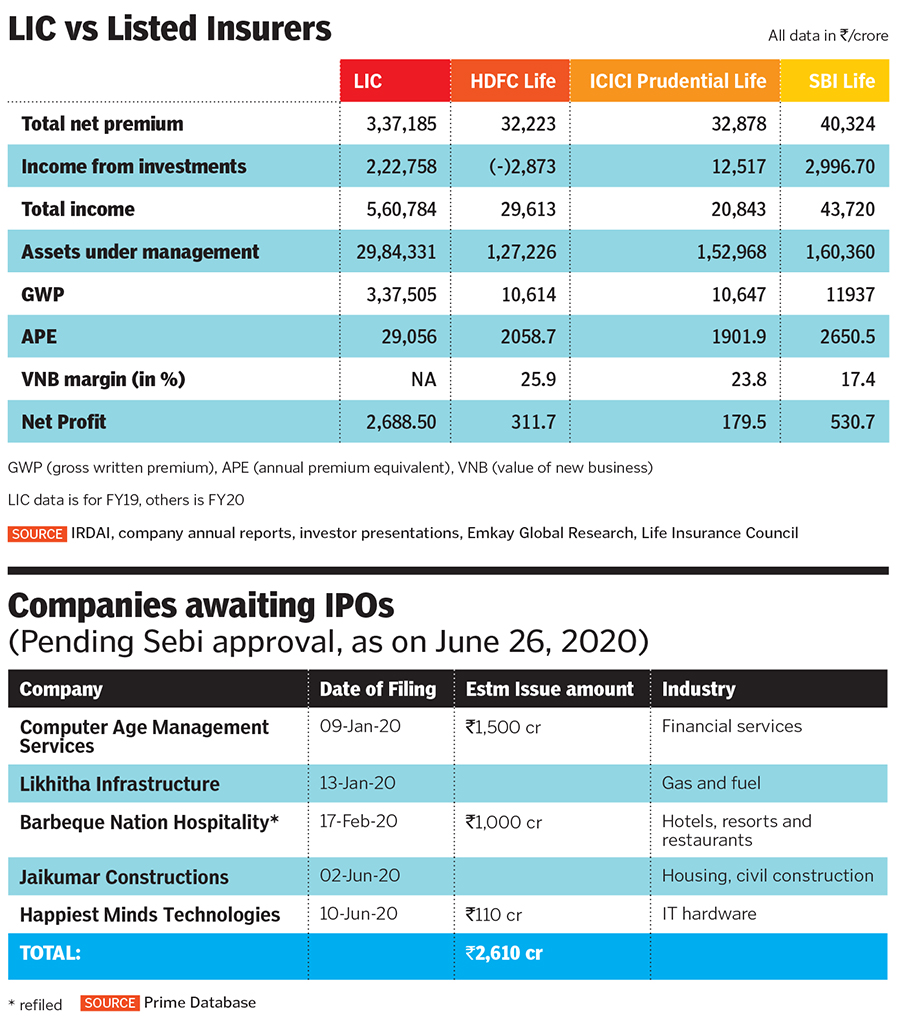 Troubles ahead
A listing at the markets will not just mean an obvious increase in transparency, but also the reporting of quarterly performance, and greater accountability to a new set of shareholders. LIC, by its very existence and massive AUM, has always been considered the buyer of last resort by the government to bail out companies or issues. LIC’s non-performing assets (NPAs) as of FY19 were ₹24,777 crore out of a total debt of ₹4.02 lakh crore, as per its 2019 annual report. The debate over privatisation has raised an ugly head again with LIC staff fearing that the stake sale will lead to privatisation. The institution will need to address this. LIC is now the owner of troubled bank IDBI, adding to a long list of disinvestments that include Hindustan Aeronautics Ltd, General Insurance Company, New India Assurance and Indian Oil Corporation in 2017 and 2018. It has also bought stakes in various troubled organisations such as NTPC and Bhel. LIC has not disclosed their rationale or the mark to market impact to its books. But once listed it might be difficult for the new entity to keep trying to bail out troubled lenders. Rastogi of Kuvera, however, suggests that not much would change. “The government will continue to have a disproportionate say in policy for LIC, as long as its governance is not affected. The government has no option but to continue to use LIC as a lender of last resort,” he says. Primary markets veteran Pranav Haldea, who heads Prime Database, agrees. “Even after the IPO happens, the institution will not see any change in effective control and in its management style in the coming years. However, listing will surely bring in greater transparency and better governance.” Even while no timeline has been set for the IPO, investment bankers will call for a listing in a bull market. Stocks have risen in the so-called Covid-19 quarter (April to June) driven by liquidity, and not earnings prospects. Global markets could also remain volatile closer to the US presidential elections in November.  While volatility in India has fallen off—27.85 levels on July 9 compared to 73 levels when coronavirus struck in March—there is no clarity on market trends over the next six to eight months. “By the time LIC lists, we need to see the opening up of the primary capital market. Some well managed companies should have tested the IPO market by then. That will make institutional investors more comfortable,” says Donald D’Souza, managing director and co-head, investment banking at Equirus Capital. Rights issues from some of India’s largest corporates have been fairly successful but there has been an absence of mid-size or large offerings to the primary markets. All this will mean that the government will need to act swiftly in order to get the listing done in 2021. In a year where tax collections are looking uncertain due to dipping revenue from the Goods and Services Tax, the government has much to gain if it can push through the LIC stake sale quickly. Trying to time it right will mean more delays. India surely cannot afford another listing debacle such as Air India.

Tweets by @forbes_india
Introspecting on the Role of Technology in the New Normal
Facebook-BCG report indicates the share of digitally influenced urban consumers for non-food CPG rise by 1.3x