As Bharti Airtel, Vodafone Idea, Reliance Jio are feeling the heat of a crisis precipitated by a Supreme Court ruling, the sector's problems run deeper 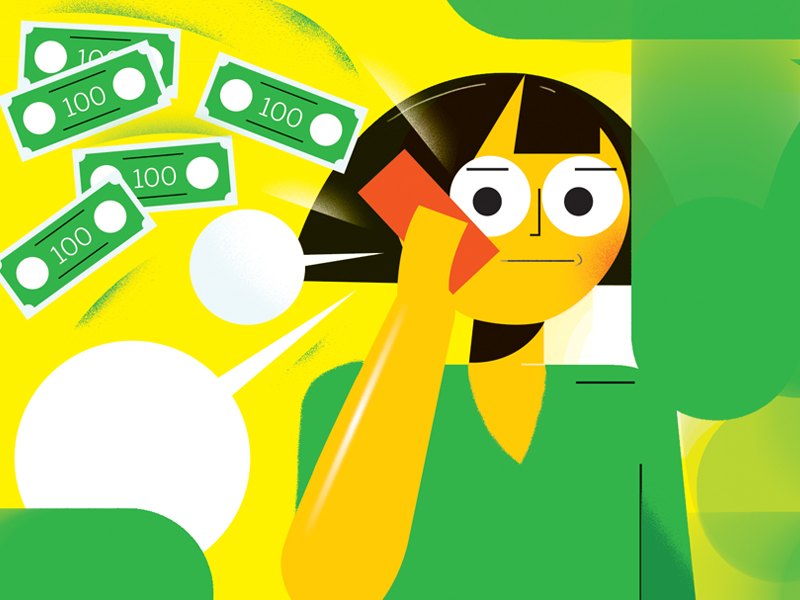 High taxes, low tariffs, and a penalty levied by the Supreme Court (SC) have created the perfect storm for India’s telecom companies. As Bharti Airtel, Vodafone Idea, Reliance Jio (Reliance Industries is the owner of Network 18, the publisher of Forbes India) look for government forbearance in dealing with the ₹75,000 crore in penalties levied by the SC, based on its interpretation of the definition of annual gross revenues (AGR), there are indications that a one-time relief is unlikely to lead to a smoother ride ahead. The next year could see further stress on their balance sheets. Vodafone Idea and Bharti Airtel are staring at an AGR liability of ₹25,000- ₹55,000 crore (the difference is on account of the companies’ calculation and the Department of Telecom’s calculation). While they’ve deposited a part of the levy, both firms have indicated they need more time.

It is unclear if the government, grappling with a shortfall in tax revenues, is willing to grant extra time and if it will waive the interest due. “The way the SC has given its judgment, there is a bleak chance of the government deviating from the approach the courts have taken. The probability of Vodafone-Idea shutting shop is still very high,” says Sanjay Kapoor, an entrepreneur and former CEO (India and South Asia) of Bharti Airtel. Kapoor points to the chaos of shifting Vodafone Idea’s subscribers to Bharti Airtel and Jio overnight. Jio with its 4G-only network would have to subsidise new devices to get those customers and it is unclear if Airtel would want to expand its 2G and 3G networks instead of the 4G networks it has been investing in for 18 months. The ₹60,000 crore that Vodafone Idea owes banks could also turn into bad loans, and infrastructure costs for the sector would rise. 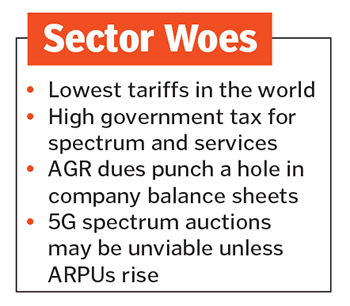 The implementation of 5G is likely to be another pain point. Given past auctions, spectrum costs for the 100 MHz 5G spectrum are unlikely to be below ₹50,000 crore per provider and laying down the network would prove to be expensive as 5G networks require low latency and more indoor sites. To carry data at high speeds, there would be more fibre optics cables needed, further increasing costs. It is for this reason that no provider has so far shown any interest in bidding for 5G spectrum. Airtel and Jio have asked the government to cut the spectrum price. “It is not clear whether Jio’s customer base is prepared for 5G. Airtel and Vodafone have more high-paying customers. If the customer base is largely budget customers, then they might not be willing to pay,” says Mahesh Uppal of Com First (India), a consultancy.  Lastly, there’s the Holy Grail of tariffs. Little product differentiation and price sensitive users have meant that customers almost always prefer the cheapest provider. As a result, Bharti Airtel and Vodafone Idea had to drop tariffs in response to Jio’s moves from 2017 onwards. At between ₹109 and ₹135, average revenue per user (ARPU) for telecom firms in India is the lowest in the world. The government taxes 30 paisa of every rupee earned, leaving little to reinvest in the business. 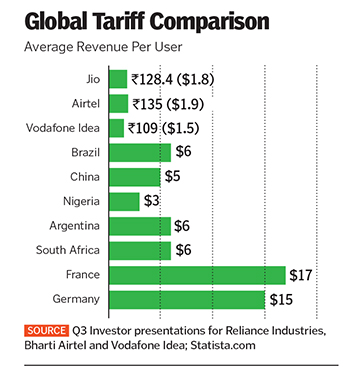 A tariff hike in December 2019 brought hope of some rationality in pricing, but whether customers are willing to pay much more for data remains to be seen. Sunil Mittal, chairman of Bharti Airtel, has publicly said ARPUs need to rise to at least ₹300 for the sector to be viable, but no provider has so far raised tariffs. As Vodafone Idea and Bharti Airtel wait for the AGR issue to be resolved, there is hope that the crisis will lead to better regulatory frameworks. “We need to have a careful no-holds-barred look at the regulatory regime,” says Uppal. The last serious crisis lead to the formulation of the New Telecom Policy, 1999. As things stand, Indian telcos would be unable to find the money to provide the services customers need.