There is a bit of Sakshi Chopra in the fight and might of most new-age consumer brands. Despite being an 'outsider' in the VC universe, she never gives up 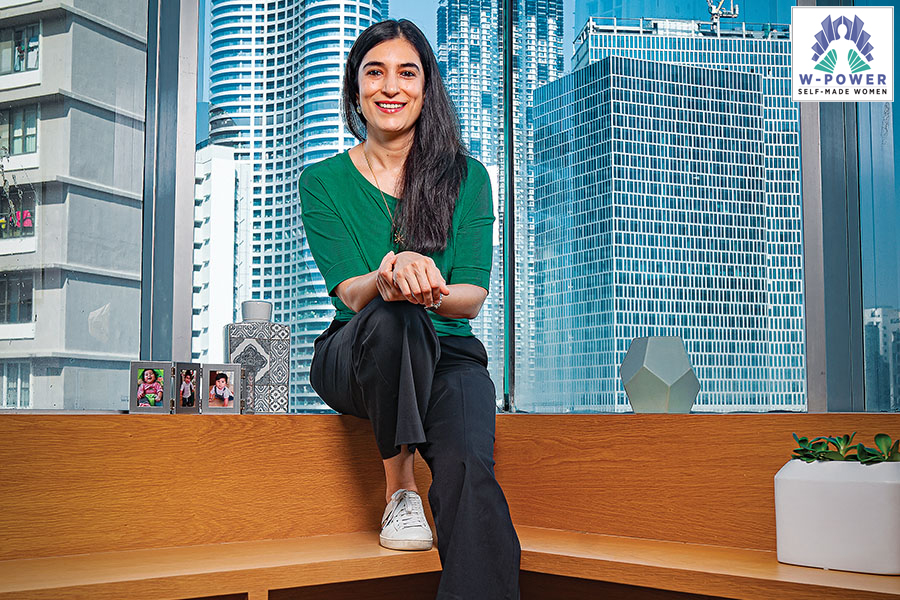 Early 2013, Gurugram. It all started with a missed call. “Some Sakshi Chopra from Sequoia wanted to meet you guys,” the receptionist passed on the message to Neeraj Kakkar. The co-founder of Hector Beverages had stepped out for a market visit to take stock of functional drink brand Tzinga, which was pitted against the Goliath Red Bull. Hector, during the same time, rolled out ethnic beverage brand Paper Boat, and opened up another front against the MNC biggies such as PepsiCo and Coca-Cola. “Soon Sakshi came with VT (Bharadwaj) and we had a great meeting,” recounts Kakkar, who back then aspired to make Tzinga the biggest player in the market. Though the first product from the stables of Hector fizzled out—protein-water drink Frissia—without getting noticed, Kakkar was waging a spirited fight with Tzinga, and was now getting ready to up the ante with Paper Boat. “You need somebody to believe in the underdog story,” he underlines. “Sakshi was the one, and she had two superpowers,” he adds.

Back in 2011, Chopra was unaware of her superpowers. Coming from a family of bankers and having had a stint with Deutsche Bank for five years in Germany, Chopra joined Sequoia India in 2010 as part of the analyst programme. “In banking, there were quite a few women. I was not the lone ranger,” smiles Chopra, who inadvertently made hustle an integral part of her DNA during her childhood. “When I was growing up, my family moved to a new city every two or three years,” she recalls, alluding to the frequent transfer of her father who worked with a government bank. “My sister and I were constantly being thrown into the deep end,” she adds. Adjusting to a new city, a new home, a new school, and building new friendships became the norm. “I was often the outsider who fought hard to fit in,” she underlines.

Chopra came back to India in 2007. Five years later, in 2011, the young woman was still an ‘outsider’. She was tracking a FMCG company which didn’t have any equity investment so far. The young investor spotted an opportunity to get into the company which was the leader in the segment. Chopra did her homework, worked extensively on the background of the company, made a detailed analysis and sought a meeting with the promoter. The beginning was bumpy. “He wanted to know why I was worthy of having his 20 minutes,” she recalls. For an investor looking for potential investing opportunities, the next question stumped Chopra. “We have enough money. We can invest in your fund,” was how the promoter reacted. 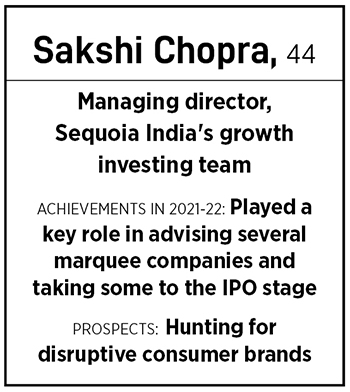 Chopra, though, persisted. “Ours is a very humbling business. We never allow our ego to get ahead of us,” she adds. The VC tried hard to explain the virtues of having a venture partner and managed to get a few more meetings. There was a small problem, though. “The guy would never talk to me,” she recounts. “Is there someone else in your team who you can come with for the next set of meetings?” he asked. The young investor obliged.

The founder, however, continued with his nauseating behaviour. “It was very hard to interject myself in the conversation,” recalls Chopra. The promoter would never look at her, and would continuously engage with her male colleague. “It puts you in a very awkward situation,” she reckons, adding that for a newbie who was also junior in ranks the experience was quite demoralising. Her colleague, though, did his best to make her at ease. “He would keep pushing me into the conversation,” she adds.

For an ‘outsider’, there was something else that made the job challenging. Though her mentors and colleagues at Sequoia were warm and supportive, they weren't that many people from banking in the VC world. When you start to build a network of relationships in the professional community, explains Chopra, you always go to either batch mates or someone who comes from the same background. “Back in the day, most of the hires in VC came from consulting,” she says. “There were not many common threads that I could pick up and just start a conversation,” she adds.

Cut to Pune. Hemant Jalan has loved every bit of conversation that he has had with Chopra since 2014. “She has been very supportive, reasonable, nice to talk to and bounce off ideas,” contends Jalan, who founded Indigo Paints in 2000, and was scripting an underdog story by taking on the big boys Asian Paints, Berger and Nerolac. “Sequoia invested in 2014,” he says, adding that Chopra was involved from the first meeting along with her colleagues Abhay Pande and VT Bhardwaj. When the latter left the fund, Chopra started to represent Sequoia on the board of the paints company, in which Sequoia reportedly made an investment of around Rs 170 crore between 2014 and 2016, and picked up around 38 percent stake. “I never thought of her as a woman investor,” says Jalan, who took his company public in a blockbuster listing in 2021. “It would be unfair to look at her from a gender point of view,” he adds. “She is what she is because of her talent and what she has done,” he adds.GV Ravishankar agrees. The managing director at Sequoia India shares an incident giving us a glimpse into Chopra’s personality. In a recent team dinner, Ravishankar was talking about team members and Chopra’s name popped up in the conversation. Four years back, Chopra was about to deliver her baby. “She was in labour and was being wheeled into the hospital,” he recalls. The would-be-mom stayed composed, and started making calls to her team to update them about ongoing deals and her portfolio. “People later realised that she delivered a baby afterwards. No one knew about it while speaking with her,” he says. “That's Sakshi for you...laser-focussed and unruffled,” he reckons, adding she has been a role model for men and women alike. “She's an amazing colleague and a leader,” he adds.

Back in Bengaluru, Paper Boat’s Kakkar outlines Chopra’s twin superpowers. First, she is “insanely empathetic”. “She understands what other people are going through and can deeply connect with them,” says the entrepreneur who has had a fair share of ups and downs in his journey. Energy drink Tzinga lost its sting and had to be taken out of the market in 2016-17. Paper Boat too had its more than fair share of low moments—funding scare, expansion blues, acquisition rumours. What, though, stayed constant was an unflinching support of Chopra. “She is almost like a co-founder who helped build Paper Boat,” he says.In a ‘thank you note’ penned early this year, Kakkar poured his heart out. Titled ‘The late late nights’, the letter lavishly praised Chopra and expressed gratitude for all her support. “Thank you for the early morning flights; Thank you for the 1:14:23 + phone calls; Thank you for the email from the Swiss Alps; Thanks you (and sorry) for the calls from the maternity ward…Thank you for your guts, gumption, passion and perfection…Paper Boat is because of you, Sakshi,” it read. Kakkar now shares the second superpower of her investor. “For her, the interest of the portfolio company comes first,” he says. As an investor, he adds, she will never leave you in lurch.

Chopra, for her part, picks up two traits that have helped her in life. “Patience and perseverance,” she underlines. Both the qualities, she maintains, does a world of good in surviving and flourishing in the venture world. Good founders, she reckons, are spoilt for choices as the investing world chases them. There are times when founders don’t respond, but Chopra sees an opportunity in such situations. “I never give up. I keep knocking at their doors,” she adds.

Her biggest strength, though, is the realisation of her existence. In an Ikigai workshop which she attended a few years back, Chopra was asked to figure out her purpose in life. The question was interesting. Is there an intersection between what you love to do, what you're good at, what you get paid to do, and what the world needs you to do? “Frankly, my work was sitting beautifully at this intersection,” she says. Though a career in investing is demanding for all, irrespective of gender, Chopra concedes that there are additional pulls for a woman. “As you get senior, it gets harder. It gets more demanding,” she says, trying to explain why it becomes hard to spot many women at the senior level in the VC world. She is confident, though, the scene would change over the next few years.

Does she have any suggestion or success mantra for young women trying to make a mark in the VC and entrepreneurial world? Chopra shares a golden nugget. “I never took myself too seriously,” she laughs. “Stay humble, stay resilient and just keep at it.”​

Tweets by @forbesindia
Careers and chance: How much control do you really have?
Smita Deorah: Innovating pedagogy for inclusion at LEAD School