Xstok founders Sanjiv Khandelwal and Mihir Shah have created an online B2B marketplace for textile mills to auction their excess stock. But they have the deeply traditional roots of the industry to contend with 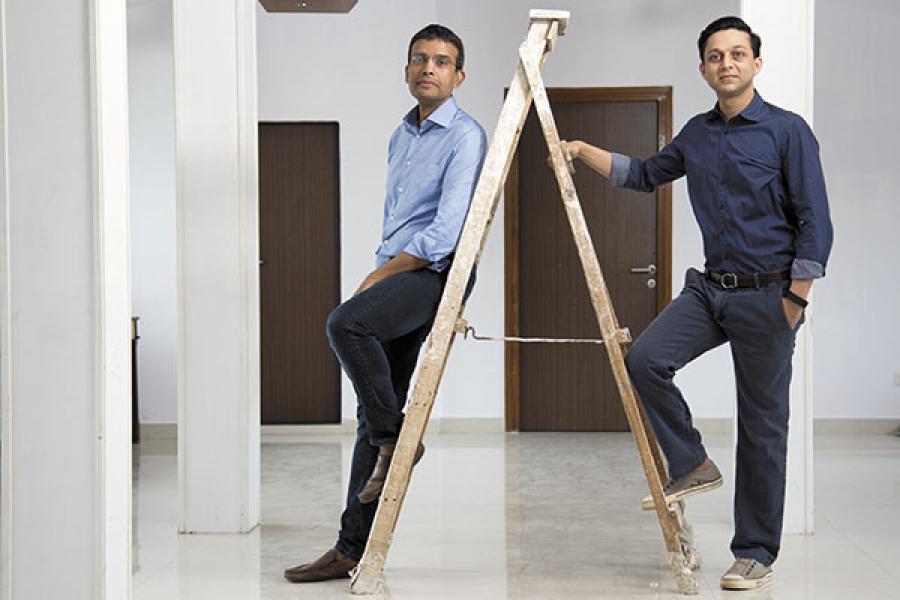 It’s a familiar scene. Buyers crowd a room that serves as a marketplace. They shout out their bids, jostling with each other for floor space. The sale and purchase of textile stock in India is a spectacle, at least in popular perception. We have the movies to thank for that.

But the textile market also has a quieter, more discreet side to it: The sale of surplus stock, from apparels to unused yarn.

In an industry that accounts for 2 percent of India’s GDP and 13 percent of its export earnings (according to the ministry of textiles), the surplus, or extra stock, is in itself a huge market. “But it’s very basic; completely in the unorganised segment,” says Prashant Agarwal, joint MD of management consulting firm Wazir Advisors. Sellers, typically textile companies or mills, maintain relationships with a few buyers, and prices are determined in a relatively arbitrary manner, he says.

The founders of Mumbai-based Xstok are out to change that. “India produces $11 billion [around Rs 74,000 crore] worth of textile surplus annually. And that market works in a traditional, opaque way,” explains Xstok’s co-founder Sanjiv Khandelwal, sitting in his company’s South Mumbai office that resembles a loft, in blue jeans and an orange shirt with his company’s logo emblazoned on it.

The platform that Khandelwal and co-founder Mihir Shah have built is the first of its kind to allow textile manufacturers with surplus stock to sell it through regular auctions or direct sales with dynamic pricing. It’s a straightforward proposition, but given the industry’s deeply traditional roots, the challenge is significant.

“While relationships are the strength behind partnerships, in a B2B [business-to-business] context, they can slow down growth,” says Khandelwal, 52, a serial creator of online marketplaces. Way back in 1999, he built polyesteronline.com. It didn’t last and, in hindsight, he admits, that may have been too early for India.

While he was involved in a number of ventures thereafter, the most recent ones brought him back to the auction and marketplace model. “One of the last was a diamond marketplace called polygon.net. It was a B2B marketplace connecting manufacturers and suppliers,” he says. This was followed by the creation of an online auction platform to sell office spaces in Mumbai’s Bharat Diamond Bourse. “From diamonds, the thought of going beyond auctioneering and into dynamic pricing came in.”

Xstok’s story began with a call from “one of the country’s largest textile companies” in 2014—he won’t say which—asking Khandelwal if he would be willing to create an auction platform to sell surplus stock. It was just an idea at that point, but  was validated by everyone he and Shah spoke to. While the sellers were enthusiastic, “there was some hesitance from the buyers because of the technology component”, says the 40-year-old Shah, who was previously an investment banker at Bank of America Merrill Lynch in the US.

Not any more. The buyers have begun to trust the platform, which is easing them onto the online marketplace. Xstok’s multi-step purchasing process, for instance, enables buyers to receive samples for physical examination.

While the company does not have any significant competition in the space at present, it does have a daunting challenger. “The challenge is the status quo,” says Anish Jhaveri, founder of Oliphans Capital, an early stage investment firm that participated in Xstok’s reported $450,000 angel investment round. “The only technology the textile sector has used is in manufacturing.” (Xstok’s other investors include Manish Choksi, president, home improvement, international and IT at Asian Paints, People Group founder Anupam Mittal, Jeetu Panjabi, formerly of Capital Group, and Vineet Suchanti, MD, Keynote Capitals.)

The inertia against change stems from the value that intermediaries command from interpersonal relationships and insider tips. “There are a lot of arrangements between manufacturers and buyers and they’re comfortable with that,” says Agarwal of Wazir Advisors. There’s a regular routine, where, every month, suppliers call selected buyers, and “have an open tender-cum-understanding process”.  Simply put, it’s about who you know and what they tell you. Besides, surplus isn’t the first order of business. “The most important thing is to sell the stock,” Agarwal points out.

Khandelwal is more measured in describing the disruption. He insists that Xstok has only optimised a process that has existed for generations. “We’re not here for disintermediation. We’re here to make sure that all the parties involved provide a just and fair margin.”

In the real world too, people talk to each other about various factors that influence the price of surplus textiles, Khandelwal says. “How does the market look? What’s new? What’s PM Modi doing? The import duty’s being changed, etc.” The idea at the heart of Xstok is to take into account all these factors to fix the price of the surplus, using the same concept that determines the price of your airline ticket: Dynamic pricing.

For its part, Xstok generates revenues through an annual fee that sellers pay to be on the platform. It also charges them a small share of the transaction amount. The company declined to share its revenue figures.

It is still early days, of course. The firm turned a year old this June. In that time, it completed 500 auctions, got 9,000 registered buyers and claims to have forged exclusive relationships with some of India’s largest textile companies, including Oswal Denim, D’Decor Home Fabrics and Arvind Mills.

“Today, most brands are moving to smaller production runs [of fabrics], leading to more surplus. Unless companies are able to sell that at a good price, overall profitability of the business takes a hit,” says Puneet Jain, CEO, Arvind Fashion Brands.

“Just getting the right buyers to connect with the right sellers at the right time is going to add significant value to this space,” says People Group’s Mittal. “Execution’s going to be critical here.”