Xiaomi is living its wildest dream

In five years, Xiaomi has become India's no 1 smartphone company and morphed into a 'smart' consumer electronics and durables maker 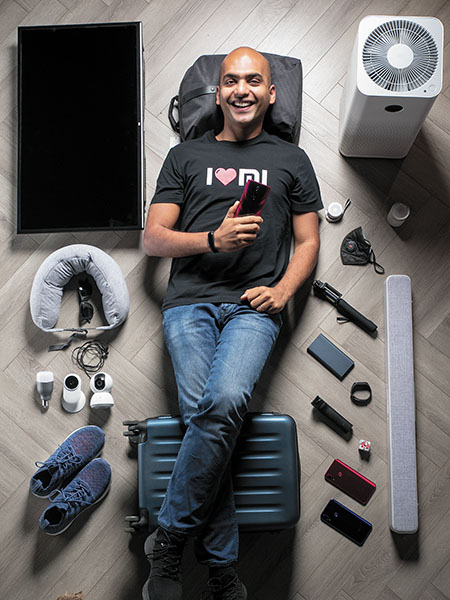 It’s The Frabjous Day, the day when Alice is slated to slay Jabberwock, a fictional creature in Lewis Carroll’s 1871 classic Through the Looking-Glass, and What Alice Found There, the sequel to Alice’s Adventures in Wonderland. Alice, though, gets nervous when she realises how enormously intimidating Jabberwock is. “This is impossible,” she mutters. Mad Hatter, who is standing next to Alice, tries to boost her confidence: “Only if you believe it is.”

Egged on by Mad Hatter, Alice recalls six impossible things that she used to believe could be done before breakfast. “Six impossible things. Count them, Alice,” Mad Hatter implores. Alice starts saying them aloud. One, there’s a potion that can make one shrink. Two, a cake that can make one grow. Three, animals can talk. Cats can disappear. There’s a place called Wonderland. And six, I can slay Jabberwock. Alice eventually ends up killing the creature.

In Bengaluru in July 2014, in a cramped one-room office that barely had space for a few chairs, a jittery Manu Jain was counting his list of ‘six impossible things’. The first, and most urgent, was a fervent wish that at least 10,000 people would go online to buy a Xiaomi smartphone on Flipkart.

Second, India offered hope, and space, for yet another smartphone brand. Third, on online-only player can succeed among offline competitors. Fourth, Xiaomi can one day become the biggest brand. Fifth, Xiaomi can morph into a brand that is much more than a smartphone. And six, Wonderland does exist.

Five years down the line, the global vice president of Xiaomi, and managing director of Xiaomi India, is living his wildest dream. Xiaomi has sold over 100 million smartphones in India since it its debut in July 2014. Jain pinches himself on his wrist. “It’s almost like Alice in Wonderland,” he grins. When Alice started her journey, he lets on, she didn’t know how Wonderland would be. “We too didn’t know what was in store for us.”

In five years, Xiaomi has not only become the biggest smartphone brand in India, ahead of  South Korean tech giant Samsung, but it has also taken pole position in three more product categories that it almost single-handedly created: Smart TVs, smart wearables and power banks.

In revenues too, it has leapfrogged. While it closed FY17 at ₹8,380 crore, the numbers for the next fiscal jumped to ₹23,060 crore, with a profit of ₹293 crore. Xiaomi India declined to share the financial details.

From selling smartphones to having a sizeable presence in over 12 segments as diverse as routers, smart air purifiers, shoes, lifestyle products like backpacks, luggage, T-shirts, audio products and trimmers, Xiaomi has morphed into a ‘smart’ electronics consumer durable maker. The promise is of much more. “This is just the beginning of a brand new chapter. We will continue to bring in more categories and products,” contends Jain, who has now entered into water purifiers as well (see interview).

FRABJOUS DAY
July 22, 2014. Xiaomi had flagged off its maiden flash sale on Flipkart. Jain was hoping against hope. A brand few would have heard of in India, a company that didn’t spend a marketing dollar in announcing its debut, and a smartphone brand that was going against the grain by selling only online was doing something unthinkable: Putting 10,000 units of Mi3 on sale. “We thought that people who followed us on Facebook would come and buy the phone,” recalls Jain, who had a torrid time before the sale, as sceptics voiced their doubts about the online-only gambit.

Within seconds of the flash sale going live, Flipkart crashed. Over half a million people went online to buy Xiaomi handsets. Mi, which stands for ‘Mobile Internet’ but also means ‘Mission Impossible’, started its India innings with a bang. Jain had slayed his ‘Jabberwock’. Mission Possible had begun.

In the third quarter (July-September) of the same year, Xiaomi sold over a lakh smartphones. By the end of the year, it had launched power banks and emerged as the fifth largest smartphone maker in India. In the same quarter the following year, Xiaomi sold 1 million handsets. A year later, the number doubled to 2 million. And by 2017’s last quarter, the Chinese upstart had dethroned Samsung to become top dog. It’s held on to that position ever since.

The Xiaomi juggernaut is in no mood to pause, what with the enormous headroom to expand in India. “We are greedy for growth, not profit,” says Jain, underlining the fundamental business philosophy of the world’s fourth biggest smartphone maker which it incorporated in its initial public offering (IPO) prospectus last June. The overall hardware net profit margin, the draft prospectus noted, will never exceed 5 percent.

In an open letter, along with the IPO documents, Lei Jun, chairman and founder, pointed out the positioning of the company. Xiaomi, he underscored, is an internet company with smartphones and smart hardware connected by an IoT (internet of things) platform at its core. In January 2019, in his annual conference speech, Jun unveiled the dual engine strategy of Xiaomi: Mobile +AIoT. “This is the core strategy of Xiaomi in the next five years,” he said (see interview).

Back in India, Jain decodes the game plan of the smartphone maker. “We always wanted to become a full IoT player, and not just a smartphone company.” The smartphone, he explains, is just one of the key milestones in the IoT journey. It’s the centre of the universe for all the other IoT devices, he points out. 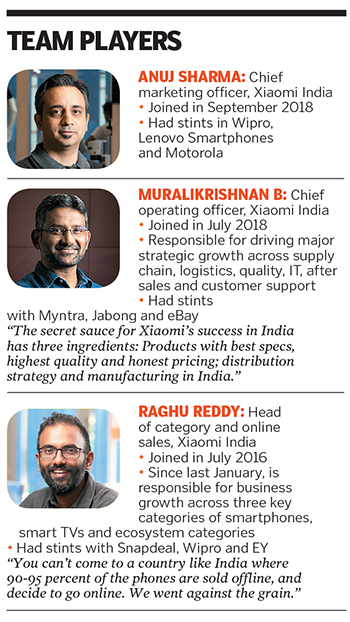 THREE BUCKETS THEORY
The seed for entering into multiple categories in India was sown in the first quarter of 2017. The topic came up for discussion in a meeting with Jun and board members. With Xiaomi looking sorted on the smartphone front, the question was: What next? From the brainstorming session emerged the contours of three big categories that Xiaomi could look into.

The first bucket is big in market opportunity: Consumer electronics and durables, including televisions (TVs), fridges, washing machines, air conditioners (ACs), water purifiers and laptops. “All these are big revenue generators,” says Jain. “But there is also a lot of competition. So we have to do something disruptive,” he says, adding that the war can’t be won in each category unless the company does something distinctive. It did that by launching smart TVs last February.

Within a quarter (April-June), Xiaomi became the biggest smart TV brand in India. In fact, it ended up selling a staggering 2 million units in just 14 months since the launch. While older players like Samsung, LG and Sony were focusing on traditional TVs and priced their high-end TVs prohibitively, Xiaomi loaded its TV and sold at half the price.

The idea of launching TVs, ahead of, say fridges or ACs, was logical: TVs mirrored smartphones. “Like a TV, a phone is a medium to watch and consume content,” explains Jain. TVs, most importantly, also fitted slightly better in Xiaomi’s IoT scheme of things. “You can do a lot of smart things on TV that you can’t with ACs and other durables.”

The second bucket that Xiaomi identified was small in business terms but growing rapidly. This included fitness bands, robot vacuum cleaners and air purifiers. The idea was simple: To own the category and develop it. “Today we own the wearable space in India with more than 40 percent market share,” beams Jain. The category, he points out, has grown almost 20 times in the last two years.

The third bucket has less to do with business and is more for the community of users built around the Mi brand—to keep them engaged and connected. “These are cool projects that we keep doing from time to time,” says Jain, referring to shoes, luggage and T-shirts. 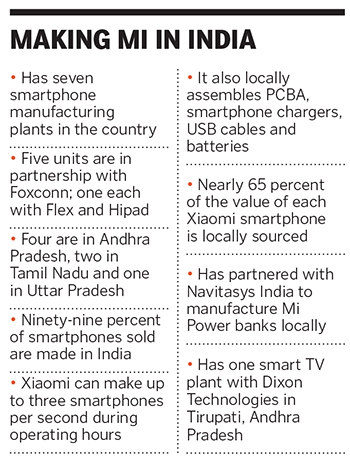 SMART BY SMARTEST
Xiaomi, reckon handset experts, was smart enough to realise that smartphones alone can’t keep it at the No 1 position. “The smartphone has become a fickle play. It has been commoditised,” avers Navkendar Singh, research director (Devices and Ecosystem), at IDC India & South Asia. Xiaomi’s transition to a smarter lifestyle brand is based on the understanding that it has to reach out to its users and stay connected with them through different products. Smartphones, Singh reckons, are the easiest way to enter into the minds of the consumers.

Branding experts applaud the marketing strategy deployed by the handset maker. It offered high quality products at lower rates, was the first to own a trend across categories, exhibited flexibility with distribution and supply, and always delivered more bang for the buck irrespective of the audience they engaged with, contends Abhik Choudhury, founder of Salt and Paper, a brand consultancy firm.

Xiaomi, he points out, yearns to be the Amazon of technology. Every six months it launches a new product connected to the internet. “It wants to be a leader in any category that can be accessed wirelessly,” he says. The opportunity to grow, he adds, is massive. As are potential challenges.

The biggest challenge is staying focussed. Though Xiaomi is no longer a one-man show—it has put together a professional team in two years—the big task is: Can it devote the same energy and focus to each category? Another challenge is the resurgence of Samsung and aggression of new players like Realme. In the second quarter this year, Realme became the second-largest player in the online segment with a 17 percent market share (it was just 4 percent in Q2 last year), according to Counterpoint Research. Xiaomi’s share during the corresponding period came down to 46 percent from 55 percent.

“ Xiaomi yearns to be the Amazon of technology. Every six months it launches a new product connected to the Internet.”
Abhik Choudhury, founder, Salt and Paper

Smartphones, reckon analysts, have to be Xiaomi’s mainstay. “Apple is Apple because of iPhones. The rest comes because of it, not apart from it,” says Ashita Aggarwal, marketing professor at SP Jain Institute of Management and Research.

Jain is aware of the threat. He knows the disruptor can get disrupted. “I think the biggest threat for us is more internal,” he concedes. The feeling of having arrived is the one that has the potential to do the most damage. “That’s the moment when probably we’ll start seeing a decline,” he says, recalling how the brand was billed ‘mad’ when it made its online-only debut.

Meanwhile, back in Alice’s Wonderland, Mad Hatter throws a question to Alice.

Alice answers in the affirmative, but ends the conversation with: “All the best people are.”

Tweets by @forbesindia
Podcast: How Xiaomi is taking 'smart' beyond the smartphone
'Xiaomi India has outdone our expectations': Lei Jun