The art of being the Rockefellers

David and Peggy Rockefeller's art and artefacts collection, which will go under the hammer in New York, reflects the life of America's first billionaire family 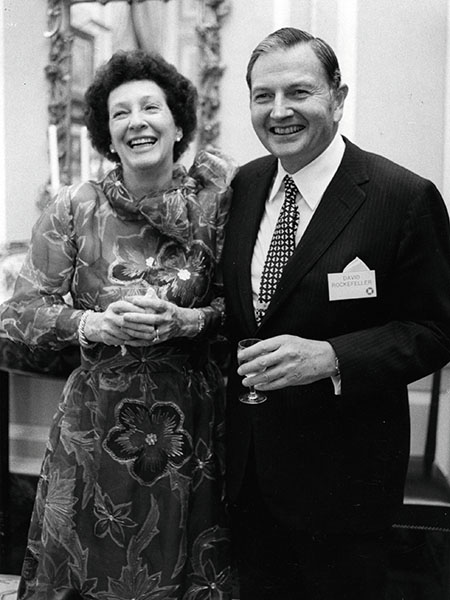 David and Margaret Rockefeller rarely disagreed about paintings—except for a Picasso
Images Courtesy: Christie’s
David Rockefeller took to collecting quite early in life—at the age of 7. But his objects of fancy then were neither Chinese porcelain nor tapestries, which fascinated his father John Jr, nor the paintings, ranging from Impressionist to modern, that his mother Abigail was a connoisseur of. Instead, David, the grandson of America’s first billionaire and Standard Oil founder John D Rockefeller, fell for the lowly beetle, the first of which he picked up on his family’s land near Tarrytown, New York. Over the course of his life, till about he was 100 (he died in March 2017 at the age of 101), the globetrotting chairman of the Chase Manhattan Corporation collected at least 2,000 species and 1.5 lakh specimens that were eventually donated to the Museum of Comparative Zoology at Harvard University, his alma mater.

David not only collected the bugs, he knew about most of them—their genus, and the species—through and through. On a trip to Morocco, remembers Peter Johnson, David’s amanuensis, he would, from atop camels, spot beetles in the sand dunes, collect them in a jar and bring them back to the US to be formally identified and added to his collection. 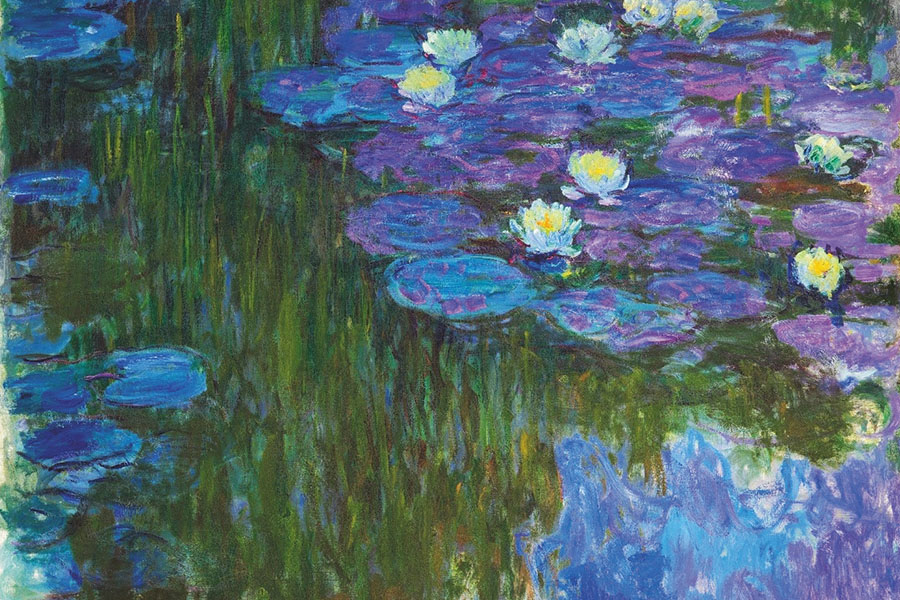 
In a way, his involvement with his beetles is reflective of a connect that he shared with all his other collectibles, a treasure trove of arts and antiques—from paintings to porcelain, silver, American arts, Asian art to a stable of vintage horse-drawn carriages—that he and his wife of 56 years Margaret “Peggy”, a conservationist and an accomplished pianist who sat on the board of the New York Philharmonic, had accumulated over their lifetime.

Over 2,200 lots of these are going to be auctioned by Christie’s in New York between May 8 and 10. Christie’s estimates the sales to surpass the $484-million mark of fashion designer Yves Saint Laurent and his partner Pierre Berge in 2009. The proceeds will go to 12 named charitable organisations, including Harvard, Museum of Modern Art (MoMA) in New York, and The Rockefeller University.

Like collecting, charity too runs in the family, right from John Sr, the wealthiest man of his time and arguably the wealthiest in history. He founded Standard Oil in 1870 and by 1900 went on to control over 90 percent of the refined oil in the US. While the Supreme Court ordered the dissolution of the company in 2011 for allegedly violating the Sherman Antitrust Act, the Rockefeller family still remains among the richest in the US, with around 200 members collectively worth $11 billion, according to Forbes’ list of wealthiest American families in 2016.

John and his son John Jr over their lifetimes gave away over $1 billion, and established institutions like the University of Chicago and The Rockefeller University.

While growing up, David knew well enough what it meant to be a Rockefeller. He was followed by a limousine as he roller-skated to school, and was chauffeured around in a sedan “tall enough to stand in”. But despite all the tropes of a rich life, he also gave away almost $1.34 billion to various institutions and causes. He was also at the forefront of the Giving Pledge, conceived by Bill Gates and Warren Buffett, which urged billionaires to give away at least half of their wealth to good causes. He hosted the inaugural dinner of signatories in May 2009 and pushed the pedal on getting billionaires to sign up; now, 150 are part of the programme.

David also donated $150 million to MoMA, one of the world’s most influential museums of modern and contemporary art that has also consistently been enriched by the collections of his family. In fact, the heart of the auction will be the paintings in his personal collection that ranged from Impressionists like Claude Monet and Paul Cezanne, post-Impressionists like Paul Signac and Georges Seurat, doyens of modern art Pablo Picasso and Henri Matisse to 20th century contemporary artists including Jasper Johns, Willem de Kooning and Robert Rauschenberg. Among the most famous ones were Water Lilies by Monet, painted between 1914 and 1917, Miró’s Murals triptych (1933), Seurat’s The Roadstead at Grandcamp and Matisse’s Odalisque couchée aux Magnolias (1923), which is expected to sell for at least $50 million.

The collection is perhaps ironic because David grew up imbibing some of his father’s scepticism towards modern art. John Jr was a great collector of porcelain, rugs and tapestries, and donated large sums to the post-war restoration of architectural icons (like the Palace of Versailles and the Reims Cathedral in France; he also founded The Cloisters museum in New York), but his interests in art bordered on religious. Left to himself, John Jr didn’t believe in buying art. If at all he did, a painting had to convey a story of good triumphing over evil, typical of Gothic and Renaissance work. 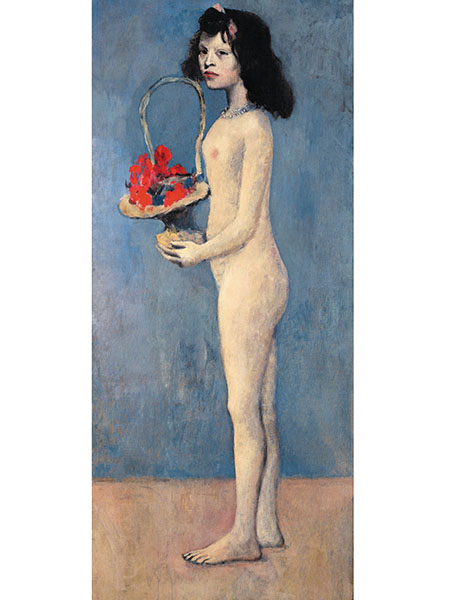 Picasso’s Fillette à la corbeille fleurie (1905)
But art inspired his wife Abigail, an incredibly forward-thinking woman who was also the co-founder of MoMA. Not just French Impressionism and modern art but also that of living artists, including traditional Japanese prints, Persian and Indian miniatures, sub-Saharan art and Australian art. In December 1930, Henri Matisse visited the Rockefellers and, during a dinner discussion, tried to convince John Jr of the virtues of modern art. He couldn’t, but John did concede that Matisse should not despair “because Mrs Rockefeller was so persuasive she might eventually wear him down to the consistency of jelly”.

At home, David grew up with these contrasting forces, and even when he was elected to the MoMA board of trustees in 1948 upon his mother’s death, he hadn’t entirely warmed up to modern art. It took Alfred Barr, the first director of MoMA, and a few acerbic comments from David’s wife Margaret, during a dinner, on the banality of their collection for him to rethink. “Her comments left their mark,” David had later said, “...we found ourselves more and more tempted by the French Impressionists and other French painters who anticipated the Impressionists, such as Boudin, Courbet, and Delacroix.” 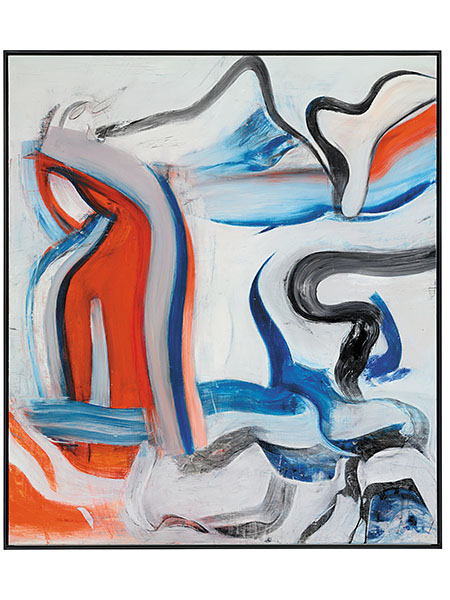 A Willem de Kooning untitled painting
With Barr’s guidance, David and Margaret began to make acquisitions like Cézanne’s Boy in a Red Vest and Manet’s The Brioche (1870), some of which he bought from the collection of Chester Beatty, the wife of American mining magnate A Chester Beatty. Between 1957 and 1963, his collection of modern art became even more ambitious with the buying of Monet’s Nymphéas en fleur (1914–17), Paul Signac’s Île la Comtesse(1888), Paul Gauguin’s La Vague (1888), Armand Séguin’s four-part art nouveau screen, The Delights of Life (1894), Giorgio Morandi’s Still Life (1940), Matisse’s Landscape at Collioure (1905) and a Cézanne watercolour of Mont Sainte-Victoire.

Perhaps Abigail’s unbridled enthusiasm for modern art also rubbed off on David in some way. Abigail was a huge admirer of Mexican artist Diego Rivera, the husband of artist Frida Kahlo and one of the most famous exponents of modern art. In 1931, as the co-founder and trustee of MoMA, Abigail invited Rivera for a solo exhibition at the museum, only the second artist after Matisse to get the invite. Rivera came with a painting, The Rivals, that Abigail had commissioned, and that he completed in his makeshift studio onboard SS Morro Castle, the steamship that brought him to New York from Mexico. In 1940, David and Margaret received the painting as a wedding gift from Abigail. 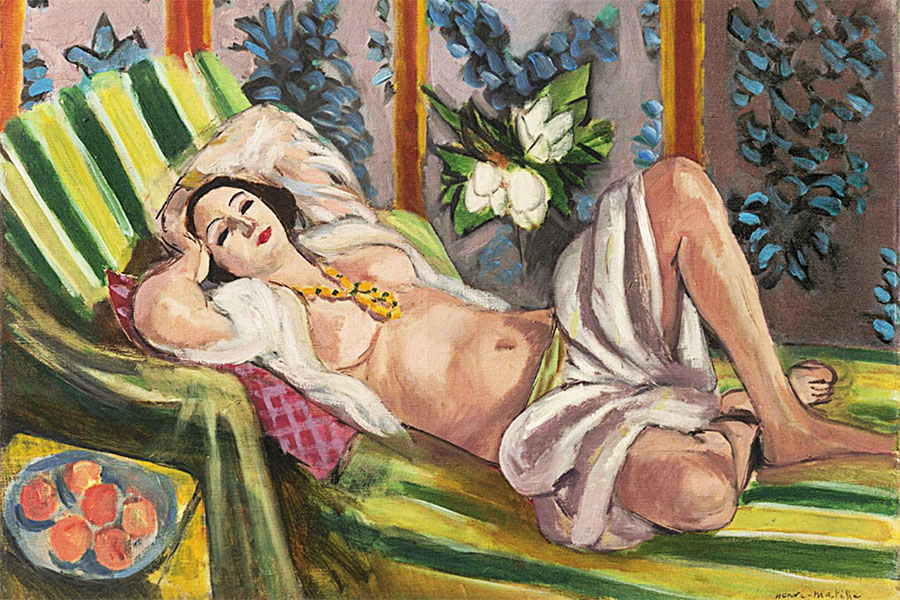 Henri Matisse’s Odalisque couchée aux Magnolias
Besides their impressive collection of Impressionist and modern art, David and Margaret also built a collection of American works, many of which were gifted by Abigail herself. These included not only the modern American artists she favoured—Edward Hopper, Georgia O’Keeffe and Arthur Davies—but also painters such as Gilbert Stuart, George Inness and John Singer Sargent.

There wasn’t much that David and Margaret disagreed on, particularly when it came to paintings. Except Picasso’s Woman and Dog Under A Tree (1962), which reminded Margaret of the artist’s alleged misogyny. “You know, I am just uncomfortable having it in the house,” she is known to have said, passing it off to their son David Jr, who kept it in his home for 40 years before giving it to MoMA.

However, it is another of Picasso’s works, Fillette à la corbeille fleurie (1905), the portrait of a nude flowerseller, which is expected to be the star of the auction, and estimated to go under the hammer for $100 million. The picture was part of American author Gertrude Stein’s collection, and was bought by a wealthy syndicate that included David and his brother Nelson. David and Margaret ended up owning eight more Picassos from the Stein collection, and two works by Juan Gris, of which The Musician’s Table will be auctioned as well.

Also to go on auction are the vast collection of porcelain, furniture and other global artefacts that the Rockefellers collected and lived with. Johnson says, “They didn’t just collect them and put them behind a glass case for people to admire. They put them on the table, ate with them.” As David himself had once said, “It is Peggy’s strong conviction, and I agree with her, that a home should not look like a museum.”