Cobots are the tools of the future: Pradeep David of Universal Robots

India has been slow in this sphere, but adopting a human-robot approach can be particularly helpful for the manufacturing sector, says David, general manager (south Asia) at the Danish robotics firm 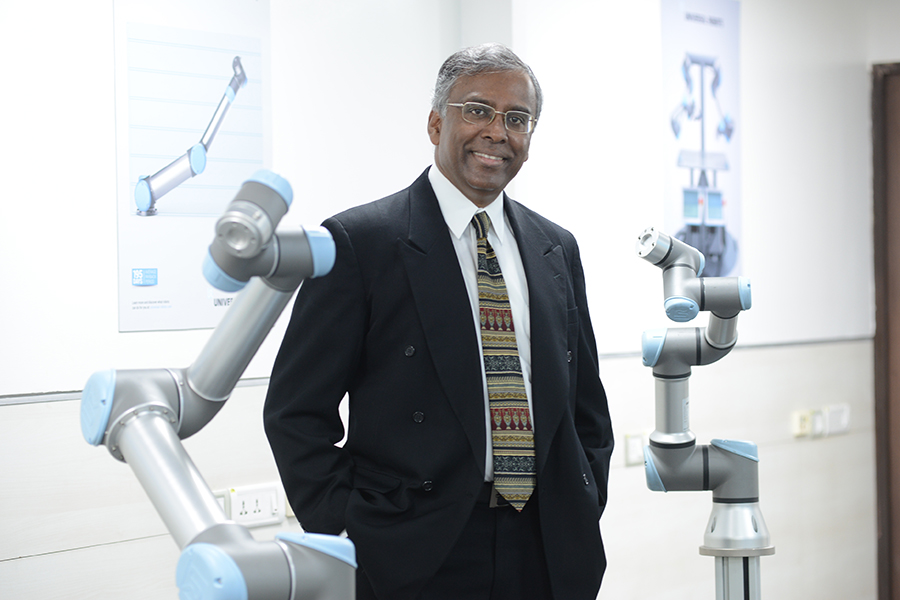 India, says Pradeep David, lags in robot adoption, with just three robots per 10,000 employees compared to a global average of 74. But for the Danish robot maker that started its India operations in 2016, the statistic doesn’t make the situation grim. “Though the installed base is small, the market potential remains large,” says David, general manager, (South Asia) at Universal Robots. Founded in 2005, Universal Robots is globally known for making ‘cobots’—collaborative robots that work with humans in manufacturing facilities. The approach of human-robot collaboration, David adds, can be particularly appealing to the Indian manufacturing industry, especially to Indian SMEs because of the labour-intensive conditions. “The Indian platform is slowing maturing and recognising the significance of cobots,” he said in an interview to Forbes India. “Bajaj Auto remains Universal Robots’ oldest and largest customer, with over 100 cobots deployed.” Edited excerpts:
The biggest fear of robots and resistance towards automation is the apprehension of jobs being lost. Have cobots managed to address this concern?
Worldwide, there’s a fear of jobs being displaced by robots, and India is no exception. While it cannot be denied that low-end jobs (such as picking and placing parts) are being eliminated, increased innovation in industries is not negatively impacting employment. The introduction of cobots almost always results in net job creation as human employees are redeployed to supervise the work of cobots and focus on more value-added strategic work. As businesses inevitably grow as a result of implementing cobots, more jobs are created in the enterprise. Cobots are tools of the future. They do much more than just repetitive tasks; they are like the acrobats or contortionists of robots—they can do anything, anywhere, in utmost safety (subject to application risk assessments) to their environment and the humans that work alongside it. The future lies in not displacing men but making them more powerful and skilled with the help of cobots. What’s your take on it?
I absolutely agree. Cobots are designed to work with humans and assist them with a variety of tasks to streamline repetitive and potentially unsafe processes, and direct their talent in critical thinking and increasing productivity and efficiency.  In fact, MIT showed in a study conducted at a BMW factory in 2015 that the human-robot collaboration will improve productivity by up to 85 percent. It optimises the productivity of the cobot and the employee, who work co-dependently, enhancing each other’s unique capabilities. For example, in the L’Oréal factory in Pune, where employees previously lifted up to 8,500 kg in a day, cobots removed the ‘Level 4’ ergonomics risk posed to staff completely. The skills of the human workforce can be put to better use for more strategic and creative contributions of greater value. This also further enables humans to climb up in the corporate chain as they enable up-skilling of labour.
Similarly, SME New Engineering Works in Jamshedpur has been using cobots for their small components’ division, leading to 40 percent increase in productivity. Workers find them to be as easy to use as a smartphone, easy to programme within a couple of hours, making them more valuable to the company. How have you been growing in India, and globally?
Universal Robots has grown exponentially over the past 10 years. It has globally deployed more than 34,000 cobots with 300 partners. In 2018, Universal Robots’ revenue hit $234 million. The operation in India, which commenced in 2016, has been growing rapidly. Two-wheeler major Bajaj Auto employed a cobot first in 2011 for material handling, decal application, assembly and some other processes.  They eliminated up to 85 percent downtime and productivity gains were significant. Now, the company has deployed more than 100 cobots on their operational grounds. Companies like Bajaj Auto, L’Oreal, Aurolab and even MSMEs are now encourage automation to grow in India, across industries. How receptive is the Indian market to cobots, as compared to developed countries?
Though India lags in robot adoption, the approach of the human-robot collaboration can be particularly appealing to the Indian manufacturing industry, and especially to the SMEs. The small footprint, low energy consumption and easy programming allows SMEs to have the flexibility of automating different production lines at different times for customised batch productions. Take, for instance, Aurolab in Madurai, an integral part of Aravind Eye Care Systems that employs and trains all kinds of individuals, including local female high school graduates. Women constitute 90 percent of the workforce in Aurolab, which has deployed cobots since 2012 to solve the issues of running late-night shifts, product variability, worker transition and the ergonomic challenges the staff faced.

Tweets by @forbes_india
Abhishek Bachchan's big bet
A commentator must never have an agenda: Sanjay Manjrekar