Basking in the afterglow of yet another IPL win for the Mumbai Indians, the vice captain of the Indian team sets himself up for a bigger challenge in the ICC World Cup 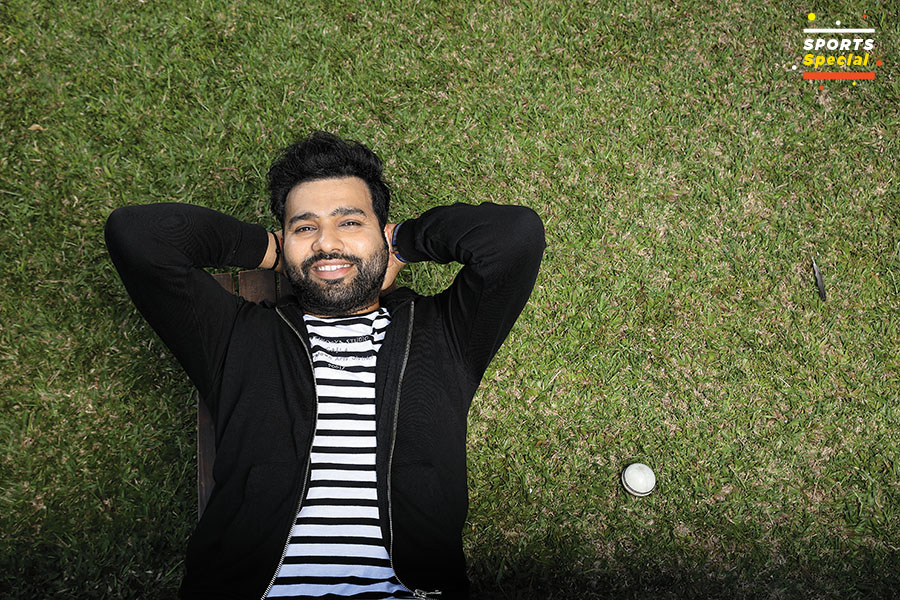 Rohit Sharma has made a habit of hitting sixes without the brute muscle power of an Andre Russell or a Chris Gayle
Image: Mexy Xavier


Scoring nine runs off six balls in any T20 tournament is not a Herculean task. In the Indian Premier League (IPL), especially, where bowlers are sent on a leather hunt, it is par for the course. That’s exactly what defending champion Chennai Super Kings (CSK) would have thought before the last over of the IPL final against Mumbai Indians (MI) in Hyderabad. Veteran Aussie Shane Watson, who had reserved his best for the big occasion, was at the crease. Skipper MS Dhoni was sitting in the team dugout, displaying no signs of nerves. On an exciting Sunday evening in May, the ‘yellow army’ was cheering lustily for CSK to lift the trophy for a record fourth time.

What happened, though, was not normal. MI captain Rohit Sharma handed the ball over to Sri Lankan pace genius Lasith Malinga, who was hammered for 20 runs in his third over and a dozen in his second. The commentators were stunned; MI fans at the stadium, with over 39,000 spectators, were aghast; and millions of TV viewers found the move absurd. Sharma, it seemed, had cracked under pressure.

The gambit paid off. Malinga conjured up a mesmerising over to redeem himself; MI pipped CSK by one run to win the IPL for a record fourth time. Sharma quietly, once again, demonstrated his mental toughness and astute leadership.

“Not taking stress,” he told Forbes India in Mumbai a few days before the start of the IPL, “comes naturally to me.” “It’s rare for me to panic,” reckoned Sharma, as he prepared for a photoshoot at Hotel Trident in March.

Drawing an analogy, Sharma said facing the camera is similar to facing a bowler. “It’s fun, it’s normal, and I would be myself,” he reassured the photographer. Celebrities are notorious for throwing tantrums, and being finicky about how they are captured. “I don’t think of myself as a celebrity,” Sharma smiles. There’s only one aspect, he explains, in which life has changed. “I am married now, I have a daughter, and I get to sleep only for five hours,” he laughs. “Everything else is the same. I still focus on doing my job.” 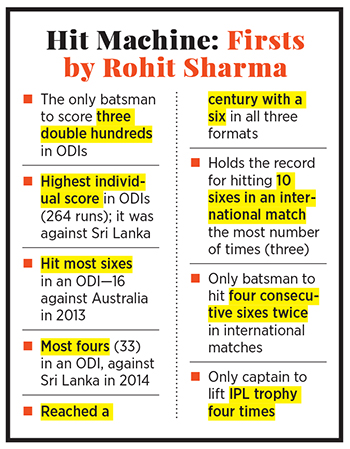 Back in Hyderabad, at the IPL final, the vice captain of the Indian cricket team went about doing his job without any fuss. “At that stage,” Sharma confessed at the post-match presentation, talking about what was on his mind before the start of the dramatic final over, “I wanted to back experience… someone who’s been in that situation before.” Malinga, he explained, has been in that situation a million times, bowling those last overs, defending five runs, ten runs, whatever it is. “So we backed him,” he says. The adulation for Sharma after the IPL final was, not surprisingly, as effusive as ever. MI captaincy, seasoned commentator Harsha Bhogle said after the match, has made a huge difference to Sharma as a person. “And the leader in him has delivered four trophies now. #TopCaptain,” Bhogle tweeted.

Sunil Gavaskar, too, complimented Sharma’s leadership. The IPL final, the legendary batsman said, was a contest between the two best captains of India. “Mumbai Indians have now won it four times under the leadership of Rohit Sharma making him the most successful captain in IPL history,” Gavaskar wrote in his newspaper column. Post IPL, cricket fans on social media went hysterical, demanding Sharma be made captain of India’s ODI and T20 teams.

In Mumbai, Sharma prefers to talk about his hunger for amassing runs and playing for the country. “The fact that I am one among a crore to play for the country is highly motivating and satisfying. I enjoy both the roles—vice captain of the Indian team and captain of MI.”

Being a trusted lieutenant, much like what the legendary Rahul Dravid was during most of his career as the vice captain, and letting his bat do the talking is what the unassuming cricketer enjoys the most. “I cherish responsibility,” he says. 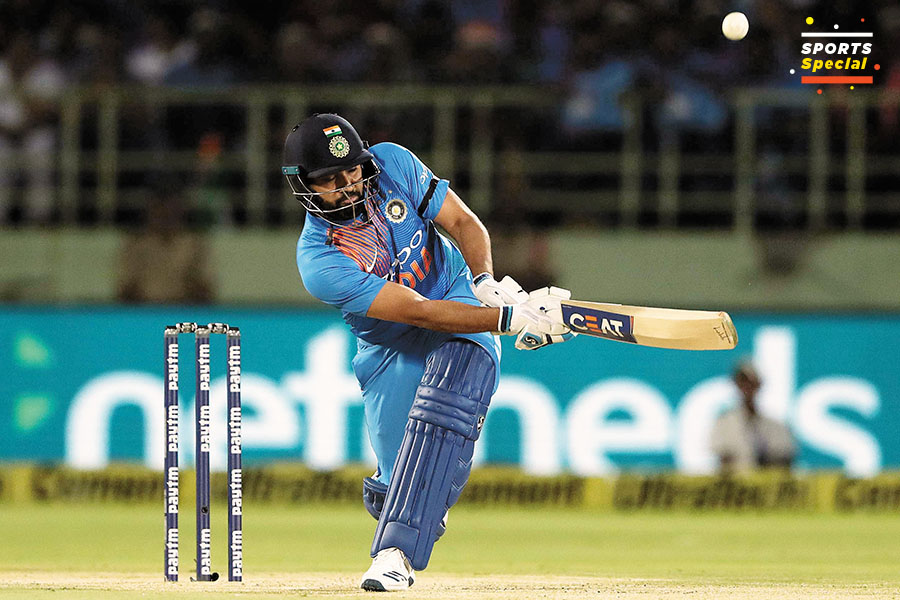 My first job, he adds, is to shine with the bat and then see how I can help the captain, coach and my teammates. “A vice captain’s job is to make sure that he supports the captain and the rest of his team,” says Sharma, who has earned the moniker of ‘Hitman’ because of his ability of hitting sixes with ease. Sample this: 218 maximums in ODIs, over a hundred sixes in international T20s, and a staggering 336 in all T20s. The power hitting is sans the brute muscle power displayed by the likes of West Indians Andre Russell and Chris Gayle.

What makes Sharma unique, reckon brand experts, is his power of being a celebrity minus all its trappings. Though he may not be Mr Fashionable or Mr Rebellious like many multi-millionaire cricketers around him, brands looking for understated style and elegance would always fall for him, says Abhik Choudhury, founder, Salt and Paper, a brand consultancy firm.
“What he lacks in haircuts and tattoos, he makes up handsomely in statistics,” he adds, highlighting the many firsts by the batsman. Take, for instance, Sharma’s four tons in T20. Another layer of Sharma’s personality that makes him endearing are his ‘credible looks’ and ‘being a boy next door’. His zero obsession with looking like a Greek God or flaunting six-packs creates an aura of ‘believability’ that not many cricketers, except Dhoni, can bring to the table.

Choudhury decodes Sharma’s muted charisma. The son of a small transport firm caretaker, raised by grandparents because of his parents’ meagre salary, schooled and trained with scholarships and who went on to become one of the best white-ball batsmen that the world has produced seems like a good biopic in the making. His story, Choudhury reckons, is inspirational and touches an emotional chord with people. At times, not being loud magnifies your loudness, when one backs it with achievement. “Bad guys with Porsches are great, but dating a nice guy with a BMW M5 is awesome,” he adds.

Sharma is modest when he speaks about his struggle. There would hardly be any cricketer, he points out, who would have got things on a platter. Conceding that the journey to become a cricketer was tough—catching early morning trains, travelling across Mumbai in the luggage bogey during peak hours due to big kit bags, facing rejection many times, fighting self-doubt and poor form—but Sharma says he has enjoyed the ride. “I have no regrets. Struggle was fun,” he says. “I am living my dream, and I want to keep enjoying it.”

Brands are keen to buy this ‘dream’ of Sharma. From ecommerce major Flipkart to sportswear biggie Adidas to TV brand Sharp, the cricketer has over a dozen brands in his endorsement kitty. Though the numbers might not be as exhaustive compared to someone like Virat Kohli, for instance, Sharma is not bothered. Reason: The brands endorsed must reflect his character. There has to be a perfect fit. “I don’t believe in adding brands just to beef up my kitty. You just can’t associate with someone just for the sake of it,” he says.

Rejecting deals has become a norm for Sharma over the last few years. He won’t name the brands that he has declined, but says he prefers being hyper selective. “You are the face of the brand, and you are reaching out to millions of fans with it. So you can’t fool them.”

Given Sharma’s discipline in hunting for a brand-endorser fit, it’s not hard to fathom why his endorsement kitty is not bloated. There’s another aspect, though, that makes a brand reluctant in roping in the star batsman.

Apart from talent and performance on the field, brands also look for another facet in an endorser that adds a layer of aura to his/her personality, says Abhijit Avasthi, former Ogilvy honcho and co-founder of Sideways, an advertising agency. Avasthi explains, “While Virat has tremendous swag and glam quotient, Dhoni has an aura of being cool and a smart boy from a small town. Sharma, in contrast, doesn’t have an added layer to make him a complete package for the brands.”

Sharma, however, doesn’t believe in changing his DNA to become either more expressive on the field or turn animated and theatrical to catch the cameras. “Keeping calm and staying composed is my way of handling things. And it has worked for me. So why change it?” he asks.

As India gets ready to win the cricket World Cup, which it last won in 2011, Sharma reckons he is ready for the big challenge. Ask him if he is nervous or feeling overwhelmed as he would have to cope with the expectations of millions to perform, he flashes his cryptic smile. “I don’t take stress. It’s natural for me, and am lucky in that sense,” he repeats.

What Sharma also doesn’t stress about is taking questions about the controversies that some of the players, in India and globally, keep getting sucked in, threatening the character of the game. Is cricket still a Gentleman’s Game? “Absolutely, 100 percent,” he says, without blinking an eye.
There are lots of boys, he points out, who are aggressive on the field, but that doesn’t mean there is no respect for the game. “Cricket stays a gentleman’s game, and will always remain so,” he signs off.

Tweets by @forbes_india
It's never been easier to be a CEO, and the pay keeps rising
The myth of perfectionism