ShareChat, widely seen as the largest Indian social media venture, has raised a fresh round of funding as well, to double down on product development and to expand the reach of its new short-video creation and sharing platform, Moj 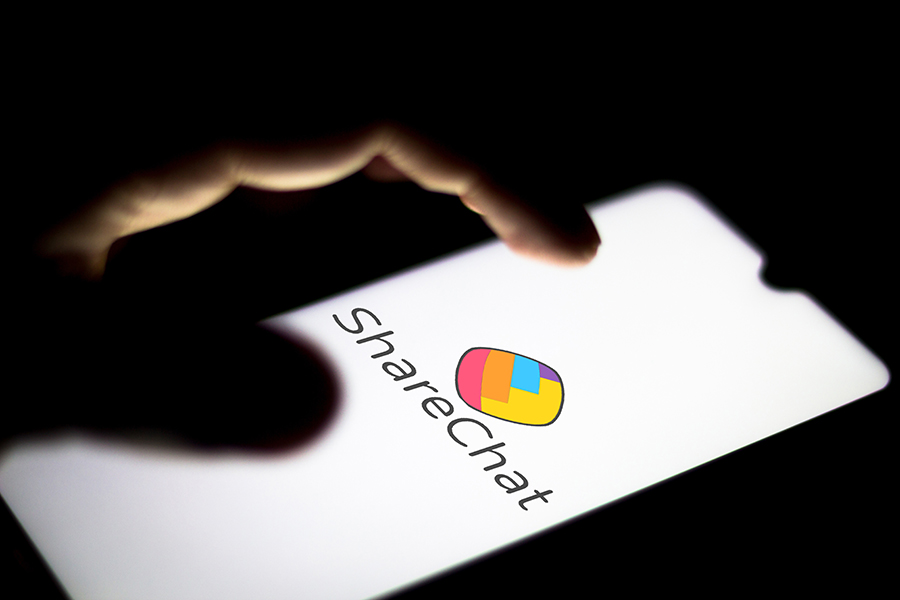 Image: Shutterstock ShareChat, one of India’s top social media ventures, supporting 15 local languages, has completed a pre-series E fund-raising round of $40 million, as it seeks to further grow the Indic content and media ecosystem online. The money will be used to grow the reach of Moj, the venture’s newly launched short-video platform. Large parts of the fund have been earmarked towards product development, growing Moj’s creator ecosystem and establishing partnerships with music labels, ShareChat said in a press release September 24. “ShareChat is on a rapid growth path and is spearheading the growth of the Indic language social media landscape,” Ankush Sachdeva, CEO and co-founder said in the release. “Our short-video platform Moj has been on an explosive growth trajectory since its launch. This funding will help us further invest into our product development, ML (machine learning) capabilities and helping the creator community.” As India’s internet usage begins to spread significantly beyond the English-speaking user base, ventures such as ShareChat aren’t the only ones to tap into the trend. E-commerce giants Amazon and Indian rival Flipkart, a Walmart unit, have launched support for local languages beyond Hindi. Earlier this week, Amazon announced that its Indian e-commerce site, Amazon.in is, now available in four south Indian languages of Kannada, Malayalam, Tamil and Telugu, taking access to its site to “the next 200-300 million customers”. Customers can discover deals and discounts, read detailed product information, manage their account information, place and pay for their orders, including bill payments, recharges, money transfers, track their orders and view order history, in these four languages as well, Amazon said in a press release on September 22. The support for these languages is available on both Android and iOS operating systems, on apps, mobile and desktop sites as well. Amazon worked with expert linguists to develop an accurate and comprehensible experience in each of the languages.  The team has chosen commonly used terms over perfectly translated words to make the shopping experience authentic and easily understandable. Customers will find the most common words that are actually used in their daily lives being used on Amazon’s Indian site. Amazon launched support for Hindi in 2018. “Hundreds of thousands” of customers from Tier 1, 2 and 3 cities from several Hindi-speaking states have switched to shopping in Hindi. In the past five months, the adoption of Hindi for shopping has grown by 3X, Amazon said in its release. In March this year, Alexa, Amazon’s cloud-based voice service, was introduced on the Amazon shopping app for Android devices so shoppers could use voice commands. Alexa, which runs Amazon’s Echo range of smart speakers, understands proper nouns in languages including Hindi, Marathi, Gujarati, Kannada, Bengali, Tamil and Telugu. With the launch of Alexa in Hindi, customers can ask questions and interact with Alexa in Hindi or ‘Hinglish,’ in addition to English. Amazon’s Prime Video service has titles in Hindi, English, Marathi, Tamil, Malayalam, Gujarati, Telugu, Kannada, Punjabi and Bengali. Authors can self-publish their work on Amazon’s Kindle Direct Publishing in five Indian languages including Hindi, Tamil, Malayalam, Marathi and Gujarati in addition to English. In 2019, Amazon launched an automated messaging assistant in Hindi, and enabled customers to speak with customer service executives in English, Hindi, Kannada, Telugu and Tamil too. In June, Flipkart said it had added support for Tamil, Telugu and Kannada. The company already supported shopping in Hindi. At ShareChat, the fund raise included two new investors who invested through their family offices. Hero Motor Corp chairman and CEO Pawan Munjal, has invested through his family trust. And Ajay Shridhar Shriram, chairman of DCM Shriram, has invested through the DCM Shriram Promoters Family Office. “India’s IT industry has made an indelible impact on the global economy in the recent decades and now India’s new-age start-ups are building on the existing resources to reach the next growth stage,” Munjal said in ShareChat’s press release on September 24. “The economic and demographic ecosystem of the internet universe is primed for companies like ShareChat and their products.” ShareChat is capable of building a significant global customer base, he added. ShareChat is fostering “a whole new social media product ecosystem in India,” Shriram said. “We are equally passionate to contribute to this journey, helping them emerge as leaders in India and also, strong contenders on the global landscape,” he added.

ShareChat and Moj together form one of the largest content ecosystems in the country. The two together have over 240 million MAUs (monthly active users) presently, with ShareChat alone exceeding 160 million MAUs in the past month, with the average daily time spent by users on the platform at 31 minutes. Moj has garnered over 80 million MAUs with users spending on an average of 34 minutes on the platform. Twitter previously led ShareChat’s Series D funding round with additional backing by SAIF Partners, Lightspeed Ventures and India Quotient, the three of which have been involved with ShareChat as investors since its early days. With the new round, ShareChat’s total funding now stands at $264 million. Madhukar Sinha, Partner, India Quotient, said, “ShareChat’s success has given immense hope to India’s startup fraternity, and motivated entrepreneurs to take audacious bets in India’s internet ecosystem.” India Quotient’s association with ShareChat goes back to the venture’s inception days, Sinha said, when the VC firm took a bet on the idea of an ‘Indian Social Media Company’. “We believe Moj is designed for bigger success and will succeed across India, and beyond India in the years to come.”

Tweets by @forbes_india
Can dogs sniff out the coronavirus?
Kashyap Chanchani: What Jio's funding means for India's startup ecosystem