The god of all things: Answering India's prayers, the digital way 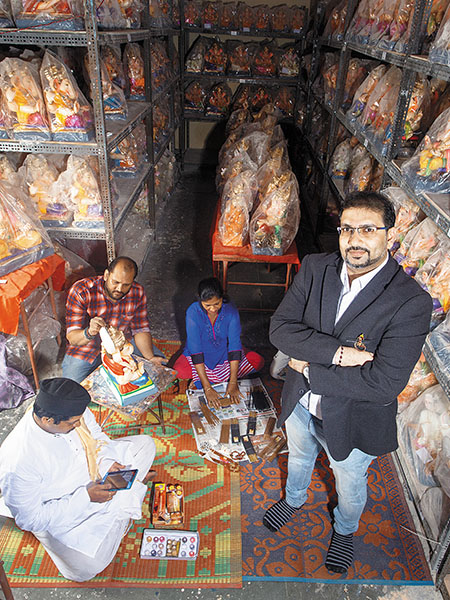 Ruchika Kohli, a 44-year-old marketing director based in California, logged in to Skype in the wee hours not to speak with a friend or relative in another time zone, but to have a puja performed for her, virtually, by pandits in India.

“Growing up in India, pujas were a big part of my life,” she says. “But I never learnt how to do them myself. It was difficult to find a pandit and samagri [items required for a puja] in the US, so I had given up on the idea, until I heard of Shubhpuja.”

Shubhpuja is an online destination for Vedic practices, set up in 2013 by former mergers and acquisitions consultant Saumyaa Vardhan. The portal has a network of verified pandits in India, and has them perform pujas over Skype. So when Kohli booked her puja—and she has used the service five times since—an auspicious time was calculated for her in Indian Standard Time, and she received a kit with items she would need through the ritual.

“At various points, the pandits asked me to get involved—pour rice here, make a tika there,” says Kohli. “It transported me right back to my family home back in India, when my father would perform the rituals.”

When Shubhpuja started out five years ago, it was one of the first such services, aiming to add a touch of tech-convenience to religion. Now, the market landscape has changed. India’s tech-religious industry is estimated to be worth $40 billion, according to market research firm Gartner, and technology entrepreneurs are beginning to see large potential in the massive, mostly unorganised sector.

“It’s taken time to change mindsets, but in the past five years, the way consumers look at online payments and tech adoption has transformed,” says Vardhan. “The idea was also to lay down standard operating procedures for various pujas and centralise the samagri-buying process, with transparent pricing. A lot of credit for its growth goes to the market itself.” 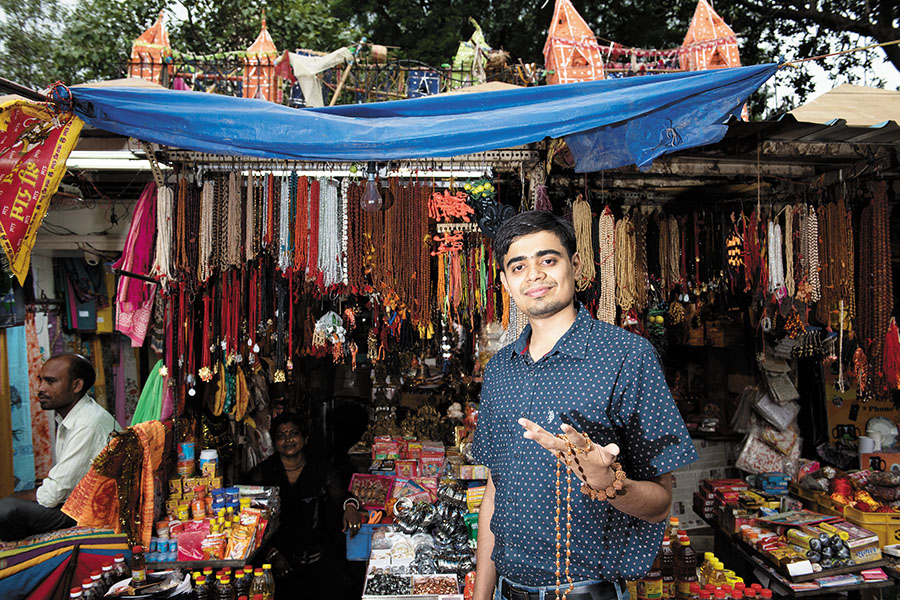 A recent entrant is MyOmNamo, a web service that launched across India and the UAE in January 2017. It works just like Uber, but for pandits. And unlike Shubhpuja, they focus on offline, on-ground pujas. So when a user books a puja via the app, an algorithm will search through the 2,000 verified pandits in the system and allot a nearby one to the user. At the back end, the pandit receives a notification on his app and can choose to decline a request. The customer will be intimated with the pandit’s details, along with a rating from previous users, much like that of an Uber driver. On the day of the puja, the pandit will arrive at the user’s home, along with a puja kit packaged by MyOmNamo and made by women self-help groups in and around Mumbai. Shubhpuja has delivered more than 14,000 services to customers around the world, while MyOmNamo has more than 10,000 users across India and the UAE.

When Vardhan started out with Shubhpuja, convincing pandits to get onto the platform was a hurdle. “Pandits took offence at the idea of ‘taking up a job’, even told me that ‘kalyug’ had arrived. But I went to relevant institutes and explained to them in person that it would help them reach out to devotees across the world, without having to generate leads or market themselves. Now, we have 500 registered pandits,” says Vardhan.

MyOmNamo, however, found willing partners when it started looking out for pandits in October 2016. “Everyone is tech-savvy, including the purohits,” says founder Makarand Patil, who runs a business intelligence firm called Big, the parent company to MyOmNamo. “Demonetisation [in November 2016] turned out to be a blessing in disguise. More people became used to the idea of using credit cards to pay for god, both in terms of users and pandits. For the latter, we helped them in many ways, including with marketing and an additional stream of income.”

Interestingly, Patil says, such ventures also help with a problem many young pandits face—getting married. Until now, all their income was in cash and they had little to show on the books. By being associated with online services, they set up bank accounts and receive digital payments, which also makes them more eligible for loans on homes, vehicles and so on, eventually raising marriage prospects. “I see many benefits of being on the app,” says Bhalchandra Dandekar, a 38-year-old pandit associated with MyOmNamo. “I don’t have to chase payments and this helps with my home loan. Moreover, our vision is the same—to spread services where purohits are not easily available.”

During busy times such as Ganpati puja, MyOmNamo takes pandits from India to Dubai to keep up with demand. “I have travelled to Dubai twice with the team,” says Dandekar, who previously worked as a SAP executive in the tax department of an Indian conglomerate and has a Six Sigma Black Belt certification. “Often, users outside of India are more devout.” 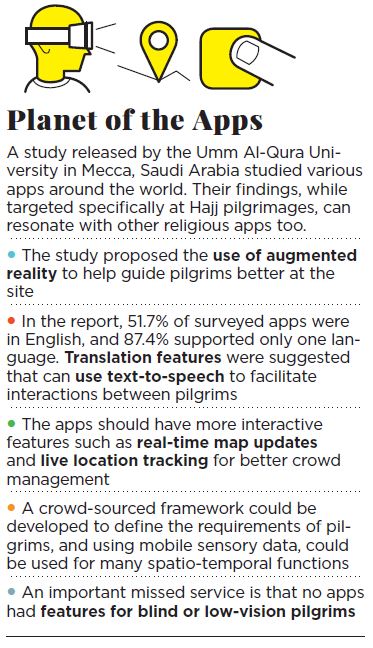 All the pandits on MyOmNamo come through references and have to provide KYC documents and undergo police verification. For each puja, 80 percent of the revenue goes to the pandits and Patil’s company takes a 20 percent convenience fee. The app also lets users locate the nearest temples, organise a ‘pandit bhojan’, find bhajan and kirtan groups and get their horoscopes made, among other features. In the first three months of its launch, MyOmNamo clocked in a revenue of ₹90 lakh; they closed the first year at ₹3.3 crore, and raked in ₹2.2 crore from January to March 2018. Shubhpuja, meanwhile, has been growing at a compound annual growth rate of 30 percent year-on-year.

“Religion is the lowest common denominator with all the people, and over time, studies have shown that religiousness has actually increased,” says Asheesh Raina, research lead (Avanade) at Accenture. “Moreover, cost-bearing religious entities have also realised that they can function at scale only if they organise themselves akin to an enterprise. So most temples are now IT-enabled and focus on the experience they are providing—technology is a quick, easy way to do this. Such apps are an extension of this, built on the concept that people have more money and are willing to spend more of it on religion, but face challenges in terms of time and accessibility.”

New avenues
As the market has evolved, so have the services. Shubhpuja now offers astrology and Vastu Shastra-based consultation, and puja services from births to funerals. They also create content on the logic of the rituals, published across various platforms, some of which has transcended the realm of religion. “We had visitors from the US request us for a workshop about Holi,” Vardhan recalls. “We told them the story behind the festival of colours: Krishna was considered dark, so his mother told him to put colour on everyone so that they would all look the same. A week later, they returned to the US and asked us to conduct a Holi celebration there, to help eliminate racism.”

OnlinePrasad, which started in 2012 as a prasad home-delivery service from temples across the country, now positions itself as a full-service destination for religious matters. They have since received funding, and added functions such as live-streaming of pujas, astrology, VIP temple ticket bookings and spiritual travel and tourism. “In 2012, ecommerce was just picking up,” says founder Goonjan Mall, a 29-year-old Bits Pilani graduate who has worked as an analyst with Bain & Company. “The market has evolved significantly. Now, about 80 percent of our payments are made online, and about 94 percent of those are via mobile. Earlier, we were restricted to the metros, but now 40 percent of our traffic comes from rural markets.” 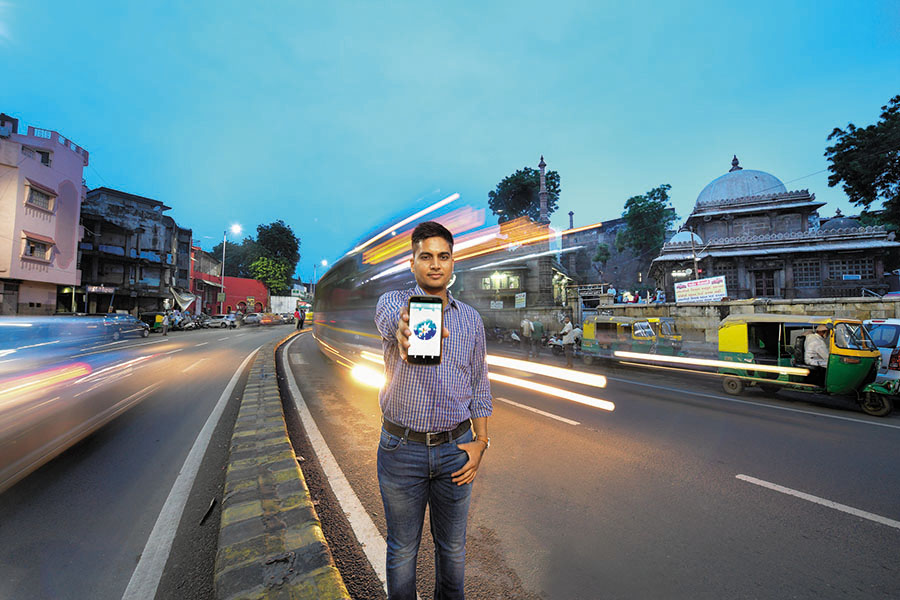 Says serial entrepreneur Ganesh Krishnan, who has invested in OnlinePrasad, “Religion has a passionate audience and when these devotees have tasted the convenience of ecommerce on other fronts, such as buying groceries or movie tickets, it has organically translated into all areas of their lives. Moreover, such businesses have an edge over traditional ecommerce—no one negotiates for discounts with god; there are no returns on prasad orders; and the business is recession-proof.”

Consider Navdip Joshi, 36. The Bengaluru-based project and portfolio consultant uses OnlinePrasad 15 to 18 times a year. “It’s great for people like me who want to offer gratitude to god, but don’t have the freedom to travel often,” he says.

While a majority of such services are aimed at the Hindu faith—“it’s a simple function of market size,” says Mall—there’s a technological buzz among other religions too. Patil of MyOmNamo, for instance, received $1 million in funding from HNI investors last month, and plans to use that money for expansion to the US and to create two new apps, one for Islam and another for Christianity. They have on-boarded two maulvis already. On MyOmNamo, they plan to add animated stories and bookings for yoga studios.

The Islamic app is likely to be used for nikaah and other celebratory occasions; the Christianity app can be used to perform masses in India and other countries. “Indians abroad often seek priests from Kerala,” says Patil.

Another service for Christians in Kerala, KeralaEventsOnline.com, livestreams funerals, baptisms, holy communions and weddings. The website also has a gallery of archived videos for relatives and friends to re-watch the event after the broadcast. It’s aimed at those who live abroad and can’t make it to important events in person. At funerals, they shoot all the way from home to the church and cemetery, until the doors are shut. Says co-founder Navas Ch, “When we stream major feasts, more than 1 lakh people around the world tune in.”

However, business has been dropping lately. “When we started out in 2008, livestream technology was cutting-edge,” he says. “Now, everyone has mobile phones and can go live. We get fewer requests now than we did earlier.”