Behind the scenes at CIAL—the world's first solar-powered airport 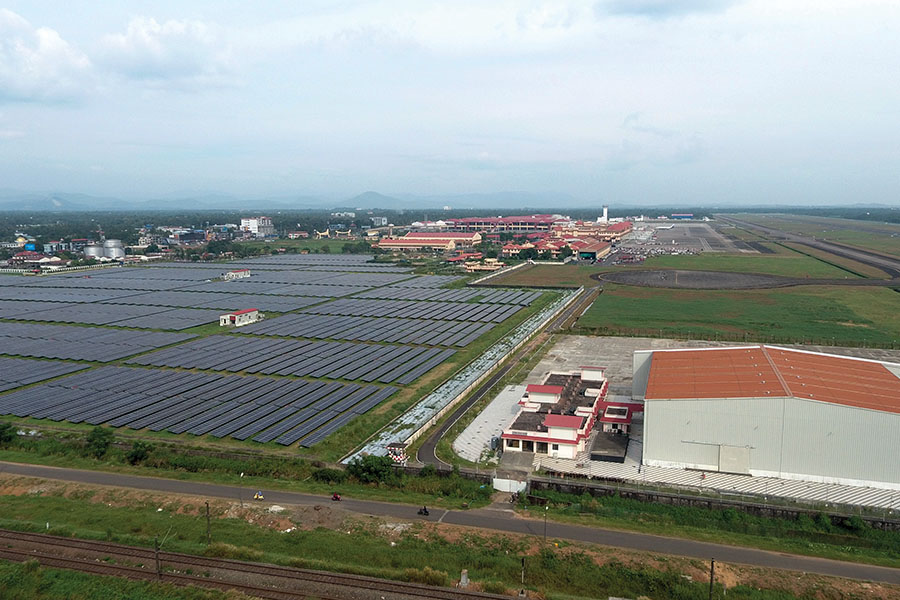 Cochin International Airport has its own solar power plant on 45 acres within its complex
The Cochin International Airport has had the distinction of being a first of its kind even before it started operations. In 1999, it was the first Indian airport to have been built on the public-private-partnership model. The project was funded by the Kerala government and foreign investors. Since it began operations with an international flight to Saudi Arabia’s Dammam, the airport has become the country’s seventh busiest, handling more than 1,000 flights a week. It sees over 10 million passengers annually, a number that is expected to rise further to 30 million by 2021-22.

Since the past few years, the airport has also been a hotbed for innovative sustainable practices. Much of that has to do with the setting up of CIAL Infrastructures Limited (CIL) in 2012, a subsidiary company that focuses on power and other infrastructure sectors.

Under the aegis of the CIL, in 2015, the airport became the world’s first to fully run on solar power. “We initiated a pilot project in February 2013 as part of our plan to shift to renewable energy by setting up a 100 KW unit,” says VJ Kurian, the managing director of the Cochin International Airport Limited (CIAL). Once that was found to be financially viable, it invited tenders to set up a 12 MW solar power project within the airport complex, on 45 acres that was previously allocated to a cargo handling unit. German engineering company Bosch won the bid for ₹62 crore, setting up a solar power plant that, in three years, has begun to produce excess power that it sells back to the grid.

“When we realised that our power bill is on the higher side, we contemplated possibilities,” says Kurian, a soft-spoken former bureaucrat. “Then the idea of tapping the green power came in. We consume around 48,000 units (KWh) a day. So if we can produce the same, that too by adhering to the sustainable development model, we could send a message to the world.”

The maintenance and upkeep of the solar panels have also triggered more green ideas. Over the past year, the airport has been busy farming organic vegetables on its campus. It has grown over 80 tonnes in a year—378 kg of pumpkin, over 2,000 kg of ash gourd, 425 kg of cucumber among others—selling those to the staff and the open market. 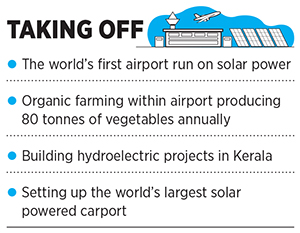 The farming is mostly laid out in between the solar panels and the adjoining areas. It helps retain the moisture on the ground that, in turn, reduces dust; the water from cleaning the panels is also used for farming. The idea came to the airport staff while clearing out weeds around the solar panels. “There was a lot of weed growth near the panels,” says Kurian. “That’s when we decided to use the water for irrigation. The water used for the panels were then used to irrigate the vegetables and it also helped keep the land moist, avoiding any dust.”

The Kerala government has now roped in the airport authorities to develop inland waterways, of over 450 km, that can connect the airport to various tourist destinations through solar-panelled boats. Work on the route between the airport and the city has begun already. “We keep our costs low. That’s probably why the government turns to us,” says Kurian.

Now, in the next phase of growth the airport is setting up eight small hydroelectric power projects that can generate nearly 50 MW. “Small, mini and micro hydropower are well-recognised renewable sources that can provide electricity, especially to remote rural areas and hilly terrains in a cost-effective and ecological manner,” says Kurian. “Kerala has a vast untapped hydro potential. The state is endowed with a large number of mountain streams originating from the higher elevations of the Western Ghats.”

The airport has built a parking area of solar panels (carport) that produces over 2.7 MW and accommodates about 1,400 vehicles. Over the next year, CIAL plans to increase this to 5.1 MW, making it the world’s largest solar-powered carport.

Overall, the airport reckons that its green practices helps it to reduce its carbon footprint by over 3 lakh metric tonnes, which is equivalent to planting 3 million trees.

Over the next few years, the airport is gearing up to make its presence felt across the world. It has already signed an agreement to provide technical assistance for setting up solar power plants at three airports in Ghana.

“The Cochin airport has been absolutely progressive since the time they started out,” says Mark Martin, founder of Dubai-based health and safety consultants Martin Consulting. “In comparison to an Airport Authority of India, the CIAL is certainly driven by a quest for innovation that is evident in the airport’s plan to give back to the nature. Perhaps, this is a model that airports across the country can follow, as long as weather pattern permits.”