Changing the dynamics of tobacco financing, one investor at a time

Tobacco Free Portfolios, a small NGO in Australia, is altering how the financial sector globally perceives tobacco finance, in a bid to bring down the health costs of tobacco products on society 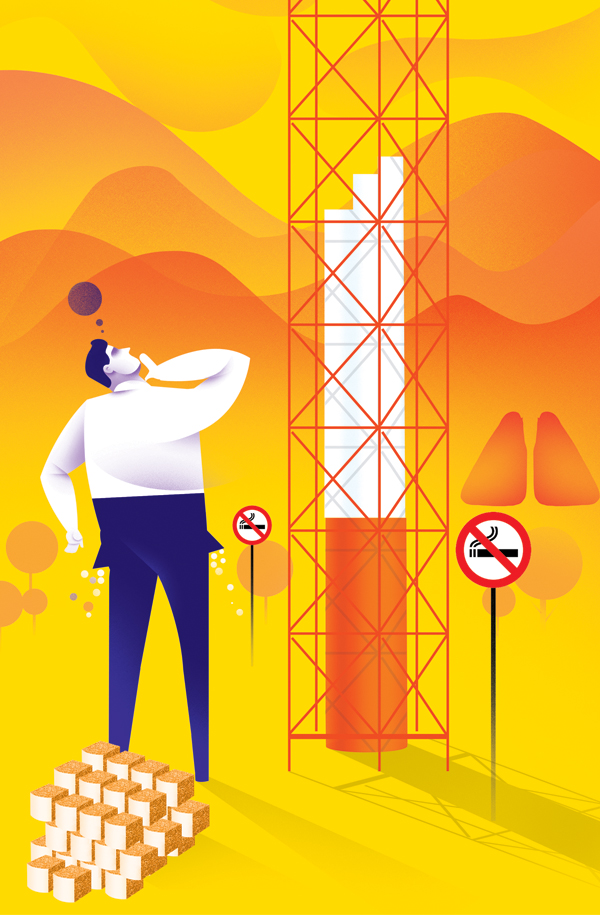 Illustration: Sameer Pawar
• At least 7 million people die due to tobacco use every year, says the World Health Organization • In this century, nearly 1 billion people will die prematurely because of tobacco  • The World Bank says that the total economic damage of smoking—medical costs and productivity losses from death and disability—is more than $1.4 trillion per year, equivalent to 1.8 percent of the world’s annual Gross Domestic Product The numbers aren’t new, but they have ceased to shock. The global battle against tobacco is flailing, and India is no exception. Tax and cess hikes on cigarettes and tobacco products, and ghastly health warnings on packaging, have managed to reduce the number of smokers only just, from 34.6 percent in 2009-10 to 28.6 percent in 2017-18, according to the Global Adult Tobacco Survey Factsheet India: 2017-2018. And despite a ban on gutka, India still remains one of its largest consumers. Now, an Australian not-for-profit, Tobacco Free Portfolios (TFP), is trying to hit where it hurts the most: Cut off finance to tobacco companies. Since August 2018, TFP has convinced over 100 banking, financial service and insurance [BFSI] companies to sign a pledge to review their position on investing in tobacco manufacturers.

The 109 signatories of the Tobacco-Free Finance Pledge represent over $9.5 trillion worth of assets under management (AUM), corporate loan book, and insurance premiums actively under review. “We would like to see an end to the financing of tobacco,” says Dr Rachel Melsom, TFP’s UK and Europe director.  “Tobacco companies have been playing the ‘adults have freedom of choice’ card, but when children take up smoking at 10 or 11, it’s the start of an addiction. This is not an informed choice, it is not freedom of choice. The costs tobacco cause are externalised to society, but the profits are internalised to the tobacco companies.” Any action against tobacco has the potential to impact 14 of the 17 sustainable development goals set by the United Nations in 2015, while most other issues address just one or two. So, the scope of impact caused by just moving out of investing, insuring or offering credit to one single product is enormous. 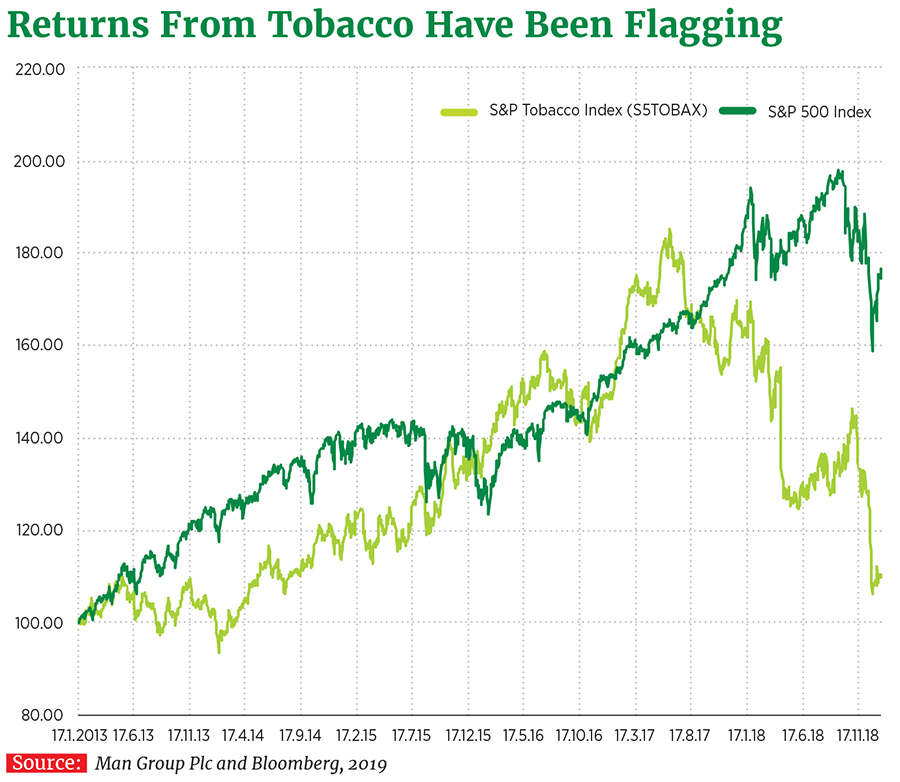 The beginning
TFP was founded in 2012 by Dr Bronwyn King, a radiation oncologist in Australia, after she discovered that her pension fund was investing money in tobacco, the very product that was threatening the lives of her patients. The NGO’s work has grown into a global movement, and led to the launch of the Tobacco-Free Finance Pledge last September, on the sidelines of the UN General Assembly at its headquarters in New York City. At the launch, WHO Director-General Dr Tedros Adhanom Ghebreyesus said, “The world invests billions of dollars in rewarding an industry that destroys human health and causes untold suffering… it makes no sense to fight tobacco and the tobacco industry with one hand, while financing it with the other.”  BNP Paribas Asset Management’s AUM worth €200 billion is tobacco-free. A founding signatory of the Pledge, the company’s position extends to all group entities, including subsidiaries, affiliates, and joint ventures. The damage caused by tobacco, including International Labour Office statistics like 60 percent of its farming done by children, drove the company to its anti-tobacco stance. But it didn’t come without challenges. “We sometimes had to terminate relations with long-standing clients, inducing a loss of revenues. However, implementing the exclusion is a demonstration of the active role the financial sector can play to contribute to a better world,” said Franciska Decuypere, country head, BNP Paribas India. “We are convinced this decision will pay in the long run.” So, how is a small outfit from Australia helping rewrite the norms of the BFSI industry? The TFP strategy has been to translate the health and social costs of tobacco into finance speak. It equips itself with the latest data and evaluates future risks, valuations, and metrics to have a “reasoned, informative conversation” with participants of the financial sector. What also helps their cause is that in countries like the UK, France, Germany and the US, consumers are waking up to the dangers of tobacco and the number of smokers is falling. The Pledge does not require signatories to be tobacco-free immediately, as contractual obligations may require due diligence before investments can be altered. However, most signatories have announced tobacco-free policies since signing up: Australia’s First State Super, a profit-for-member superannuation fund, with A$81 billion in AUM went tobacco free in July 2012. In May 2016, global insurance and asset management giant AXA with €1.428 trillion in AUM announced their tobacco-free policy. France’s national sovereign reserve fund Fonds de Reserve pour les Retraites, with €35 billion in AUM went tobacco free in December 2016. Business with morality
Historically, sin stocks—alcohol, tobacco and gambling—have given outstanding returns, getting a pride of place in a fund manager’s portfolio. However, that has changed in the last few years. European market research shows the share prices of tobacco companies falling significantly in the last two years in the midst of increasing regulations and taxation, in line with the WHO Framework Convention on Tobacco Control (FCTC). As countries start adhering to the UN Treaty and WHO FCTC, these companies are now also less likely to win litigations against governments for implementing controls. “Historical returns of sin stocks were good, but the recent trends show a different picture,” says Rishabh Parakh, CEO, Money Plant Consultancy. According to Bloomberg news, British American Tobacco had its worst year in 2018, with its stock falling 50 percent, while Marlboro-maker Philip Morris International’s stock fell 37 percent as the US Food and Drug Administration increased regulations against the industry. Japan Tobacco’s stock has been declining since June 2017, when it was at £4,192, to £2,547.50 on May 28 this year. Investor Chronicle, a UK magazine, notes that tobacco has been the single worst-performing sector in 2018 in capital terms, excluding dividends on the FTSE All-Share, down 41 percent compared to a 9 percent decline across the board. The Indian challenge
In India too, the government has levied heavy taxes on tobacco companies, affecting their market caps: Among the top 100 companies by market cap, there are only three sin stocks—United Breweries, United Spirits and ITC. “You would find many non-sin stocks giving better returns than sin-stocks, which proves the market has ample opportunities to generate better returns,” says Parakh. A 5-year CAGR shows that only three of five tobacco-makers—Delta Corp (16.13 percent), Godfrey Tobacco (8.76 percent), VST Industries (13.51 percent)—gave returns similar or slightly better than the benchmark. The fact that finance companies can play a huge role in making society tobacco-free should be the major trigger behind throwing an investor’s weight behind non-sin stocks and not the tobacco sellers, adds Parakh. 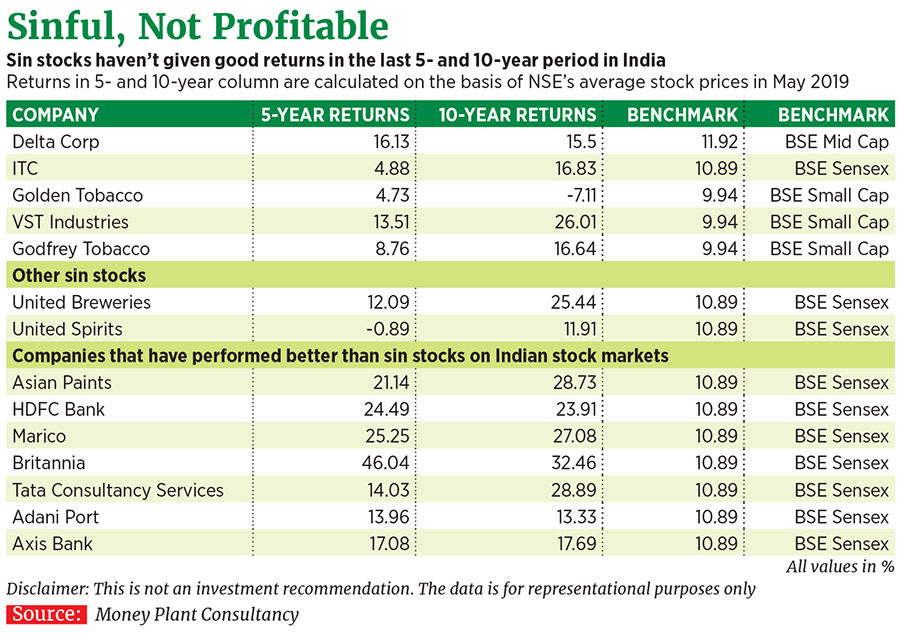 Last December, TFP set up an India office with Dr Sanjana Sikri as its director. Sikri doesn’t see any changes soon: “Change will happen but it’s not coming in 2019 or 2020.” While conversations with the BFSI sector are under way, she says, people here like to talk about sustainability but no one wants to take the first step. Compared to developed nations, Indians are still learning to trust the markets and invest in products like mutual funds. It wouldn’t be surprising if a majority of investors doesn’t prioritise sustainable options. A shift will come only when investors demand products that don’t put their money in tobacco, says Sikri. Besides the fact that there are no legal provisions to stop companies from investing in tobacco, “the Life Insurance Corporation—a government subsidiary—is a significant investor in ITC,” says Dr KK Agarwal, president Heart Care Foundation. “There is a conflict of interest between the government and tobacco policies.” Apart from LIC, other public sector insurance companies like General Insurance Corporation of India, The New India Assurance Company, and The Oriental Insurance Company also hold stakes in ITC. The New India Assurance company has stake in VST Industries too. India is also a major producer and exporter of tobacco. “The government earns thousands of crores annually from tobacco and the lobby in India is very strong. Any real change will need strong political commitment and will,” Sikri says.

Tweets by @forbesindia
Do consumers put their money where their mouth is?
Thoughts on winning