Arun Bharat Ram's sons are determined to not make the same mistakes as other family businesses. With eyes on the global market, they are stewarding the ship 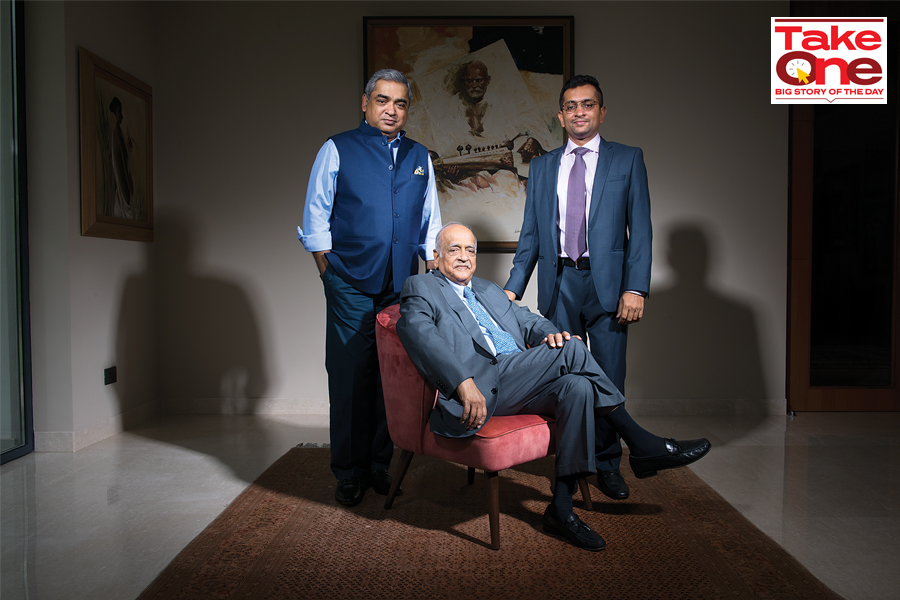 Sons Ashish (left) and Kartik Bharat Ram are now the stewards at SRF Limited, where the increase in market capitalisation over the last six years has catapulted Arun Bharat Ram (seated) to the billionaires list
Image: Amit Verma

Amongst the first points that Kartik Bharat Ram makes, as we settle in for our interview, is their steadfast intention to avoid a repeat of what they have seen in several business families: Sibling rivalry resulting in a split. Indian business history is littered with founding families destroying promising businesses. The Bharat Ram family saw its own business split in 1999. Arun Bharat Ram’s sons are clear they don’t intend to go down that path.

It’s plain to see why. They’d clearly have a lot to lose. Since taking over SRF, or Shri Ram Fibres as it was then known, as part of a family spilt, this branch of the Bharat Ram family has built a business that is valued at ₹35,000 crore. One of their lines—specialty chemicals—has immense growth potential. Another business, refrigerant gases, too has a promising future as India’s cooling needs grow. The increase in market capitalisation that has taken place mainly over the last six years has catapulted chairman Arun Bharat Ram, 80, worth $1.8 billion, to the Forbes Billionaires List. Sons Ashish, 52, managing director and Kartik, 49, deputy managing director, are now the stewards of this business.

Equally theirs is a story of efficient capital allocation, long-term thinking and the benefits of a diversified revenue and profit stream. These businesses have taken decades to put together and their durability is sticky. That is one reason why the market is valuing it at a 35 price to earnings multiple even though a part of their profitability comes from legacy businesses with poor growth potential. In the year ended March 2020 SRF had revenues of ₹7,209 crore and profits of ₹1,019 crore. Its return on equity capital was at a decadal high at 21 percent.

The brothers, after having taken the business this far, are about to embark on a new and potentially more exciting phase. SRF is now on track to produce a significant amount of free cash flow. What Ashish and Kartik do with this is likely to shape their legacy. A part of it will be returned to shareholders based on feedback they’ve received from the investor community. Over the past 18 months the company has returned nearly ₹200 crore.

While there are enough organic opportunities, they plan to allocate some money to startups in the chemistry space. “We’d like to put a certain corpus in new world businesses adjacent to what we are doing today in the world of chemistry,” says Ashish. Successful entrepreneurs from Sanjeev Bikhchandani to Alphabet founders Larry Page and Sergey Brin have used this playbook and been handsomely rewarded by the market. If the Bharat Rams pull it off they’d enter a hallowed club of ‘spawners’.

Disparate Businesses
The company that Arun Bharat Ram took over was also the one he started his career at. It was in the 1970s that he’d been sent to Madras (now Chennai) to run a technical textile plant that produces nylon tyre cord fabric. These are used as reinforcements in tyres to give them strength and stability.  In the 1980s the business got into belting fabrics—the long belts seen in iron ore mines to transport ore over long distances. 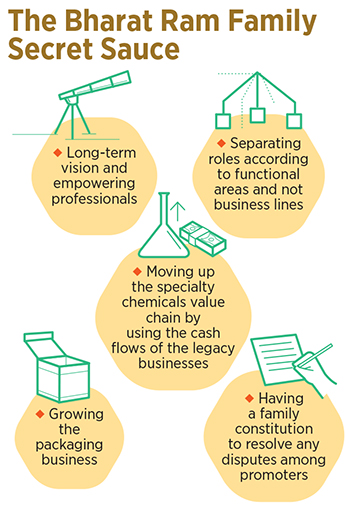 In those licence raj days business decisions were made based on the licences granted and in the 1980s the group got permission to produce flourochemicals that go into refrigerant gases. While India was still a small consumer, the view was that this consumption would grow. In 1987 the Montreal Protocol mandated the phasing out of chloroflourocarbons (CFCs) and the company found itself staring at a loss in business.

It was during this time that Arun Bharat Ram took a decision that eventually led to the setting up of the speciality chemicals business. He set up a chemical research and development wing within the company. Without that SRF wouldn’t be able to compete in the refrigerant space. By 2006 they had a new plant producing HFC134, a gas that is widely used as a replacement for HCFCs.

At that time the senior Bharat Ram wanted to explore the world of fluorine. The team of researchers that is now 400 strong went about looking for newer molecules SRF could develop. But it was another decision that proved to be a capital allocation masterstroke. As per the Kyoto Protocol, the company was awarded a project for GHG emission reduction for an annual sanction of 3.8 million carbon credits. This money was used in the development of new fluorination chemistry. Today SRF is present mainly in agri intermediates and counts global companies like Bayer and BASF as its clients with long-term contracts.

SRF’s expansion in the specialty chemicals space comes at a time when the sector is in favour with several Indian companies carving a niche. Ashish does allow that a majority of the company’s valuation probably comes from the strides it has made in this business. The space is highly specialised with most molecules having between two and four global manufacturers. Proving that a company has the chemistry skills to formulate these molecules is as important as manufacturing them to scale. At the same time China has become more stringent in its environmental norms leaving customers scouting for other manufacturers. Industry watchers talk about a ₹100,000 crore market capitalisation company emerging from this sector in the next five years.

Lastly, there’s the packaging business that landed in SRF’s lap during the family split. This was a business that initially made film for VHS tapes and has been repositioned over the years to make flexible packaging. Think of the packaging in a pack of Frito Lay chips and it has likely come from SRF. This business finds itself in a sweet spot on account of growing consumption.

Business Stewards
As SRF has grown Ashish and Kartik have divided their responsibilities according to function. Ashish is in charge of strategy, finance and operations while Kartik looks after capability building (IT, human resources, corporate communications, and quality management). Under them each business has its own CEO who reports to them according to the functions they control. “This way there is less scope for misunderstanding,” says Kartik, “as no one person can play favourites.” There are also regular family meetings to iron out any disputes that may arise.

On the execution front investors have liked what they have seen so far. Once such investor is Singapore-based Amansa Capital that has a 5.6 percent stake in the company. Narender Nagpal, a partner at the firm, recalls being impressed with the long-term vision of the promoters at a meeting in 2014. He’d tracked the company since 2011 and was comforted with the fact that they were using cash flows from carbon credits and the nylon tyre cord business to develop the specialty chemicals operation, which had a more durable moat. They’d built a great team that was there for the long term. “They are focused on going up the technology ladder in their core business of chemical intermediates and that is why they have moved up the margin curve,” he says.

Both Ashish and Kartik are clear about not wanting to demerge the company across its business lines. While that may make sense from a market positioning standpoint, a unified structure allows them keep the cash flows fungible. The nylon tyre cord business is a sunset industry with growth of no more than a percent or two every year. Still, in the nine months of FY21 it made an EBIDTA profit of ₹104 crore at a 12.4 percent margin. If this was demerged not only would it get a poor valuation in the market, its profits could only be invested post payment of tax.

The three businesses also help them ride out cycles. While demand in the packaging industry is secular, capacity addition is lumpy and so it tends to have a downward pressure on pricing. Four years ago the agri industry went through a down cycle and SRF didn’t enforce its pricing contracts.

Both Ashish and Kartik insist their newfound wealth hasn’t made any difference to their day-to-day lives. Both continue to be avid golfers. Ashish does let on that, “You’re a little relaxed when you go out and spend,” but beyond that their only access to SRFs strong run on the bourses has been an enhanced dividend payout. They’re focused on growing both the chemicals and packaging businesses and have put aside a committed capital to enter the fluoro polymers business. The next generation will only enter the business if they are competent, they insist. Else it will go the way of a professionally-managed board-run company. Father Arun Bharat Ram who visits office a day or two every week still continues with his hobby of playing the sitar every day, which he learned under maestro Pandit Ravi Shankar.

Tweets by @forbesindia
India blames a virus variant as its Covid-19 crisis deepens
To be tracked or not? Apple is now giving us the choice