IT services Q3 earnings: Five takeaways from the top companies 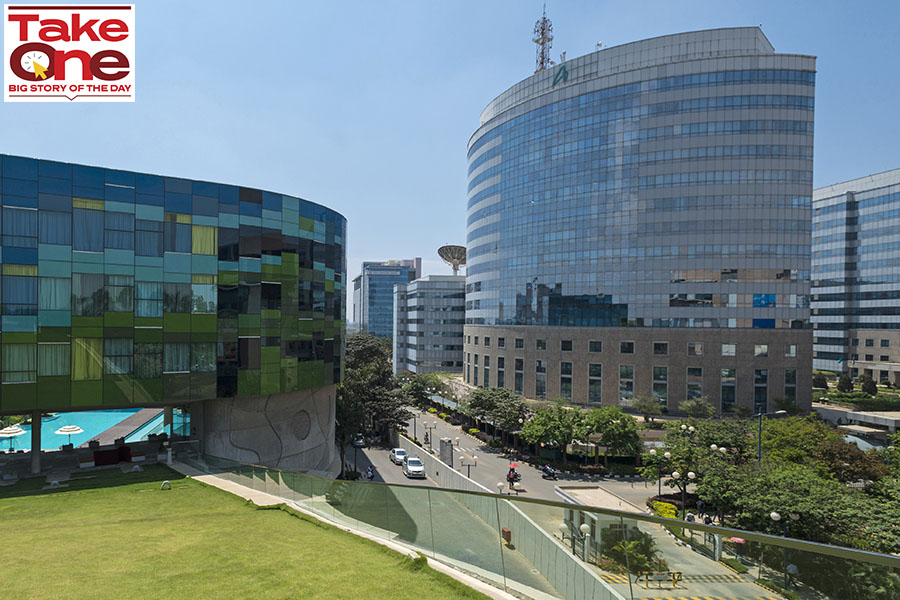 Part of the International Tech Park in White Fields, one of the IT centers in Bangaluru. Image: Frank Bienewald/LightRocket via Getty Images

India’s top IT services companies reported their fiscal third-quarter earnings last week, posting strong growth in what is generally seen as a slow period of the year due to the holidays.

The numbers, taken together with the commentary from the companies’ top executives, also show that an imminent slowdown is widely expected, with delays in spending decisions, even though the need for tech services remains strong.

Here are five takeaways as we head into 2023.

Infosys, India’s second-biggest IT services company, beat analysts’ expectations for its fiscal third-quarter revenues and profit, on the back of strong demand and adoption of its cloud services and automation solutions.

Revenue for the three months ended December 31, rose 2.4 percent from the previous quarter in constant-currency terms, which eliminates the effect of currency rate variations. Sales rose 13.7 percent to $4.66 billion for the December quarter versus $4.25 billion for the same quarter a year ago, Infosys said in a statement.
In comparison, analysts at Kotak Securities, for example, were expecting Infosys to turn in sequential growth of 1.1 percent and year-on-year increase of 11.6 percent in constant currency terms.

Infosys reported the biggest quarterly large contract haul in the history of the company, with 32 large orders, each worth $50 million or more over the life of the contract.

The large-deal orders won in the December quarter added up to $3.3 billion, an eight-quarter record. “This is the largest number of large deals in a quarter in our history,” Infosys CEO Salil Parekh said on January 12. More than a third of the large deals won were “net new,” at 36 percent, he said.

“Driven by growth of 17.8 percent in constant currency for the first nine months of FY23 and the strong large deal value for Q3,” the company increased its revenue growth guidance from the October range of 15-16 percent to 16-16.5 percent for the full financial year.

At top-ranked (by revenue) Tata Consultancy Services, quarterly revenues crossed the $7 billion mark. At $7.075 billion, sales rose 13.5 percent from the year-earlier period in constant-currency terms, according to a press release.

Orders won during the quarter are worth $7.8 billion, TCS reported.

In addition to cloud services, there was strong demand around cyber security, consulting and enterprise application services, TCS said in its press release.

During the quarter, TCS won or expanded orders from customers including AGL in Australia, BT Group, Rail Delivery Group and Marks and Spencer in the UK and Gilead Sciences in the US.

2. Indian IT companies are benefiting from clients looking to consolidate their vendors

“This is a seasonally weak quarter for us and amid a changing global economy,” Infosys CEO Parekh said. “We continue to take market share. We continue to benefit from consolidation.” Growth was broad-based with most industries and geographies growing in double digits in constant currency terms, Parekh added.

“We are seeing an uptick in vendor consolidation,” TCS CEO Gopinathan told analysts in a conference on January 9. The company’s ability to handle very large projects, offer “full services” and track record of helping customers recast their operations to get big savings is helping the company win such deals, he said.

“We have won quite a few such deals,” he said, in sectors including banking, financial services and insurance, health care, manufacturing and telecom and there were “many more” in the pipeline.

During the quarter BT Group, one of Britain’s biggest telecom companies, gave a new order to TCS to modernise its digital unit. TCS will manage and “ramp down” over 70 percent of the telecom provider’s older tech systems and replace it with a new “strategic technology architecture,” supporting the group's growth, Gopinathan told analysts.

“We are continuing to gain market share as a result of deepening client relationships and higher win rates” Wipro’s CEO Thierry Delaporte said in a statement on January 13. “Clients are turning to us to help them manage an evolving macro environment and balance their transformation goals with cost optimisation. Our ability to deliver on client objectives regardless of where they are in their cloud journeys is positioning us favourably in a consolidating market,” he said.

Wipro reported $1.1 billion in large contracts and a total of $4.3 billion worth of bookings during the quarter.

Staff churn, an important metric in the services business, continued to reduce during the quarter. At Infosys, voluntary quarterly annualised attrition came down by six percentage points sequentially to well below 20 percent for this quarter, CEO Parekh said.

At TCS, attrition was 21 percent on a last-12-months basis, compared with about 15 percent a year earlier. The trend has stabilised and is on a downward trajectory Milind Lakkad, TCS’s chief human resources officer, told reporters in a conference yesterday in Mumbai.

“Our quarterly annualised attrition on the other hand fell by nearly six percent in Q3, and we expect it to steadily trend down over the coming quarters.”

LTM attrition for Wipro and HCL Tech was 21.2 percent and 21.7 percent respectively, compared with 23 percent and 23.8 percent at the end of the September quarter.
“Our attrition moderated for the fourth quarter in a row,” Wipro’s Delaporte said.

While attrition has come down, the top IT companies are also being circumspect on hiring because of a combination of strong hiring in the prior quarters and the anticipated slowdown ahead.

Unlike Infosys or HCL Tech, TCS doesn’t provide a formal projection for revenue growth, but its staff additions and churn are among the numbers that are keenly watched, as proxies for both near-term demand and the state of the industry.

TCS saw a net reduction of close to 2,200 employees in its staff strength at the end of the December quarter, bringing the total to about 614,000.

The last time TCS saw a reduction in its workforce was around the time the world was beginning to be swept by the Covid pandemic. The company’s staff numbers decreased by about 4,800 employees during the April-June period of the year 2020.

Overall, a slowdown is apparent as we head into 2023, amid fears of recession in the world’s richest economies. TCS’s net addition in the first nine months of the current fiscal year was about 21,800 employees. In comparison, the company added more than 103,500 staff in the fiscal year that ended March 31, 2022, as demand soared for IT following the Covid pandemic.

For the rest of the current fiscal year, which ends March 31, 2023, Lakkad does not expect to add many more staff. At 42,000, the company had hired an unprecedented number of freshers (in the calendar year 2022), he told analysts in a conference on Jan. 9.

Fourth-ranked Wipro (by revenue) also saw its workforce decrease by a small number. Wipro’s workforce came down by 435 staff members to end the quarter at 258,744. Infosys added about 1,600 employees in Q3 and HCL Tech added close to 3,000.

In comparison, Infosys hired a total of more than 31,200 employees in Q1 and Q2 of the current fiscal year, and HCL Tech added close to 10,450 in the same six months.

5. A slowdown is imminent, and some tech spending will be delayed

While strong demand from customers was reflected in the December quarter’s revenue growth, India’s top IT companies are also expecting a slowdown and delays in spending decisions ahead.

“While we are encouraged by the immense confidence and trust our clients have in us, the signs around are showing a slowing global economy,” Infosys CEO Parekh said on January 12.

Some areas, such as mortgages and investment banking in the financial services industry, telecom, hi-tech and retail are more impacted and that is leading to delays in decision making and uncertainty in spending in these areas, he said.

Infosys is retaining its operating margin guidance for FY 23 at 21-22 percent. For Q3, Infosys reported operating margins at 21.5 percent, which was within the range CFO Nilanjan Roy had projected in October, roughly in line street estimates. He reiterated his expectation that Infosys will end the year with margins closer to the lower end of its estimate.

“Speed is varying by markets,” TCS CEO Gopinathan told analysts, in response to a question on decision-making with respect to deals focused on cost reduction. “I would say that in the UK, decision making is quite fast, customers are very clear, and there is a lot of action happening there.”

In the US, TCS’s business is normal and continues to be doing well, “but that does not account for the short-term aspect of that market,” he said.

In Europe, “decision making has significantly slowed down,” he said.

Overall, “everybody is a bit cautious for the time being, but we don't think that will last into next year,” he said, adding that customers’ budgets for the calendar year 2023 will also likely be delayed by “a couple of months.” There will be more clarity by April, he said.

“We see TCS and Infosys as key beneficiaries of this trend and they are our sector top picks,” Rakesh added, who has a “Buy” rating on the stocks.

The counter view is that “the pillars of demand strength in Q3 are unlikely to continue going forward with no visibility on growth from (TCS’s) regional markets or manufacturing,” write analysts Nithin Padmanabhan and Dhvani Shah at Investec Capital Services (India), part of the Anglo-South-African investment company Investec, in a January 10 note to clients.

The regional markets include markets such as India, parts of Asia Pacific (ex-Australia) and so on. Overall, the Investec analysts–who have a “Sell” rating on TCS–expect a “potential softness over the next two quarters.”

They see Infosys having better revenue visibility with “the only risk being delayed ramp-ups (of orders),” they wrote in a note on January 13, reiterating their “Buy” rating. Infosys’s margins also have tailwinds in FY24, they reckon, with room for improvement in utilization, meaning the proportion of the total workforce deployed on billable work.

Tweets by @forbesindia
What happened after the dust of the IPO storm settled?
ChatGPT: What is this new buzzword, and how it helps in academics