Fiscal discipline, sharp B2B focus and a string of buyouts have helped Razorpay grow at a furious pace. But will the RBI's digital lending norms queer the pitch for India's most-valued fintech startup? 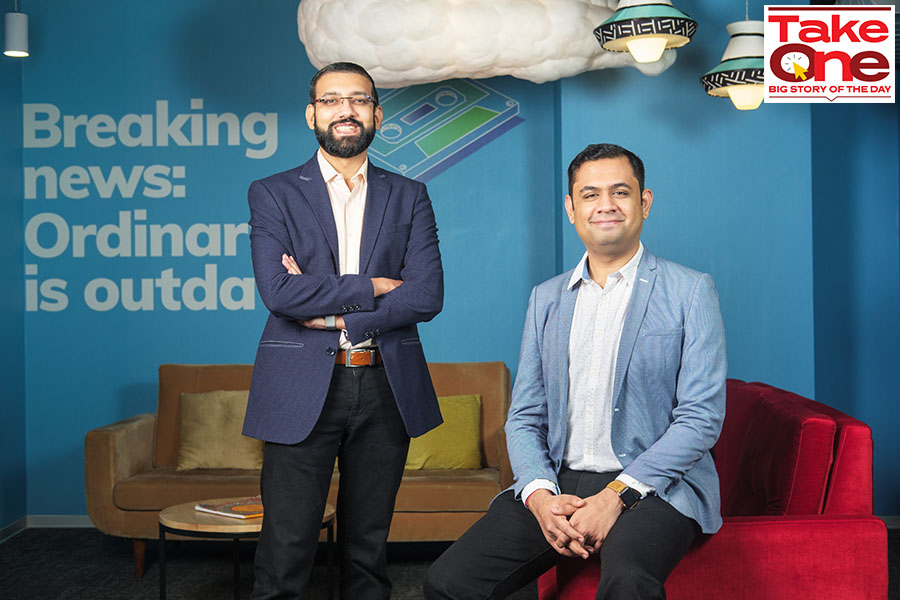 The offer sounded like a quintessential Diwali Dhamaka. Well, Harshil Mathur and Shashank Kumar can’t be blamed for thinking so. After all, who doesn’t want skyrocketing valuations and explosive growth? The logic apparently was simple. “Why don’t you guys enter BNPL [buy now pay later],” asked a curious investor last year. “Your valuation will immediately shoot up by at least 3x to 4x,” the funder underlined the new fad that had caught the fancy of venture capitalists (VCs) worldwide.

Started in 2014 as an online payments gateway for B2B ventures, Razorpay has had three rounds of funding till 2018—$2.5 million, $9 million and $20 million. The valuation, though, stayed undisclosed. In June 2019, it raised $75 million at a valuation of around $450 million. In terms of performance, the value was getting close to valuation: An operating revenue of Rs 193 crore and a loss of Rs 3 crore in FY19. “BNPL,” the investor underlined last year, “will give you heady valuation.”

Last year, indeed, was financially intoxicating. The market was flush with dollars, which meant loads of money on the table. In 2021, $32.3 billion was pumped in by investors in late-stage deals (series B and beyond) in India, according to Tracxn, a market intelligence provider of data of private companies. The comparative number for 2019, a non-pandemic year, was $8.8 billion. “Everybody is doing it. You guys must also think seriously,” stressed the VC, egging on the co-founders to join the party. Mathur and Kumar, who had scaled their payments and banking platform for businesses to Rs 841 crore and posted a standalone profit of Rs 6 crore in FY21, wondered whether they are missing out on the next big thing. “Should we get in,” was the question debated by the duo.

Globally, the answer was clear. BNPL was the flavour of the season last year. The transaction value for such payments leapfrogged from $34 billion in 2019 to a staggering $120 billion last year, according to GlobalData, a data analytics and consulting company based out of London. Back in India too, BNPL was making a lot of noise. Payments as a segment saw a massive spike in funding: $2.5 billion in 2019 versus $4.3 billion in 2021. “It’s always hard to resist such a temptation,” underlines Mathur. His partner chips in to recount similar kind of nudges to join the noisy bandwagon over the last few years. “There were times when we were grilled on why we were not building an online payment wallet for consumers or rolling out UPI,” says Kumar. At times, he lets on, it pays to play deaf and not get carried away by noise.

A year later, the co-founders are still steadfast in their approach and focus. “We don’t follow trends,” says Kumar. “And we will stay sharply focussed on B2B opportunities,” adds Mathur, sharing the standalone financial numbers for FY22. The operating revenue has jumped to Rs 1,481 crore, and the company has posted profit—Rs 9 crore—for the second consecutive year. Kumar, though, is quick to clarify the larger picture. “On a consolidated basis, we are yet to post profit,” he says. Razorpay Capital and Razorpay X, two more nascent revenue engines for the group, make up for under 10 percent of revenues and are incurring losses. The core payments business—Razorpay—though has been posting profits.

What has also helped the venture scale at a faster clip has been a string of buyouts. The maiden acquisition happened in August 2019 when Razorpay bought Thirdwatch, an artificial intelligence (AI)-powered company specialising in big data to reduce return-to-origin and fraud orders for e-commerce businesses. "It was a perfect fit as it helped in our war against cash," says Mathur. Fraud, he lets on, has been the albatross around ecommerce companies’ necks for the longest time. Thirdwatch, Mathur adds, empowers ecommerce businesses to digitally transform and disrupt by improving their response and redressal mechanisms of combating fraud. 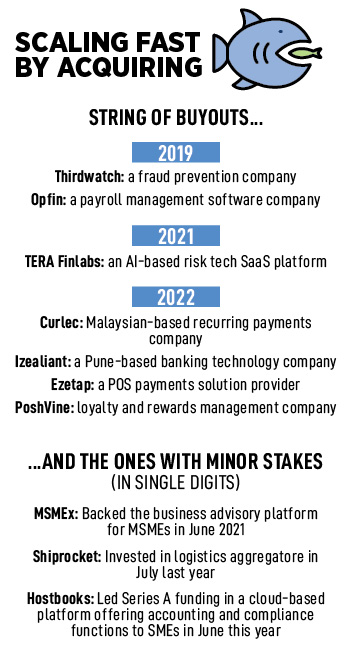 The second buyout—Opfin—happened towards the end of the year in November 2019. Kumar explains the trigger. “The startup perfectly fitted into our future roadmap,” he says. The big question for Razorpay, he lets on, is to consistently figure out different ways in which businesses could be served. One of the pain points was payroll management. Opfin, a cloud-based payroll management software firm, was a two-member company, had 15 to 20 customers and less than modest scale. The acquisition logic was unique. Acquisitions, stresses Mathur, are less about what exists today. “It is more about what we can build together tomorrow,” he adds.

In three years, Razorpay did manage to scale the venture. “Opfin experienced escape velocity,” says Kumar, alluding to the speed of growth of the payroll management software business. The firm, he claims, has thousands of clients and has scaled handsomely. Over the last three years, Razorpay has bought seven companies. Four of these, in fact, happened in 2022. (See box.) “The product, team and culture of the startups have to align with ours,” says Kumar.

The backers, meanwhile, are impressed with the growth story so far. “Though numbers are excellent, they don’t tell the full story,” reckons Ishaan Mittal, managing director at Sequoia Capital India. The VC firm first invested in Razorpay in series C in June 2019 and then followed it up with subsequent rounds in 2020 and 2021. “It’s rare for us to double down on our investments in such a manner,” he underlines, pointing out two traits of the fintech company that have helped them grow in a sustainable manner. First is Razorpay’s sharp focus on B2B. “They were neither cavalier in ignoring it [B2C opportunities] nor greedy in jumping into it,” he says. Second is the focus to build a full-stack payment platform for all kinds of businesses. “They swear by the massive unexplored B2B opportunity, and know how to make the most of it,” he says. “They are quite focussed.”

Also read: Vijay Shekhar Sharma Was Once The Poster Boy Of India's Fintech Revolution. Now It All Seems To Be Crashing Down

Despite a fairy-tale growth during the pandemic years, there are challenges for India’s biggest fintech player. One of the issues is navigating the regulatory maze. Early in October, the Enforcement Directorate (ED) conducted searches at offices of online payment gateway players including Paytm, Razorpay and Cashfree. The investigation reportedly was in connection to a larger probe into illegal Chinese loan app problems in the country. A Razorpay spokesperson clarified the issue. “It was a regular visit for an ongoing investigation on a few of our merchants by law enforcement about a year and a half back,” he underlined in an email reply. “We have promptly responded to those queries and the authorities were satisfied by our due diligence process. No funds were seized from Razorpay during this visit.” 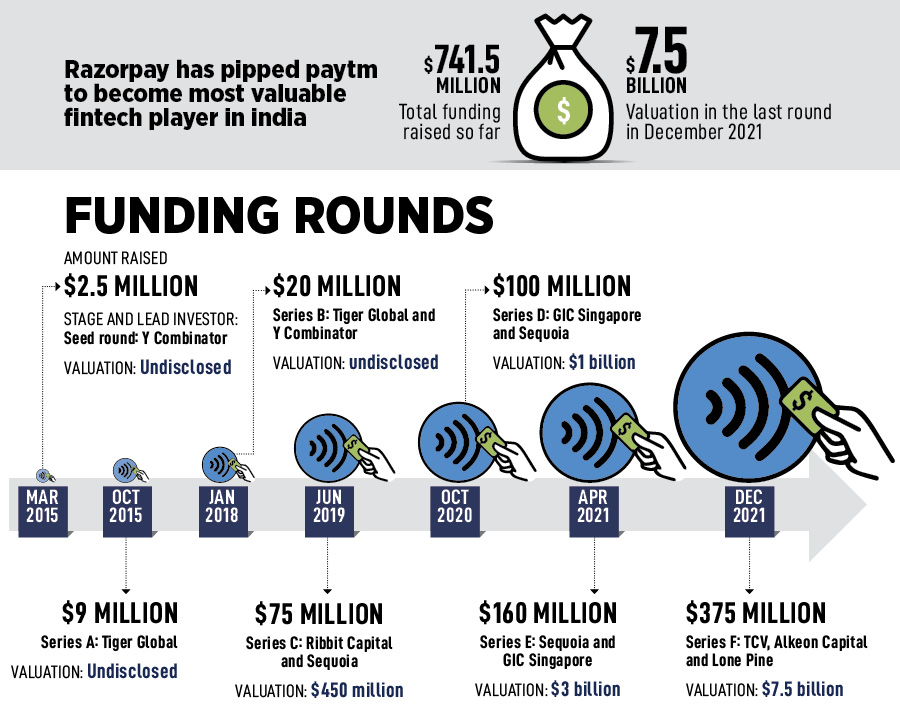 Another potential challenge for all fintech players, including Razorpay, could be Reserve Bank of India (RBI) guidelines on digital lending. The new norms surrounding a clutch of pertinent issues such as restricting third-party roles in the flow of funds to borrowers, consent, disclosure of costs and data privacy, will result in more regulations and streamlining of the segment. The co-founders of Razorpay, though, are not perturbed. The regulations, underlines Kumar, are a welcome move to drive customer-centric innovation and generate transparency in the ecosystem. “It will eventually lead towards building trust and growth of the fintech sector,” he adds.

The biggest area of concern could be maintaining a sustainable pace of growth. “We would like to hit the public market as a profitable company,” says Mathur, adding that the company is still two-three years away from an initial public officer (IPO). “We want to do an IPO as a full-stack financial services company,” says Kumar, adding that the public market is not averse to loss-making companies. “What they want is a clear path to profitability, and sticking to that deadline,” he says. “The key is having a sharp focus,” he signs off.