Four years ago, Anil Rai Gupta's Havells gate-crashed the consumer durables club by pocketing Lloyd. As it now trails behind the big boys, can the challenger brand step up its game? 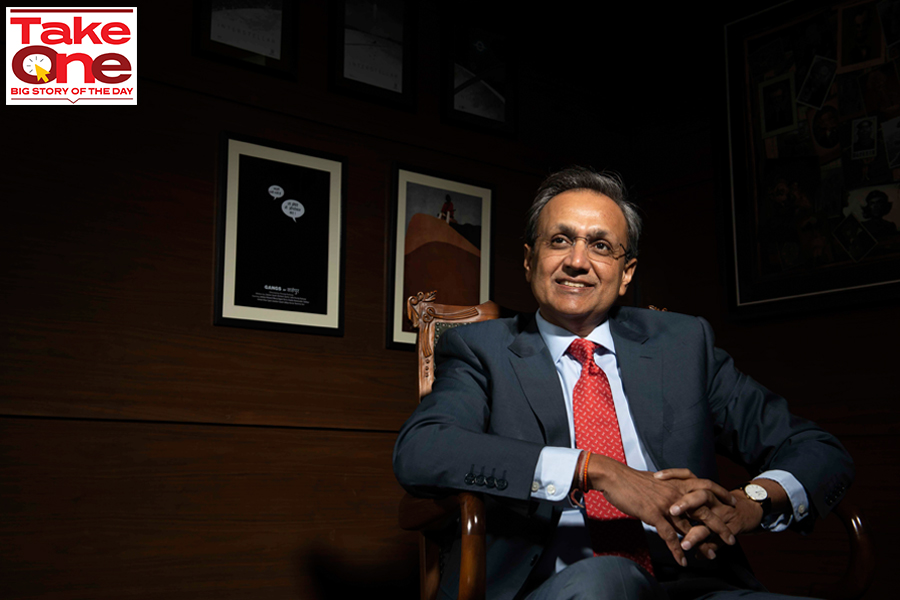 Though Lloyd, might have taken a little extra time in terms of performance, Anil Rai Gupta, chairman and managing director of Havells (top), says, it is firmly on the right path.

Anil Rai Gupta sounded quite euphoric during the Q4 earnings call this May. The chairman and managing director of Havells had all reasons to be. The peak summer started on quite a promising note for Lloyd, the consumer durable brand that was bought by Havells, reportedly for Rs1,600 crore, in 2017.

Lloyd, which had always been under intense scrutiny of analysts for being a drag on parent brand Havells, had posted three sequential quarters of growth after the pandemic-induced battering in the first quarter (April-June 2020) of last fiscal. The Q4 revenue of Rs591 crore, a 29 percent year-on-year jump, came on the back of heady sales during the preceding quarters—Rs 280 crore and Rs 512 crore in Q2 and Q3 of FY21, respectively. “We grew in a tough year. This is definitely a very positive step for Lloyd,” Gupta asserted. 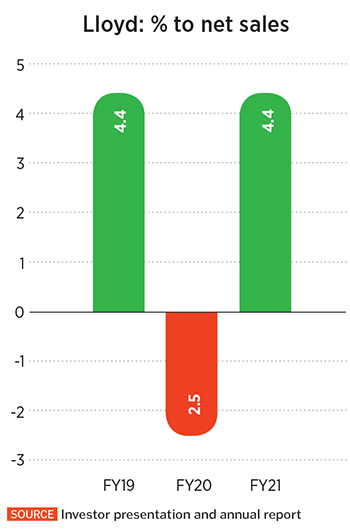 For Lloyd, ending FY21 at Rs1,689 crore as compared to Rs1,590 crore last fiscal, and posting a profit of Rs74 crore after a loss of Rs40 crore in FY20, was a huge positive. It meant that four years after joining the Havells family, the brand was finally finding its feet. What this also meant was that Lloyd, which had braved five quarters of pandemic disruption and GST headwinds in 2017, was all set to grow at a faster clip. Last year, the brand entered into the fridge category, making it a full-stack consumer durable player with a product range of AC, TV, washing machine, and fridge. “Our market shares in washing machine is in a low single-digit level. So we have huge opportunity to grow there,” Gupta pointed out to analysts.

With a glowing Q4 and FY21 report card, Gupta would have safely presumed that his four-year-old kid would be spared the rod. Wrong. The analyst community continued a close examination of Lloyd from a different lens. While Havells Q4 revenue grew a strong 50 percent year-on-year—industry watchers underlined—and the company continued to accrue market share gains from the unorganised sector in cable, wires and switchgears, Lloyd posted a two-year CAGR (compounded annual growth rate) of 5 percent. Compare this to the core portfolio of Havells, which reported a CAGR of 11 percent during the same period.

“Lloyd performed below our expectations,” Motilal Oswal pointed out in its capital goods sector update in May this year. Despite Lloyd’s full-year performance being fairly strong in terms of market share gains, the brand posted a sequential growth of just 15 percent QoQ (quarter over quarter) as against strong growth by peers such as Voltas and Blue Star going into the summer season, the brokerage report said. “Though Lloyd business has improved from the lows of FY20, it is still in a transformational phase,” it added, sounding a word of caution: Lloyd’s success holds the key to Havells’ premium valuation.

The brokerage house is not alone in its scathing remarks. The quarterly ritual of questioning the ‘muted’ performance of Lloyd culminated in a detailed report by CLSA in December 2019. Titled ‘Top 10 questions on investors’ mind,’ the institutional brokerage tried to address nagging issues by posing a set of questions to Havells’ management.

Havells, the report stressed, seems at a crossroads where successful —execution of Lloyds’ turnaround strategy could set it on a long-run growth path and address near-term investor concerns. One of the investment risks mentioned in the report pertained to Lloyd: The inability to improve margins and scale up the smaller categories in Lloyd.

A year later in July 2020, Morgan Stanley too made a similar assessment. “We view Havells' core electricals portfolio as a cash cow,” said the report titled ’FMEG: The marathon is beginning’. The consumer durables businesses—ECD (electrical consumer durable) and Lloyd—will drive stronger revenue growth from F22, the report predicted, along with a not-so-subtle warning of ‘strong competitive intensity in consumer durable business’. 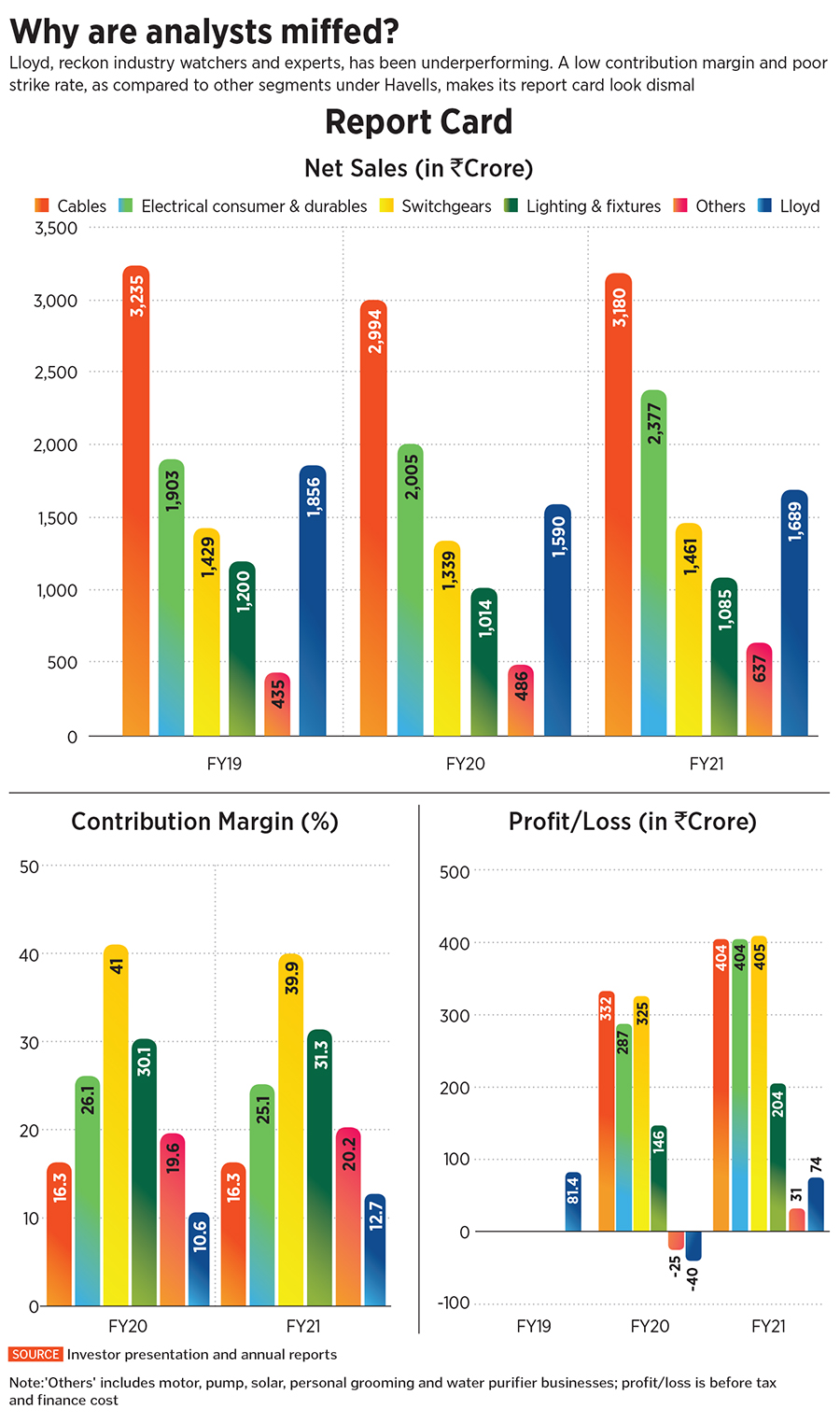 Back in Delhi, Gupta is miffed with the quarterly trial by fire. “We cannot change strategies every quarter. It's very important to have a long-term strategy,” he says, explaining what went wrong during the initial part of journey. Post-acquisition, Lloyd was disproportionately dependent on imports for all its product categories. An increase in customs duty and weakness in the Rupee resulted in increased product cost both in absolute terms and relative to competition during the first few years. Add to it the turmoil in the LED TV industry, where a bunch of foreign brands flooded the market with cheap products, triggering substantial price corrections. As a relatively smaller brand for TVs, Lloyd—which once had TV reportedly contributing 20 percent of the revenue—was impacted significantly. 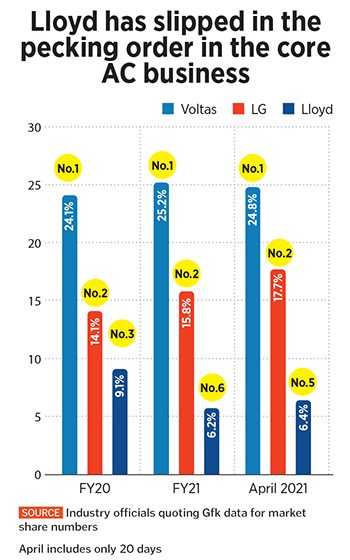 First, it got a makeover from an economy to mass premium brand. “It was a price-oriented brand, with limited features,” he says. Second, the brand flourished purely on sourcing. Over the last two years, Gupta claims, Havells invested around Rs400 crore in setting up a manufacturing facility for air conditioners. Third, Lloyd was a distribution-oriented brand, which was not present across modern format stores like Reliance Digital, Croma, or regional retailers like Vijay Sales. “We converted it from a distribution-oriented category to an omnipresent brand,” he says. From 100 percent in 2017, distribution-led contribution to sales has slipped to 55-60 percent today.

Fourth, the brand started focusing on an in-house design and R&D team. “Today, everything, including refrigerators, AC, and washing machines, are designed in-house,” Gupta says, adding that every year, Havells spends over Rs100 crore on Lloyd. The four-year journey, Gupta explains, focused on manufacturing, brand positioning, revamping, and product innovation. “We know it's a long-term investment,” he says.

The industry watchers, for their part, have their own reasons to be alarmed. First, Lloyd is slipping in its core business of AC. From being a strong No 3 and a market share of 9.1 percent in FY20, Lloyd ended FY21 with 6.2 percent, pushing it down the pecking order to No 6. During the same period, top two players—Voltas and LG—managed to hold on to their dominating share.

Reclaiming the lost ground in ACs, which still contributes 70 percent to Lloyd’s revenues, won’t be easy. Reason: A shift from economy to mass premium brand positioning. VS Kannan Sitaram, partner at venture capital fund Fireside Ventures, explains the dilemma of Lloyd. A brand has two ways to make a mark in a highly branded and competitive consumer durable market: Either play on features or be a price warrior. Lloyd, he explains, was known to be a functional brand. When you add features to it, there comes the first disconnect. This pitches Lloyd against a bunch of bigger rivals who consistently lead on the innovation front. The premium pricing or positioning of a brand is not based on any factor except features. “People compare and then take a call,” he says. So if a brand is not ahead on the feature front, it can still win if it is a price warrior. “Lloyd is neither here nor there,” he says.

Another problem for Lloyd was the hyper-competitive nature of the white goods market. “Havells’ earlier learning of acquiring brands and then scaling is of no use in this segment,” says Ankur Bisen, senior vice president (retail & consumer products division) at consulting firm Technopak.

High-brand awareness among consumers, a differentiated retailing channel as compared to electrical goods, deep entrenched big players and a low-margin business is something that usually deters new players to enter into the category. Being a largely AC-focused player, which recently forayed into fridge, a fringe player in washing machine and in midst of high churn in TV business that is no longer its focus area, investors have all the reasons to be jittery.

An investment banker points out another reason behind investors’ nervousness. A company that has for years got used to hefty margins—switchgears’ contribution margin is as high as 41 percent—Lloyd pales in comparison: 12 percent. When one adds the profit posted by the consumer durable business—Rs 74 crore in FY21 as against a loss of Rs 40 crore in FY20—one gets to see why consumer durable business can be a cruel game. “In washing machine and fridge it doesn’t even have a sizeable market share,” the investment banker points out, requesting anonymity.

Now with TV losing focus, the pressure mounts on the AC business. There was another strategic blunder, though. Direct cooling makes up over 70 percent of fridge market in India. Similar is the case with semi-automatic washing machine, which forms the dominant chunk of the segment. “Lloyd should have focused on these two sub-categories rather than spreading itself too thin,” the banker says, adding that Havells is now fighting on multiple fronts. The core business of wire, cables and switchgears, along with fans, is facing tough fight from incumbents such as Bajaj and Crompton as well a new set of players like Polycab and Kei.

Gupta, for his part, wants to focus on the bigger picture. The headroom of growth in major consumer durable segments is massive. Take, for instance, fridge, where penetration in India is as low as 33 percent. While in washing machine, the number is just 12 percent, in ACs, it’s even lower at over 5 percent.

He predicts how Lloyd play will pan out over the next few years. While ACs will see their contribution come down a bit from 70 percent, washing machines and refrigerators will dominate, and LEDs will just remain a category filler. Though Lloyd, he concedes, might have taken a little extra time in terms of performance, it is firmly on the right path. “I am quite optimistic. In the next five years, Lloyd will be a very strong part of Havells,” Gupta asserts.

Tweets by @forbesindia
Photo of the day: See the red
Career highlights of Benjamin 'Bibi' Netanyahu, now the former prime minister of Israel