In eight years, Capillary Technologies has grown from a small customer relationship management software vendor to a multi-million dollar firm. Now, it's adding artificial intelligence to its retail solutions 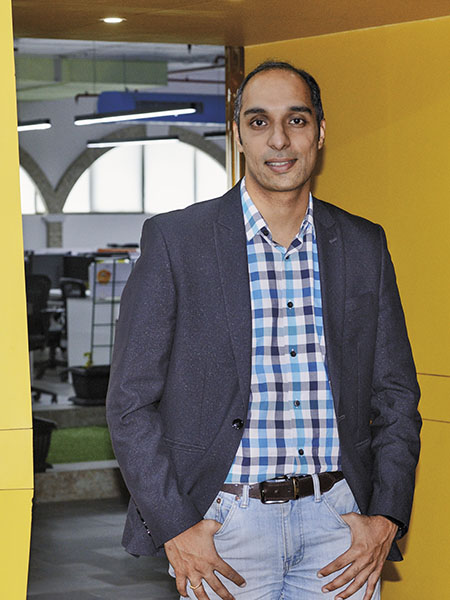 Imagine this: A woman walks into a store, say a clothes store, and the salesman gets a ping on his Bluetooth earpiece that the woman had bought a button-down shirt in mauve, size medium, two weeks ago at the store. The woman proceeds to browse through a section of formal jackets, and the salesman gets alerts about jackets that might go well with that mauve shirt, or ones that she might buy on impulse, based on her existing profile that an artificial intelligence (AI) engine can tap on the cloud.

That’s what Bengaluru-based Capillary Technologies, a cloud-based customer engagement and retail solutions firm, founded in 2008, is now working towards. “What we’re trying to do [using facial recognition, speech recognition and other technologies] is create the clickstreams and cookies for the offline world,” says Aneesh Reddy, CEO and co-founder, 33. “Like how a website would do, right? You visit a website a second time, it tries to show you something relevant, based on data from your previous visit.”

Walk into any of VF Corporation’s brands store in India to buy your favourite Lee or Wrangler denims and you will probably be part of such an effort, where Capillary Technologies has just deployed a computer vision-based software to help the retailer better understand consumer traffic and buying patterns.

An in-store traffic reckoner is the first commercial piece in their larger vision of bringing AI to level the playing field between physical stores and online ones.

VisitorMetrix, the traffic counter solution, uses computer vision and machine-learning algorithms to differentiate between store staff and customers, help brands analyse historical store traffic patterns (to determine, say, staffing requirements), as well as give more immediate “responsive data” to changes, says Ganesh Lakshminarayan, COO at Capillary. For example, it can help study the impact of promotional campaigns: Whether a customer to whom an email promotion was sent, perhaps with a discount coupon, visited the store over the next few days.

VisitorMetrix’s deployment can also be extended to malls to analyse the effectiveness of their layout and understand crowd circulation better, Lakshminarayan said in a press release on October 8, announcing the launch of the solution.

Capillary was co-founded by Reddy, along with Krishna Mehra and Ajay Modani, both of whom left in 2015, cashing in their holdings to start their own ventures. The trio initially built a simple mobile-based customer relationship management (CRM) software that was a hit because it impacted same-store sales: 70 percent of consumers who were offered loyalty programmes signed up by giving their mobile numbers, Reddy recalls. They went on to build analytics and campaign products—to catch the attention of consumers who hadn’t shopped at a given retailer for a while, for instance—and a technology platform to help retailers do everything in one place.

The CRM software has about 300 clients among the big brick-and-mortar retailers in India and many in the rest of Asia as customers. These include names like Biba, Walmart’s India business called Best Price, Madura Fashion and Lifestyle, Arvind Limited, Pantaloons, Landmark Group, Pizza Hut, and brands such as Puma, Nautica, Tommy Hilfiger, and United Colors of Benetton.

Supermarket chains such as More, Vishwanath Megamart, Spar Hypermarket and others too are customers. Gross margins are at 65 to 70 percent, and Capillary is aiming to hit $50 million in revenues next year, growing at about 80 percent over the current fiscal. VisitorMetrix, so far, has one client in VF Corporation, which has implemented the software in 300 of its stores in India.

In addition to Capillary’s effort at being an early mover in its effort to bring AI to offline retail CRM, one thing that sets them apart is the focus on India and Asia. This itself is a $2 billion market for the type of products and services that Capillary is offering, says Reddy, so, there isn’t an urgent need to try and sell in the US. Today, the India versus rest-of-Asia ratio for revenue breakdown is about 1:2. Reddy expects that to shift to 1:4 in the coming years.

Further, “CRM in the B2B space is a solved problem”, he says, referring to the volume of such software used by large corporations selling to other large corporations. In the case of retailers selling to millions of individual consumers, there is still plenty of opportunity to solve big and interesting problems, he adds. And accurate, unobtrusive, but effective personalisation is at the top of that list.

Computer vision entails feeding digital images to algorithms that will file them away, attaching all sorts of tags to them that will help bunch them up based on shared characteristics and so on—demographics, for instance, or gender, or all buyers who share striped shirts or what have you.

In practice, this works not by storing actual images on the cloud but the underlying metadata, a technical summary of all aspects of the image. This means the next time a customer walks into a store, facial recognition will kick in by comparing a real-time facial scan with the stored metadata.

This, in turn, can tap into Capillary’s existing CRM software and provide the store staff a composite view of the customer who has walked in, what he likes, when he last made a purchase of that brand, as well as his online purchase history at the brand’s ecommerce site. One reason VisitorMetrix can do this, currently with over 95 percent accuracy, is that the company has purchase data from hundreds of millions of consumer transactions accumulated over the last eight years, says Subrat Panda, a principal architect with Capillary, who has a PhD in computer science.

With the rise of mobile internet and ecommerce, “the consumer today is evolving faster than the brand, and our promise today is to bring the clients up to speed with their consumers,” adds Panda, who is leading the company’s engineering push into AI-based solutions.

VisitorMetrix is seen as the first step towards realising the bigger idea of Instore Vision, the AI and machine-learning solution that Capillary is building, which will feed on data from computer vision, speech recognition, sales staff interactions, customer care call recordings and so on.

Among the things Instore Vision will do is feed information to an automated virtual assistant that will help sales staff in real time. In physical stores, “there’s research to show that the interaction with the store staff is the most influential part of a consumer’s decision-making journey,” says senior product manager Rohan Mahadar. Instore Vision will also help store managers to better use store staff, plan merchandise and store layout, and so on.

For business managers, Capillary has also built aiRA—short for Artificial Intelligence-powered Retail Assistant—which cuts through the clutter of unwieldy spreadsheets and gets to the insights straightaway, says Anjali Kumari, director for new products at Capillary.

The idea is to automate the generation of information that business managers at retail brands can rely on, adds Kumari, who has a master’s degree in computer science and an MBA from Indian School of Business. “What we’re looking at is the convergence of online and offline experience for the consumer. Brands are now adopting ways of engaging their customers in a multi-channel form.”

Small Beginnings
“We started during a recession,” Reddy recalls about how Capillary was incorporated a month after the Lehman Brothers crash in 2008 that set the global financial crisis rolling. He and Mehra had no entrepreneurial experience other than that of setting up the Entrepreneurship Cell at Indian Institute of Technology Kharagpur, from where they graduated in 2006.

After about two and a half years at ITC Ltd, Reddy was ready to take the entrepreneurial plunge, and Mehra, who had spent two years at Microsoft, joined in. They went back to their professors at IIT, and got about ₹15 lakh to get started, in return for a 3 percent stake in the venture. This was from the ₹5 crore that the Entrepreneurship Cell had been set up with, to support new ventures by alumni members. Modani, the third co-founder, joined them about a month into the start of the company.

Of the roughly $80 million that Capillary has raised thus far, about half has been through secondary stake sale, which helped its early investors, including all the angel investors and also many employees, make some good money. This was also how Modani and Mehra exited.

In the most recent funding round that Capillary has made public, the company raised $45 million in September 2015, comprising $40 million from Warburg Pincus, which made the PE firm the largest stakeholder in the company, and another $5 million from Sequoia and others.

The funding valued Capillary in the range of “a couple of hundred million dollars,” says Reddy. It also helped Capillary make some useful acquisitions, including MartJack, which helps retailers get an ecommerce presence with their own online storefronts (see table).

There was “a customer base with a clear unmet need”, that Capillary was effectively addressing, says Vishal Mahadevia, managing director and co-head of Warburg Pincus in India. Since then, “Aneesh has successfully strengthened the core Capillary product and bolstered the company’s product suite, both through acquisitions and organic development.”

Capillary is yet to break even, but that is more from expanding business into new promising areas, Reddy says—both into new markets in Asia, such as China, where the Bengaluru company now has a team of 20—and into new products. The idea, he says, is to “release a couple of products every year for the next three to four years.”