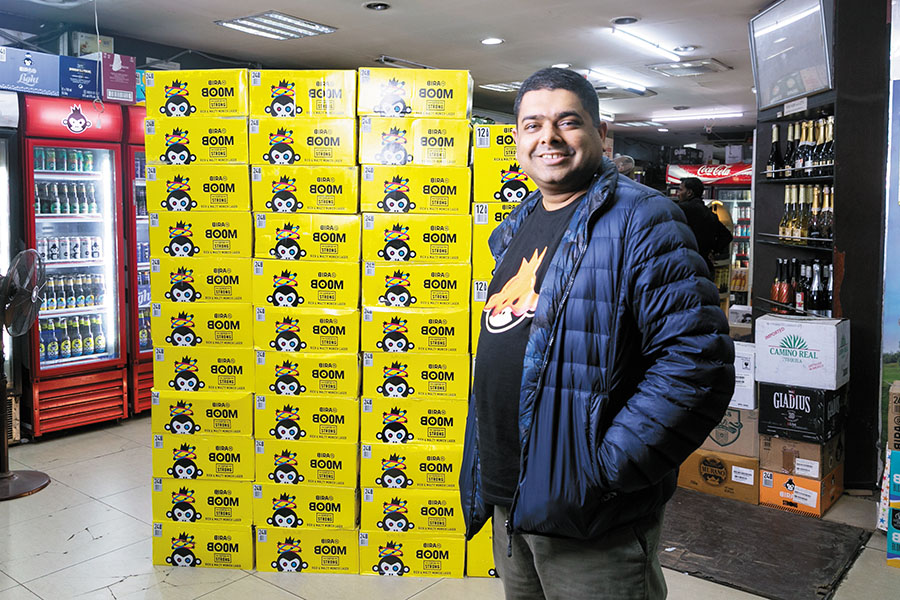 On Christmas eve, around 2.30 pm, Channegowda was about to make a bold move. “Onedu strong beku (give me a strong beer),” requested the 32-year-old electrician. The retailer stared back. “Are you inspired by Virat Kohli?” he asked, alluding to the huge billboard of the Indian cricket captain that greets consumers at the Sri Kalikamba Wines Store in Baburayanakoppal village, some 130 km from Bengaluru. The hoarding of Royal Challenge sports drinks, endorsed by Kohli, flashes the brand’s signature message: Make a bold move. “Virat strong beda, bunder strong beku (I don’t need Virat strong. Give me monkey strong),” Channegowda replied, pointing to a bottle. “It’s Boom and has a quirky monkey head,” his friend chipped in, who induced Channegowda into shunning his old beer brand. “Idu tumba tasty mattu strong (This is different, tasty and strong),” he insisted.

Another 40 km from Baburayanakoppal is Kwality Spirits, a wine retail shop that has a singular distinctive identity: A massive advertisement of Knock Out, a beer brand owned by SABMiller. Lokesh, a painter, is enjoying a chilled beer in a steel glass. “Beer mugs are for the cities. Here you get the monkey drink in a glass,” he says, pointing to a bottle of Boom, a strong beer brand he got hooked on to six months ago. “It gives me a kick,” he says. “Welcome to Karnataka. It’s Boom time,” says Vikash Bakrewala, division director (south) of B9 Beverages, the maker of Bira 91 and Boom beer. “We have just started. The pace and the reach are set to accelerate,” he says. Bira 91 got 60 percent of its sales from Tier II cities and beyond in the last two quarters of 2019 compared to 24 percent and 40 percent in 2018’s corresponding quarters. From 159,766 cases of Boom—its strong beer brand launched last February— sold in the first quarter of last year to 607,367 cases in the last quarter, the monkey jump has been staggering.  With over 85 percent of the beer market in India dominated by strong beer—with alcohol content between 6 percent and 8 percent—Boom is helping Bira 91 make a transition from a craft beer brand to a player that’s getting most of its growth from smaller cities and towns. What Boom has also done is enable Bira 91 to expand aggressively—from 56 cities at the start of the year to 386 cities now—and become the fifth biggest beer maker in India with 2.7 percent value market share. For a brand that began its innings in February 2015 in Delhi, the journey has been phenomenal: From a paltry gross revenue of ₹50 lakh in fiscal 2016 to striking a run rate of ₹700 crore for the financial year that ends in March 2020; from a presence in 60 outlets to reaching a little under 29,000 by end-March; and from selling in one country to now being present in 16. 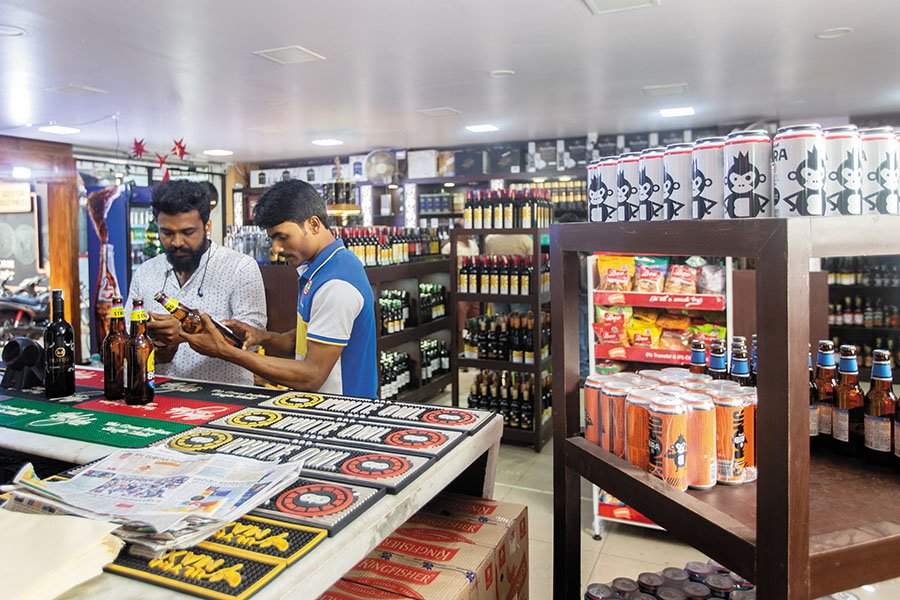 
In Delhi, the success of Boom has whetted the appetite of Ankur Jain. “We are soon going to be in 20 states. This is the power of Boom,” says the founder of B9 Beverages. Boom, he lets on, was the primary reason for the tremendous growth in 2019 even though the industry was in the throes of a slowdown. While Bira 91 managed to grow at a brisk pace in the premium markets of top cities—its biggest is Delhi and second largest Bengaluru—Boom helped it make massive inroads into the hinterland. “We have been able to penetrate really deep into Bharat,” says the founder.  Jain is now brewing a heady plan. “Revenues have jumped brilliantly and so has our ambition,” he says. The target is to become the beer of choice for consumers. For a company that had a modest aim of selling across just 30 pubs in Hauz Khas in Delhi in February 2015 to becoming the fifth biggest and now wanting to break into the top three, the quantum jump in aspiration is striking. “We are a refreshingly modern brand as opposed to traditional,” says Jain, who once identified himself and the brand with craft beer. “I can’t sort of deny the fact that that’s where the journey really started,” he says. Tradition, Jain explains, has not been on his side. “We are rooted in modernity.”    Ironically, it’s the tradition of the beer market in India, which has historically skewed towards strong beer, that is helping Jain make the most of Boom’s success. The modern element, though, is that the beers are not plain vanilla. They are flavoured. “This generation loves flavourful beers,” he says. 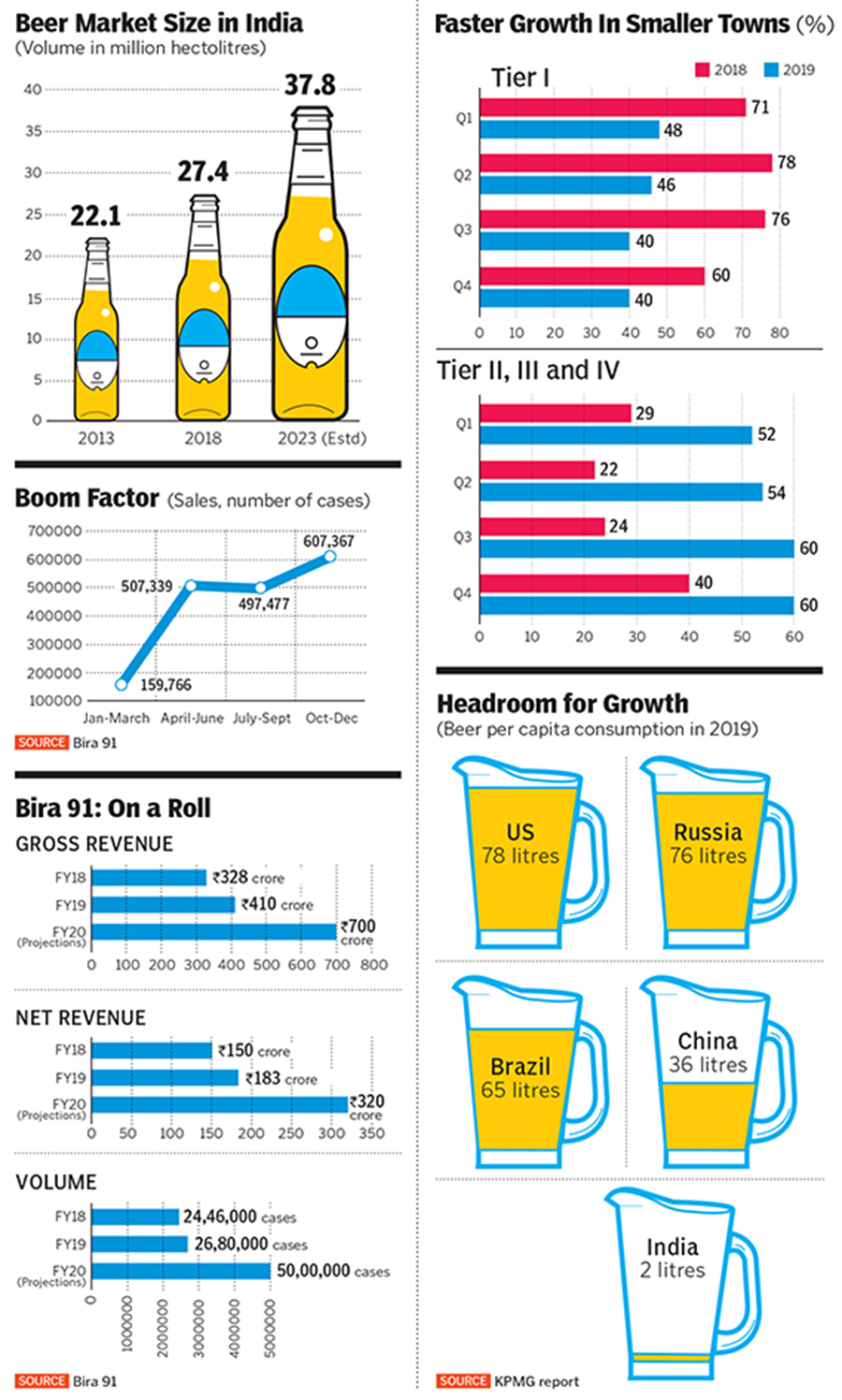 Non-metro India is getting a hang of strong flavoured brew. “Tier II and beyond is where the action is,” says Rahul Singh, founder of Beer Café, a chain of beer bars. “Drive 10 km away from any city and the world of beer transforms. It is value for money and gives a better kick for the buck,” he explains, adding: “Bira 91 seized the opportunity.” The strong beer market, reckon analysts, was also ripe for disruption. Over the last few decades, the alcoholic beverages segment has been bereft of innovation, says N Chandramouli, chief executive officer of brand insights company TRA Research. While there has been a dramatic shift in the openness among consumers to experiment, the bigger and older players stuck to the tried-and-tested course. “Boom is likely to give a stiffer fight to the oldies who have ruled the roost for long,” he says. Demographics and beer statistics, too, are loaded in favour of any challenger brand that dares to innovate. While an estimated 25 million turned 21 in 2019, 30-odd million will be of drinking age that most states allow by 2024. The per capita consumption of beer in India stands at a low 2 litres compared to China (36 litres), Russia (76 litres) and the US (78 litres). “The headroom for growth is massive,” says Chandramouli.  The David of the Indian beer market is taking on the Goliath. Given Kingfisher’s market share—over 50 percent—the only way for Bira 91 to grow is either to capture new markets —millennials—or go head-on. “Bira 91 is doing both,” says Jessie Paul, founder of Paul Writer, a marketing advisory firm. Lighter, more expensive beers would restrict Bira to the urban, millennial market that can afford them. Boom exploits an understanding of the Indian preference in both taste and pricing, she adds. Investors in Bira 91, too, are happy with the shift from the craft beer theme. “Today Bira 91 is not just a reimagined craft beer brand for a niche market,” says Sakshi Chopra, principal at Sequoia Capital India Advisors, an investor in B9 Beverages. It is also an aspiring pan-India brand that appeals to consumers across price points and age groups. “We backed a disruptive and innovative brand in an otherwise-fairly-oligopolistic market,” she says, adding that Bira 91 has forced some of the large incumbents to sit up and take notice.

What has made them react is the pace of the growth of the premium and super premium segment. From 0.8 million hectolitres in 2013, the volume pole-vaulted to 2.4 million hectolitres in 2018 and is pegged to almost double in three years, which in value terms would be equivalent to $2.7 billion. Last month, United Breweries (UB), India’s largest brewer, launched Ultra Witbier, its first non-lager beer, in Karnataka and Goa. Ultra Witbier 330 ml is priced at par with Bira White and Simba Jungle Wheat in Bengaluru. Last year, UB added a non-alcohol variant called Radler under the Kingfisher brand. Last October, AB InBev—the world’s biggest beer maker with brands such as Budweiser and Corona under its belt—inked a deal with The Indian Hotels Company Limited to launch a chain of 15 microbreweries over five years to sell craft beer. It also plans to invest ₹1,000 crore into its Indian subsidiary. In 2015, AB InBev acquired SABMiller for $107 billion, but it took it over two years to complete the full acquisition of the British-South African beer maker. Last year, the Belgian-Brazilian brewer launched Budweiser 0.0, a non-alcoholic beer in India. Though the fight is getting intense in the premium segment, Jain is focusing on the mass (strong beer) market. “We have an opportunity to define what beer means for this generation,” he says. The redefining journey, though, has had its fair share of mistakes and learnings. In fact, the brand had a near-death experience after a heady summer of 2016. “We became a victim of our own success,” recalls Jain. The company couldn’t predict the overwhelming demand. In the business model pitched to Sequoia for funding, the company had done its math on the assumption that it would be able to sell one case a week or four cases in a month at least. B9 Beverages ended up selling 500 cases a month. Poor anticipation in demand was made worse by a rickety supply network. While the company was initially dependent on imports, transition to domestic production was set to start by early 2016. It didn’t happen. While an agreement with a supplier in Rajasthan feel apart, an Indore plant—which was scheduled to open by April 2016—got delayed by six months. “The entire season was gone. It might well have been the death blow. It was a painful period,” says Jain, sharing his biggest learning: The need to have a five-year strategic plan rather than quarter-on-quarter execution. “We decided to expand our capacity,” he says. B9 Beverages now has four plants; the most recent one in Mysore started shipments a month back. The second mistake, Jain says, was in delaying the foray into Tier II and beyond markets. “I had this bias of a south Delhi kid that outside Delhi, Mumbai or Bengaluru there are no takers for great products,” he says. The faulty assumption delayed the expansion plan. “Had we started a year earlier, we would have been in a much better position today,” he says. What spoils Bira 91’s report card are its mounting losses: From ₹12.32 crore in fiscal 2016 to ₹202 crore three years later. Jain is keen to fix the problem. In the beer world, one needs to have a long-term approach to business. “And this can’t be driven by consistent losses over multiple years,” he says, adding that the company plans achieve breakeven at the Ebitda level by fiscal 2022. What keeps Jain on his toes is a four-letter ‘F’ word. “Fear of failure is constant. The larger the business, the bigger the fear,” he says.