How craft beer brand Simba plans to take on the giants

Born in 2016, the fledgling craft beer brand clocked ₹125 crore in revenue in the third year of operations. The target now is to double it in a year 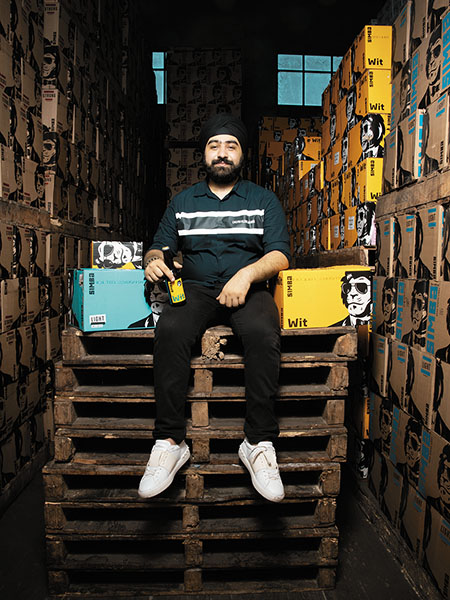 Mufasa always had dollops of wisdom for Simba. Prabhtej Singh Bhatia, who first saw Disney’s animated film The Lion King in 2000, can still vividly recall most of the endearing conversation between the father and the son.

Closest to Bhatia’s heart, however, is what the ageing king tells his cub: Time as ruler, he says, rises and falls like the sun. “One day, Simba, the sun will set on my time here, and will rise with you as the new king.”

The lines left an indelible imprint on 10-year-old Bhatia, who was born into a family that has retailed and distributed liquor since Independence. 1947 was also the year his grandparents migrated from Pakistan to Dongargarh in the Rajnandgaon district of Madhya Pradesh; his grandfather used to cycle over 60 km every day to sell liquor. By the 1980s, the Bhatias had become the biggest liquor retailer in the state.

Cut to 2009. The youngest Bhatia enrolled in Exeter College in the UK to pursue a degree in business economics. His father Baldeo Singh Bhatia dished out an emotional, yet prophetic, sermon at the airport. The day you are back, the sun will set on my time here, and will rise with you, he told his son, evoking memories of The Lion King. He was alluding to the plans of diversifying from liquor retail to contract manufacturing by setting up a world-class brewery, a first in Chhattisgarh.

By the time Bhatia was back from the UK in 2012, construction of the brewery was in full swing in Durg. In 2014, the plant was commissioned and, over the next two years, 80 percent of the capacity was used for contract manufacturing for English brand SABMiller (which Anheuser-Busch InBev of Belgium acquired in 2016). Bhatia now decided to take a leap of faith by starting his own craft beer brand, a move that was shaped during his stint in the UK. His father backed it, the family exited the retail distribution venture, and the contract manufacturing business for SABMiller was shuttered. From the host of names suggested for the new brand—Pasha, Seahorse, Mufasa, Jungle, Bullet—Bhatia picked the one that best described his relationship with his father: Simba.

Born in 2016, the fledgling craft beer brand clocked ₹125 crore in revenue in the third year of operations. The target now is to double it in a year. “The aspiration is to make Simba India’s biggest in a decade,” says Bhatia, adding that his family now does contract manufacturing for Carlsberg, only for sale in Chhattisgarh.

Beer’s Maggi Moment
The state with the third largest forest cover in India taught the Bhatias some valuable lessons in business. “You can get lost in a forest. So one needs to be focussed while navigating,” says the third-generation scion. The move to exit liquor retail and distribution was not easy. “But it was critical to keep the focus on the beer business,” he adds.

Though the family ended its contract business with SABMiller in 2016, two years of working for one of the biggest companies in the world proved to be a huge learning experience. “They instilled brutal discipline in us,” says Bhatia. Even a minor digression in any of the key performance indicators, such as the amount of water used or electricity consumed in the process of brewing, was heavily penalised. “There was no room for error,” he adds. The two-year window—from 2014 to 2016—was also used to explore and learn the craft of brewing across the world.

Bhatia’s educational stint in Britain brought in another perspective: Beer has to be distinctive. India, the 27-year-old says, is largely a market where beer is a commodity. “Every beer brand tasted almost the same,” he says, adding that while globally beer accounts for three-fourths of consumption of alcoholic beverages, in India it’s under 30 percent. The taste gap was an opportunity as well as challenge. “Among noodles, Maggi stands out. No other brand can taste like Maggi,” points out Bhatia.

Simba was the Maggi moment for him. The taste was perfected, craft of brewing was mastered at the state-of-art brewery, and a well-oiled distribution machinery deployed to overcome the challenges faced by an unknown brand. The results were dramatic. Simba clocked a revenue of ₹32 crore in the first year; in the second year, it doubled to ₹76 crore. The next year, the number jumped to ₹125 crore. As Bhatia says, “Establishing a presence across 14 states in three years is not easy.”

While India is ranked 13th among beer consuming countries, it doesn’t  figure among the top 20 in terms of per capita consumption. “Craft beers make up less than 1 percent of the entire beer consumption in India,” contends Bhatia. The fact that Indians in their 20s and 30s were developing a taste for craft beer helped push sales.

A demographic shift in India took place in conjunction with a slew of other factors: A rise in disposable income, a perceptible change in attitude towards alcohol consumption, which brought in a wave of women consumers, and mushrooming of pubs and eateries across the country. “The ingredients made for a heady brew,” says Abhik Choudhury, founder of brand consultancy firm Salt and Pepper. The new-age beer drinkers need lighter beers with experimental flavours.

What helped make the brand popular outside its home state was its accidental association with Simmba, the Ranveer Singh-starrer. The producers of the movie had run into legal trouble late last year with the Bhatias for allegedly infringing on the ‘Simba’ trademark. Though the Bhatias went for an out-of-court settlement and licenced Rohit Shetty Picturez to use the trademark, the association did wonders. “When you don’t have money to advertise, God creates an opportunity for you,” grins Bhatia. The cast of the movie came to Raipur, Ranveer Singh visited the house, and the news spread like wildfire. “People thought we have produced the movie,” he says.

The real challenge for the brand, though, lies in expanding outside its state. While Simba’s biggest market is Chhattisgarh, it has a minuscule presence in Bengaluru, India’s craft beer hub, as well as Delhi and Mumbai. If they want to play at the big table, they need to start working on winning these forts, reckons Choudhury of Salt and Pepper. “The main war is in metros, where deep-pocketed rivals such as Bira 91 rule the roost,” he says.

Bhatia is in no hurry. “I laugh in the face of danger,” he says, parroting a dialogue from The Lion King. The beer brand, he maintains, is experiencing a decent pace of growth despite regulatory challenges. Perhaps the time for the new king is here.