Super 50: The formula that makes these companies 'super'

When Forbes India launched its Super 50 list in 2015, the key question in our minds was: What is it that makes a company ‘super’? Sure, there are several definitions of excellence and many companies will fare very well on most of these. After much internal debate and discussion, and with assistance from our Knowledge Partner PwC India, we decided on three key metrics—shareholder value, sales growth and return on equity—which would give us a holistic view of corporate performance; a 360-degree evaluation of sorts and that too over a three-year time frame to ensure consistency. The Super 50 list is not a ranking, but a listing of companies which have performed excellently on these three counts, and delivered stellar performances as a result. 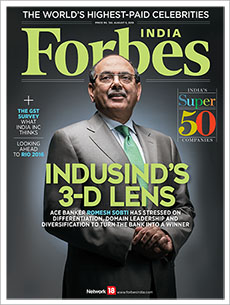 Despite the diverse nature of the firms on the 2016 list, there are some common elements which characterise these super companies. Efficiency of capital, the obsessive desire to stay differentiated from the clutter, the need to keep the customer at the centre of all they do and a keen eye on profitability bind this disparate group of companies. For example, while the Romesh Sobti-led IndusInd Bank has ramped up its distribution business and avoided a conglomerate approach to remain capital-efficient, it has also focussed on customer needs by innovating on services which would otherwise be deemed commoditised. This quality is also evident in Blue Dart, which is constantly evolving to provide customers the best possible experience. On the other hand, Havells chose to differentiate by pricing its fans higher than competitors to ensure profitability and stay away from the economy segment. These are just a few threads. There are many more you will find as you read their stories in the pages that follow.

With the discussions around the much-awaited Goods and Services Tax (GST) gaining momentum after a longish lull, there is once again hope within India Inc that this key reform, which can immediately add a couple of percentage points to India’s GDP growth rate, may finally see the light of day. This issue brings you a detailed poll conducted by Grant Thornton of what corporate India expects on this front.

There’s also a sizeable dash of show business in this issue: The definitive Forbes list of the world’s 100 highest-paid celebrities. Together, they raked in over $5.1 billion pretax in the past year, more than the combined GDP of Bhutan, Gambia and Belize. On the list from India: Shah Rukh Khan at number 86 with $33 million and Akshay Kumar coming in at 94 with $31.5 million, the same figure clocked by Brad Pitt. Evidence enough of Bollywood’s financial clout.

Tweets by @forbesindia
The long road less travelled
Who's who of India Inc attend launch of 'She Walks, She Leads'