How the Sampath sisters' Yogabar brought healthy snacking to India

From a retailer attitude of 'only tasty, not healthy, sells in India', to building a successful healthy snacks brand, the Sampath sisters have consistently grown Yogabar across various categories. Now, it is looking to expand into children and infant foods 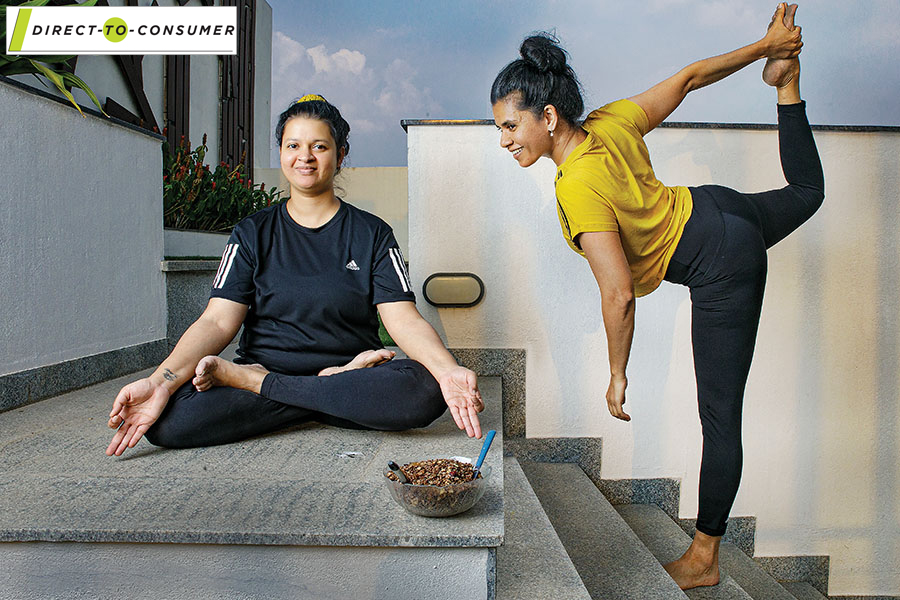 Starting with energy bars in 2015, sisters and co-founders of Yogabar Suhasini Sampath (left) and Anindita Sampath have since expanded their product portfolio to include muesli and oats among other things Image: Selvaprakash Lakshmanan for Forbes India

It all started with the name. Anindita Sampath and Suhasini Sampath were living in New York in 2012. The former worked at a managerial position at Ernst & Young, while the latter was doing an exchange programme at Wharton. The sisters would go for yoga classes at the Flatiron Building. After one such session, they went to a Trader Joe’s. Picking up a protein bar Anindita said, “If we made a healthy protein or energy bar like this, I would call it ‘Yoga bar’.” Suhasini loved the name so much that she trademarked it almost immediately that year. “But we incorporated the company—Sprout Life Foods—only in 2015,” she says.

The duo used those three years for research and development (R&D), and understanding the market. “We wanted to make a 100 percent clean-ingredient-based product, sourcing raw materials from India, which can be consumed by a majority of India looking for healthy food,” says Suhasini, who returned to India in 2012; Anindita, now 41, followed suit in 2014. In August 2015, they launched their first product—multigrain energy bars—followed by protein bars in 2018. The brand has grown from ₹12 crore in revenue in FY19 to ₹45 crore in FY21.

Around 2014-15, India was unfamiliar with the healthy snacking market and people weren’t willing to experiment. “Every retailer we went to at the time said that India mein health nahi bikta, sirf taste bikta hai [in India health doesn’t sell, only taste does],” recalls Suhasini, adding that all her efforts to convince retailers went in vain. The sisters, however, were hopeful that the Indian market would eventually accept healthy snacking, and make it the next best thing to home-cooked food.

Their instinct seems to have been proved right. According to a recent report by market research and consulting firm Ipsos India, 78 percent of 4,148 respondents polled said healthy snacking is very important (58 percent) and fairly important (20 percent).

For their R&D, the Sampaths spent close to a month in a remote village near Coimbatore designing machines for their manufacturing unit. “I think most people would outsource their products, but we felt that the quality parameters in India back then didn’t suit the kind of company that we wanted to build. So we chose the hard way, and decided to build everything ground up,” says Suhasini, 39, who is co-founder and COO. This initial learning has helped the company expand fast.

In FY18, when they launched their breakfast category, they had a 20,000 sq ft factory on the outskirts of Bengaluru with close to 50 employees; today it is a 60,000 sq ft factory in Tumkur in Karnataka with over 150 staffers. “We decided to offer an 80 percent better product, but for a 20 percent higher price,” says Suhasini. Currently, a significant portion of Sprout Life Foods’ sales comes from Tier II cities.

After having exhausted their personal funding during the R&D stage, the sisters took a loan to set up their first factory, followed by a food grant from the Indian government. In 2019, the Yogabar team raised its first round of funding of ₹1.2 crore from Fireside Ventures. “Around that time, we were clocking a revenue of ₹10 lakh, and were seeing a significant number of repeat customers,” says Suhasini. In 2020, they raised a Series B round of ₹6 crore from Elevation Capital. A spokesperson at Elevation Capital says, “We invested in Yogabar since we saw the opportunity to create a new-age multi-category food platform focussed on the health conscious modern day Indian consumer in the company.”

Suhasini adds, “We’ve got a lot of support from investors, and given our background, I think people were willing to bet on us.”

In the first three years, Sprout Life Foods only focussed on bars. It began expanding its product portfolio in FY20—starting with muesli, oats, peanut butter and quinoa. The latest addition has been packaged breakfast food for children and infants. Was the decision to move into the breakfast category part of a long-term plan? “Not really. Customers started looking at Yogabar to satisfy their healthy consumption patterns. Breakfast and snacks are two occasions when people prefer packaged food, while dinner and lunch is about cooked meals. Hence the expansion,” explains Suhasini. Currently the majority of its revenue comes from bars and muesli, and 15 percent from oats and peanut butter and they are looking at getting a significant chunk from the kids cereal range. 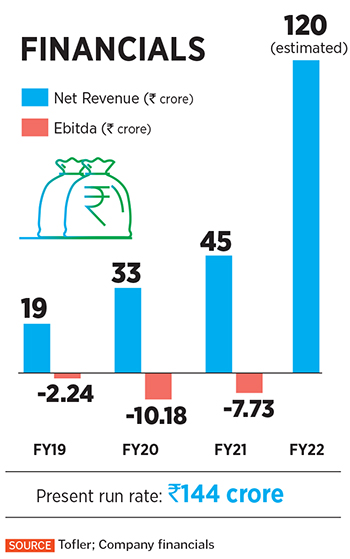 Within the protein and energy bars space, Suhasini claims, “The brand ‘Yogabar’ is almost a noun now. People who want to buy a protein bar go to the market and usually end up asking for a ‘Yoga bar’, irrespective of what brand they buy.”

On the other hand, for muesli, she says, Yogabar is a challenger brand after Kellogg’s. The strength of legacy brands lies in distribution with a presence, for instance, in almost 60,000 stores, whereas Yogabar is present in only 6,000 stores. “It has been a fantastic journey to have been able to achieve what Kellogg’s has taken over a decade to do,” says Suhasini.

Though there are a lot of new Indian startups in this space, Yogabar claims to be 10x the size of any other player. “Yogabar’s brand resonance and recall with the customers clearly stand out. It’s possibly the strongest brand equity built by a new-age D2C (direct-to-consumer) food and beverage brand,” says a spokesperson of Fireside Ventures.

The founders believe that the company understands customers, and are able to give them what they want. “That is our core strength,” says Suhasini. “There might be a couple of startups raising more money than us, raising money faster than us... but what can’t be replaced are the products that win in the market.” The company hasn’t run any above-the-line or below-the-line marketing campaigns. “The only marketing we’ve done is have people sample our products. The product has sold itself and has always been at the centre of everything,” says Suhasini.

It was all hunky dory till the pandemic. The lockdowns and subsequent restrictions meant that the company had to rejig the entire distribution strategy—move it from being offline-focussed to an online business. Going by their online market share, the company says the initial traction with oats is even better than muesli.

Now that things are getting back to normal, Yogabar will continue focusing on its offline-focussed distribution strategy. “We do face the heat, and going forward as well, FMCG players are likely to block distributor shelves. But we will find a way around,” says Suhasini.

In the next five years, Yogabar hopes to expand to about 60,000 offline stores and turn into a ₹1,000-crore company. It aspires to heavily play in the children and infant categories. “We are glad that we are giving large FMCG players a good run for their money… and we do that by staying honest to what we do, keeping the customer at the centre of everything, and creating food that is full of wholesome ingredients.”