30 Under 30: Toshendra Sharma - A messiah for cyber security

Toshendra Sharma is poised to disrupt the world of cyber security 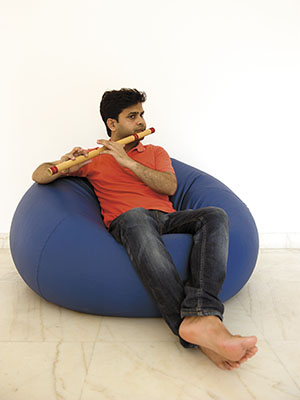 Image: Amit verma
His startup leaves Toshendra Sharma with no leisure time, except a few breaks to play the flute


Unlike most 26-year-olds, Toshendra Sharma doesn’t complain about the lack of weekend breaks. “My father was a fruit vendor and worked 24/7. Working with him in my childhood has given me my work ethic,” says Sharma.

The result of his work ethic is Wegilant Net Solutions which, according to Ravi Gururaj, chairman of the Nasscom Product Council and investor in Sharma’s startup, solves a “deep pain point” in the IT-security space. Typically, given data sensitivity, most companies focussed on features first and performance second; security was only a tertiary thought.

Wegilant specialises in this niche, with its key product Appvigil, launched in 2014. It targets the global market of mobile application (apps) security, and is delivered successfully at competitive prices, despite being up against firmly entrenched global players like HP and IBM. Its customers include IT-security solutions provider Quick Heal Technologies, Meru Cabs, enterprise messenger app GupShup and customer chat services company Haptik Inc. It also has clients in the US, Hong Kong, Japan and Australia.

Sharma started Wegilant in October 2011, while pursuing his MTech degree in computer science at IIT Bombay. “I wanted to start something but couldn’t find a cofounder so I started the company alone. I spent 16 hours a day working and even slept in office. It was madness,” says Sharma.

Bootstrapped for its first three years, in 2014 Wegilant raised seed funding of Rs 1 core. A pre-series A funding of Rs 3.5 crore was raised in April 2015.

“Wegilant has credible ambition to disrupt the cyber security space. It is one of the few Indian product companies garnering global attention. Worldwide, the threat to both governments and businesses arising out of data security breaches is a very real, large and imminent danger,” says Gururaj.

Tweets by @forbesindia
Needed: Entrepreneurial models that work for 'Bharat'
30 Under 30: Saket Modi - Hacking and securing the world wide web