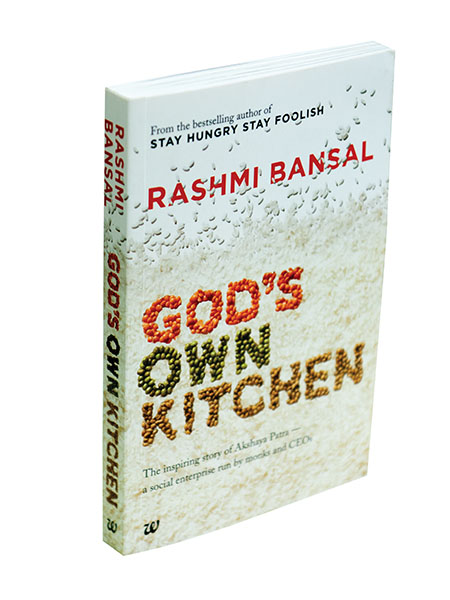 Akshaya Patra, by any yardstick of measurement, is an impressive endeavour: Run by Iskcon, it feeds 1.6 million children freshly cooked, mid-day meals at government-run schools across 11 states in India. Started under a 2001 Supreme Court order, the Mid Day Meal Scheme aims to address classroom hunger and malnutrition and improve school attendance (among other things), and is the largest such programme in the world.

Therefore, a book that comes with a tag line ‘a social enterprise run by monks and CEOs’ holds the promise of telling a story that is informative and inspiring in equal measure. However, not only does it fall short on the first count, it stumbles on the second as well.

This is less of a book, and more of a notebook. One that is full of an endless series of anecdotes, jotted down in a hurry, without much coherence or logical binding. One event runs into another, one anecdote into the next, characters appear like walk-in parts of a play and are abandoned equally arbitrarily, explanations are provided where available and ignored where not, and loose ends abound.

What is, however, common to many of the anecdotes is the crisis-resolution theme: There is a crisis, brilliant minds and hard-working bodies come together, find solutions, persevere, and win. At the same time, while, initially, they make for rather engaging reading, after several of these crises raise their heads and are slain, the narrative falls into a tedious routine.

That, however, does not take away from the truly intimidating scale at which Akshaya Patra’s 27 kitchens function. Churning out thousands of kilograms of food every single day needs, among a lot of other things, funding and organisational expertise. I expected the ‘CEO’ part of the book’s tag line to come into play here, providing meaningful organisational insights. The external CEOs, however, are relegated mostly to cheque-writing roles. (TV Mohandas Pai, then CFO of Infosys, who was instrumental in setting up Iskcon’s endeavour, of course gets due credit.) The details of what it takes to keep the kitchens running are sparse even from Akshaya Patra’s own C-suite of employees.

One maddening part of the book is the absence of captions for its photographs. So, in one photograph it appears that Pai is looking on as Vasundhara Raje Scindia cuts an inaugural red ribbon, flanked by Sudha Murty and Rajashree Birla. But is that Subhash Ghai peeping over Scindia’s shoulder? What is he doing there? No clue. You recognise famous faces like that of Ratan Tata and Bill Clinton, but the absence of captions actually transforms all the people involved in this massive effort—the monks, the cooks, the assistants, and the countless smiling children—into nameless faces. Which is a shame.

But despite the disappointments, God’s Own Kitchen is a fast and (mostly) engaging read. Like fables, each chapter has a small lesson to impart; in each solution is a nugget of wisdom; in each victory is a heart-warming satisfaction. The efforts to find the right machinery to make thousands of chapatis in an hour, or steam hundreds of kilograms of rice, or understand the taste preferences of the remotest parts of India, or the caste politics that play among little children, are small adventures by themselves.

They, in fact, make for engaging anecdotes that you yourself can narrate later on.