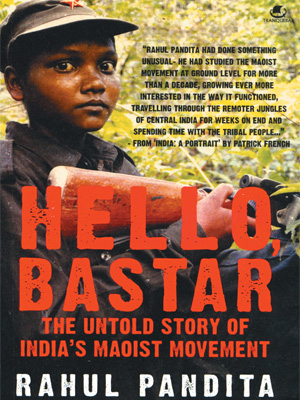 This is a book ripe with promise. Rahul Pandita has done something few others have the dedication or courage to do: Spend time with Naxalites — somewhere along the Maharashtra-Chhattisgarh border — getting a glimpse into their lives and ways. Heady stuff.

But don’t let the adrenaline rush in just yet. Much of Hello, Bastar is a detailed chronicle of the Naxalite movement in India.

It traces how the phenomenon began as scattered incidents — like one of the earliest organised uprisings, in West Bengal’s Naxalbari district, after which it is named — and how it gathered enough power and notoriety to stir the Central government. It describes the structure and functioning of the Naxalite bodies, their aims and objectives.

At times it is slightly tedious, almost reading like propaganda material.

There are brief, scattered stories of people — almost all from the severely oppressed castes and classes — who joined to avenge generations of violence and oppression, or to gain a sense of identity; there are the tales of heroes, some killed, others living legends.

And then, along comes Anuradha Shanbag, (who eventually married Kobad Ghandy, who was arrested in September 2009, and who, incidentally, writes an afterword to this book).

From here on, it is a gripping story of a bright, young, urban woman who had led a life of comfort and peace, yet chose to give it all up for simplicity, tremendous hard work and dedication to the cause, becoming an inspiration to many.

The book leaves much unanswered, much unasked. Pandita’s questions to the Naxalite leadership meet with predictable speeches; contradictions and flaws within the movement are brushed aside. At least thrice he emphasises how the Naxalites have filled a void left by an uncaring state machinery and lists the development work done by the rebels. It’s unclear, though, whether this work has actually been done, or is just part of those sermons. The atrocities Naxalites have perpetrated remain unaddressed.

Although there are some details of their sources of funding and weapons, these seem too little to sustain a violent movement of this scale.

At finish, you are left with a feeling of incompleteness. Pandita has put together copious details, first-hand and from media reports and interviews. But what is starkly absent is the touch of his own experience of spending time in some of the most feared regions of the country.

(This story appears in the 09 September, 2011 issue of Forbes India. To visit our Archives, click here.)

Tweets by @forbesindia
Can Space Elevators Be a Reality in 2100? Michio Kaku Answers
FedEx Tries To Catch Up in India