Looking back on the dark days, 40 years later 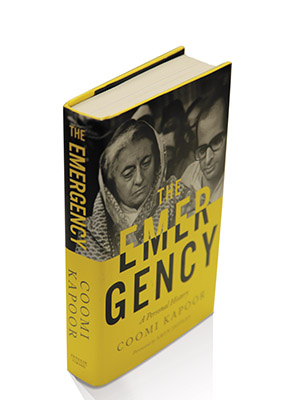 Few events in independent India have evoked as much condemnation as the Emergency. Civil society pretty much took a break between 1975 and 1977; the judiciary did the government’s bidding; and enough commentators have long bemoaned the role played by the media. Many who committed the worst atrocities were never held accountable for their actions. For example, Navin Chawla, who was the officer on special duty to the lieutenant governor of Delhi, went on to become the chief election commissioner. In the end, it was left to the rag-tag bunch of politicians in the Opposition, humbled and humiliated (and for the most part imprisoned) to provide some semblance of resistance as Indira Gandhi rode roughshod over the country.

For Coomi Kapoor, the proverbial midnight knock during the days of the Emergency was all too real. Her husband, journalist Virendra Kapoor, was jailed for nine months. Worse, he was shunted between Tihar jail and Bareilly jail, leaving Kapoor, a young mother, to run from pillar to post, seeking information about his location. Kapoor narrates in gripping detail how she would take the train on Friday evenings from New Delhi to Bareilly. “The overnight train was grimy and overcrowded; monetary circumstances were such that I had no option but to travel second class.” Also, her husband was kept in solitary confinement with his legs shackled and one can’t help but think that some of the measures were totally excessive. Gandhi and her acolytes had the Opposition effectively neutered; was the humiliation really necessary?

Given the ordeal she went through personally, Kapoor’s restraint and dispassionate rendering of events are admirable. Hers is not a book filled with recriminations.

Her retelling of everyday events during the Emergency makes the book highly readable. No doubt as a journalist at The Indian Express—one of the few newspapers that stood up to the government—she had an excellent vantage point. But the book also scores in its excellent research. To read it is almost like living in central Delhi during those fateful years. No detail is too small to leave out. For example, Kuldip Nayar’s ‘scoop of the century’ reporting in January 1977 that elections would be held by March. And then there are gems that only a dogged reporter like Kapoor could unearth: Siddhartha Shankar Ray, a barrister and then chief minister of West Bengal, was the only (known) person who called Gandhi by her first name.

It is Kapoor’s reporting on Subramanian Swamy (who is married to her sister Roxna), the JP Movement, and Sanjay Gandhi and his coterie that provides the most riveting chapters. She details how Jayaprakash Narayan’s steadily growing following caused Gandhi to get more and more insecure about her position.

While the immediate spark for the Emergency may have been the Allahabad High Court finding Gandhi guilty of electoral malpractices, Kapoor says, “The truth is more complex. Dictatorial tendencies do not surface overnight… Mrs Gandhi’s autocratic streak was increasingly evident from the growing accumulation of power in her own hands.”