The Inventus Capital India team prefers to keep it simple, both in life and in their investments 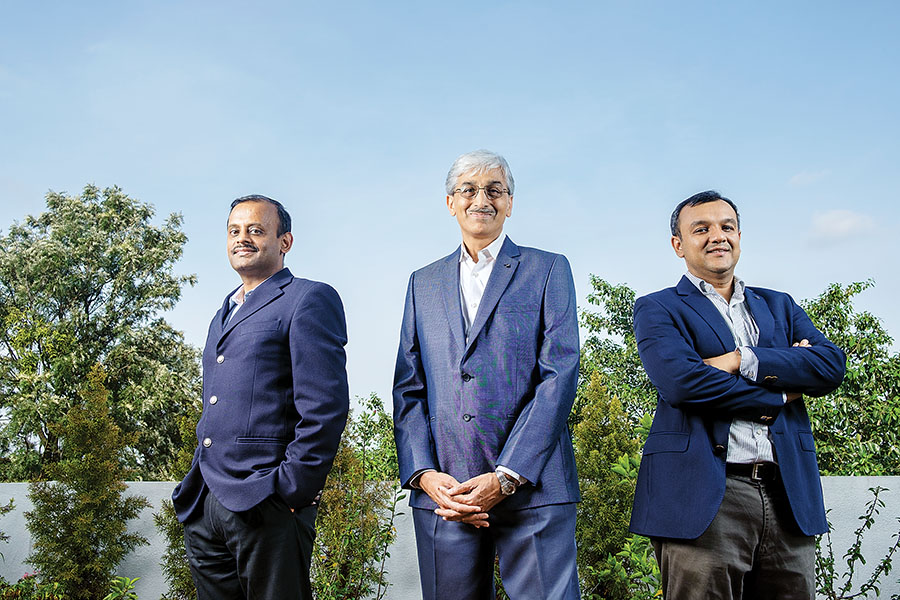 Talk about the perceived high life of venture capital (VC) executives and Parag Dhol, managing director at Inventus Capital India, will cut you short. “We have delayed gratification ourselves. Look around and you will know,” says Dhol.

This may sound a bit like braggadocio, but Dhol and his colleagues at Inventus Capital’s India unit—Samir Kumar and Rutvik Doshi—are known to shun ostentation. Such is their aversion to grandstanding that walls of the firm’s office, a no-frill setup in a quaint Bengaluru neighbourhood, are bereft of even a single plaque trumpeting their marquee investments.

And there isn’t a dearth of them. In fact, Inventus Capital was among the first VC firms to taste blood in an exit-starved country like India with the sale of bus ticketing portal redBus to the Ibibo Group for $100 million in 2013. It walked away with approximately $25 million, about 10 times the money invested. It is an investor in Etechaces Marketing and Consulting, which runs the PolicyBazaar and PaisaBazaar portals, the latest homegrown consumer internet startup to enter the unicorn club.

The team at Inventus is on a hunt for entrepreneurs who have delayed gratification with dogged determination, as more often than not such founders run a tight ship than a leaking boat. “Over the years, I have believed that one key criterion for an entrepreneur to succeed is the ability to delay gratification. They know it will take time (to build a business) and are willing to wait that long and not look for a quick flip,” says Dhol. Avers Doshi, “This holds good for us as well. Look at the cars that we drive.”

A veteran of 25 years, Dhol, who had his first brush with venture capital at ICICI Venture in 1993, owns a Volkswagen Vento. Doshi, a former Google executive, drives around in a decade-old Honda City. “You like the person to be different from you in many ways but in some basic ways, you want the entrepreneurs to be like you,” he adds.

Dhol, Kumar and Doshi have excelled at finding such people. Take for instance, Yashish Dahiya, CEO at PolicyBazaar. Or, Phanindra Sama, the former CEO at redBus, who turned a dollar millionaire five years ago. Both drive around in beaten hatchbacks—Dahiya owns a Maruti Suzuki Swift and Sama a Hyundai i10.

Cautious as they may appear, the operators at Inventus Capital’s India unit don’t blink before taking risks to seal a deal that seems worthwhile. Their crown jewels—PolicyBazaar and redBus—are fruits of intrepid decision-making rather than protracted deliberations. Inventus backed both companies at a time when most VC firms had turned them away.

It funded redBus in 2009, soon after the sub prime crisis in the US triggered a global financial meltdown. The aftershocks were felt in India too and Sama, out there to aggregate 850-odd technologically challenged bus operators, found himself in a quagmire. Until Dhol bailed him out, simply because the business made sense.

It was an even bigger leap of faith for PolicyBazaar. In 2011, sector watchdog Insurance Regulatory and Development Authority of India barred online insurance aggregators from making money from advertisement or lead generation, PolicyBazaar’s bread and butter. The company was constrained to sell insurance instead and Dahiya, on a lookout for fresh capital, saw most doors shut on him. Even his existing investors, Info Edge and Intel Capital, wary of regulatory challenges, were iffy about immediately ploughing in more capital.

“Inventus took a contrarian view. It said, we look at the regulation as a management risk, but there are bigger risks in a business. And it gave me a generous valuation of $25 million,” says Dahiya. “It is one of the most underplayed teams in the market. It underplays itself. I have met a number of funds, ones with big and plush offices, those that look into the sea, with wooden floors and all, but the folks at Inventus are nothing of that sort. They have this approach to managing costs, being rational.”

The frugality reflects on Inventus’s portfolio as well. The focus is on identifying “capital efficient businesses”, which aren’t cash guzzlers. “With the $50-70 million capital raised in its lifetime, the company should become sustainable and not need more money to figure out what is happening. Some businesses require a few hundred million dollars to just figure out if they can become sustainable because, until then, they are either grabbing market share or building the market. We will stay away from them,” says Doshi.

Adds Dhol, “A marketplace has three levers: Price, convenience and choice. Typically any marketplace which relies a lot on the price aspect, think about an online retail or hotel aggregation, does not excite us.”

To be sure, some of its investments such as Savaari, a cab service provider, and Cbazaar, an online fashion retailer, have been singed by the price war, where the likes of Ola and Uber in ride hailing and Myntra in fashion have weighed in heavy on smaller rivals with deep discounts.

Consequently, Inventus has stayed away from seasonal flavours such as food delivery or hyperlocal startups. Instead , the fund opted for startups in health care technology, logistics, business to business commerce and software as a service.

The India team is now bracing for a new chapter. Until now, the India partners invested from a global pool—the first $51 million fund was raised in November 2007 while the second fund, a $106-million corpus, was closed in December 2012. Now they are looking at a separate ₹325-crore India-focussed fund, the first in the firm’s decade-long history. It announced the first close of the new fund at ₹200 crore in July.

“ India’s team has our support. Inventus per-necessity became two country-specific funds. It had an added benefit of making decision-making faster.”

Kanwal Rekhi, md, Inventus Capital Partners, US
What prompted the Indian team to split from its US counterparts Kanwal Rekhi, Manu Rekhi and John Dougery?

It was in October 2016, when the team at Inventus Capital started contemplating a third fund, that the India team broached the idea of raising two separate funds. “Limited partners (LPs) have an investment thesis of their own where they earmark how much is to be invested in which geography. The LPs thus had a specific allocation for India and the US, and would not have liked a part of their US allocation to be invested in India and vice-versa. Once we start investing in both geographies from a common pool, there is no earmarking,” says Doshi. “Investors who were willing to do this US and India hybrid, was a small set; we realised it over two fund cycles.”

Besides, in May 2016, India and Mauritius withdrew a clause in a tax treaty that allowed investors capital gains on shares held in Indian companies, a provision that had earlier prompted funds to invest in India from a Mauritius-based entity. Meanwhile, the Securities and Exchange Board of India had allowed Alternative Investment Funds (AIF).

Says Rekhi, managing director at Inventus Capital Partners, in the US, “A separate India fund became imperative as the Mauritius treaty got amended and AIF structure became available. It became impossible to have a cross-border fund and also have Indian LPs.”

“India’s team has our support for this. Inventus per-necessity became two country-specific funds. It had an added benefit of making decision-making faster by having two separate investment committees,” he adds.

The US team is looking to shore up a $75-million fund.

Also, the India investments are poised to generate respectable returns, which gave Dhol, Kumar and Doshi the confidence to strike out on their own.

While redBus hogged the limelight among its India bets—it continues to be the firm’s biggest exit in terms of multiples, across geographies—Inventus also exited Insta Health Solutions and Sokrati, both bets from its first fund, clocking approximately a five-fold return on each. Then, the likes of Power2SME and FundsIndia, which were bankrolled with the first fund, are expected to hand out significant returns as well.

The second fund is yet to see an exit. But, the likes of PolicyBazaar, HealthifyMe, Unbxd, MoveInSync and Tricog, among others, are potential money spinners.

For instance, Inventus’s approximately ₹20 crore investment in Unbxd is now worth ₹50 crore, while the ₹54 crore invested in Power2SME is worth ₹113 crore. An investment of about ₹12 crore in MoveInSync has surged nearly three-fold to ₹32 crore, according to Tracxn, a startup tracker.

“If you look at the India investments, while there have been misses, there are also several hits. The US team also had its fair share of success, take for example Poshmark, Resilinc and Credit Sesame, which it is yet to exit, and the likes of Sierra Atlantic and Viviu, which it has exited,” says a VC executive. “Especially, most US investments from the second fund haven’t yet raised any significant follow on capital. Also, if you look from an ecosystem perspective, given the dearth of funds in India, Inventus has a good brand recall here among early-stage ventures. On the contrary, in the US, the VC space is extremely crowded and deal sourcing becomes a challenge.”

Rekhi says while the first fund is “destined to be the best fund of its vintage”, the performance of the second fund isn’t “fully clear.”

Dhol and Doshi decline to comment on specifics of the India and the US factions’ performance. Says Dhol, “We have a lot of respect for Kanwal (Rekhi). In spite of his elevated stature, he has treated us as equals. For us, this was one of the counterpoints (to raise a separate India fund). We spent quite some time in that dilemma, but eventually concluded that business wise, this was the best outcome.”

“Inventus is not a fund to go with the herd and has stayed true to its conviction. It is setting itself up for a larger second fund in the next three to four years, on the back of a couple of good investments from the current fund,” says Vinod Murali, managing partner at Alteria Capital.

It could be a daunting task for Inventus India to replicate the success of redBus and PolicyBazaar, but, then, this is a team that is well acquainted with the vicissitudes of VC in India. At least, its investors believe their money is safe.

Says Sama of redBus, who has invested in Inventus’s India fund, “You don’t need your money to rest with flashy people but the ones who keep it safe and make it grow.”