The onus on leaders, of countries and companies, wouldn't have been as heavy in a long time as it was in the year of Covid-19, and we celebrate them at FILA 2020-2021 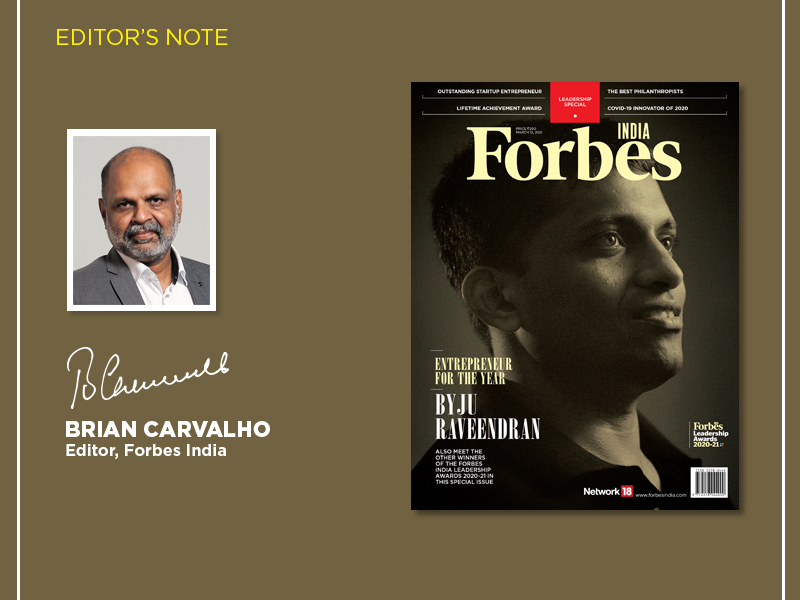 Perhaps the most successful leaders of 2020 would be those who first conveyed the bad news in the early days of the pandemic as effectively as they would have been in guiding their organisations to safety, then normalcy and eventual supernormality. And in that long journey from the point of uncertainty and trepidation to that of greater predictability and confidence, these leaders would have got many things right: They would have calmly engaged with the troops, listened to them and acted on that feedback, without displaying their own insecurities about the road ahead. They would have deftly juggled the goals of maximising organisational profits and the larger team’s welfare. And the most successful of them would have also done their bit to alleviate suffering in a society that had been pushed to the brink.

Napoleon had famously declared that a leader is a dealer in hope. Even more during a crisis. Every year Forbes India celebrates the best in entrepreneurial leadership. Even more reason to celebrate them in the wake of a pandemic.

The Forbes India Leadership Awards (FILA) for 2020-21 is different for many reasons. For one, the onus on leaders, of countries and companies, wouldn’t have been as heavy in a long time as it was in the year of Covid-19.

FILA 2020-21 is different also because the pandemic gave Forbes India adequate reason to tweak the template and take a few new award categories to our stellar jury assembled by Associate Editor Salil Panchal. These are categories that are in sync with Forbes India’s pillars of innovation, entrepreneurship and wealth (not just creating it but giving it back).

The Covid-19 Innovator award, for instance, shone a light on the incredible efforts of a bunch of hitherto little-known startups that modified their business models to provide products and services that helped take on the battle against the virus. The jury had their task cut out choosing between manufacturers of non-invasive ventilators and those of diagnostic tools, to highlight just two such ventures.

Philanthropy in a country of billionaires at the top of the pyramid and a mass of underprivileged at the base assumes significance, even as governments plan for growth and reforms to lift people out of poverty. As long as philanthropy is not only about charity but embraces a holistic approach to social causes, the giving movement too can do its bit for the economy. Just two ways of doing that are by educating more children and prioritising health care.

Forbes India’s focus on philanthropy captures the efforts of a handful in saving lives by donating personal protective equipment kits, ventilators and oxygenator machines and by providing millions of meals over months. What this also brought to the fore is the role professionals in the corporate world had to play in these on-the-ground initiatives. And that is one key reason for having two awards for philanthropy—one that considered head honchos of companies, consulting firms, banks and venture capital and private equity firms; and another to look at philanthropy at scale of the founders and the next-gen at some of India’s biggest conglomerates.

Meanwhile, India’s rapidly-burgeoning bandwagon of startup mavens showed the world how to attract capital and lay building blocks for tomorrow during a time of crisis. Byju Raveendran, who graces the cover, is Forbes India’s Entrepreneur for 2020-21.