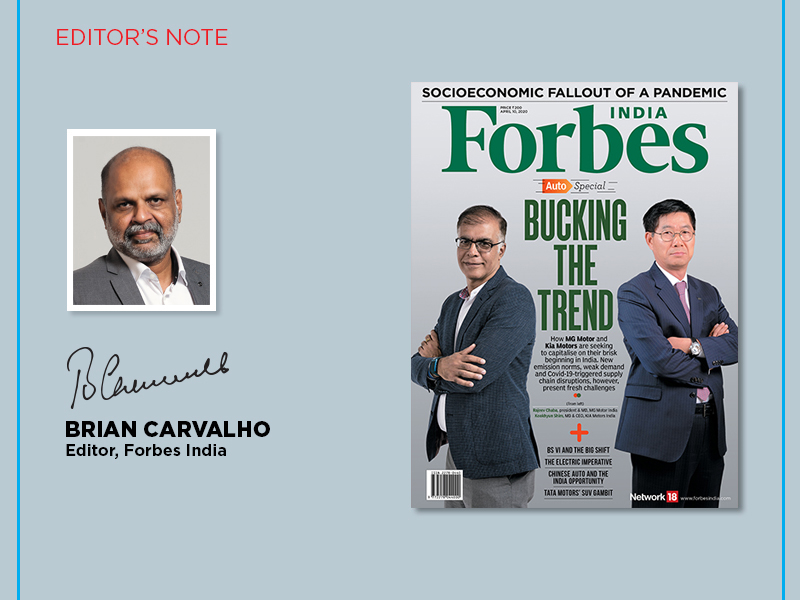 Wuhan in China, the centre of the outbreak of the coronovirus, is also the “motor city” of China, the world’s biggest car market. From General Motors and Honda to Nissan and Renault, a clutch of car makers has their factories there. The World Economic Forum says Wuhan accounts for half of Honda’s production in China and, in 2019, the Hubei Province, of which Wuhan is the capital, was the fourth-largest car producer in China. As car makers stopped production because of the nationwide shutdown, car sales in China fell 92 percent in the first half of February.

A month on, the pain has moved from China to the rest of the world. At the time of writing, car factories in Europe, the US, Canada and Mexico were preparing to temporarily shut down.

There’s little choice, as supply chains—not only from China but most of the developed world—get disrupted, demand slumps and factory workers take the precaution of not turning up.

Cut now to India where the auto sector was feeling the heat of an economic slowdown before the pandemic broke out. Sales of passenger cars plunged by almost 14 percent in 2019 over a year ago, the worst dip in two decades. The woes of non-banking finance companies resulted in a slump in retail loans.

And, come April, the transition to BS VI emission norms will worsen demand as many models become more expensive and a few bow out of the market. The coronavirus crisis has disrupted the supply chain from China, on which Indian and multinational car makers are dependent on.

So that’s the bad news—the spread of the virus, the consequent lockdowns and the fallout on economic growth, with the April to June period expected to be the worst. The exception may well be China, which bore the brunt in the March-ended quarter. As growth in new infections slows down and employees get back to work, economic indicators will slowly pick up. For the rest of the world, a recovery may be some time away, but the planning—and the resolve—to come back is evident.

A crisis is also a good time to look at the opportunities for the Indian auto sector on the road ahead, and in this special issue on automobiles we have done exactly that. The cover story by Pranit Sarda is on two relative new kids in town: MG Motor India owned by SAIC, China, and the Hyundai-owned Kia Motors, who have blazed a trail in quick time. Consider Kia which, since debuting in India in August 2019, has sold 75,000 units of the mid-sized SUV Seltos. And then there’s MG Motor, which has bucked the slowdown with the Hector SUV launch in June 2019.

So where do these two go from here? After all, the Indian car market is no stranger to debutants who started with a bang only to flatter to deceive. Sarda reckons MG and Kia may be better placed than many of the multinationals that entered India earlier.

In the other auto stories, don’t miss Manu Balachandran’s feature on the impending blitzkrieg from Chinese car makers, who may well see in India the opportunity to recover from the Covid-19 crisis. And Jasodhara Banerjee dives into what the new emission norms mean for Indian auto, who gains, and who loses.