Growth remains below trend, business activity levels do not match up to forecasts and deflation continues to be a concern 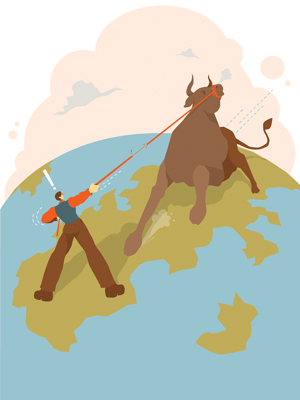 The condition of conjoined twins Mr Market and Mr Economy remains uncertain. Mr Economy has spent much of the last seven years in an induced coma, with only a modest recovery from the Great Recession. The root causes of that episode remain unaddressed. Debt levels are higher now. Global imbalances remain. The financialisation virus has proved resistant to available medicines. Structural changes have proved difficult.

Trade growth, another key indicator, is weak. In recent history, it has averaged double of economic growth rates. Now trade growth is below economic growth rates, suggesting further falls in activity. It may also signal a slowdown in cross-border financing of trade and a shift towards autarky, or closed economies, as the benefits of globalisation diminish.

Businesses are experiencing activity levels lower than official forecasts, suggesting that the latter reflects an optimistic bias designed to maintain confidence. Ultimately, Mr Economy’s condition will depend on facts rather than forecasts. As Aldous Huxley observed: “Facts do not cease to exist because they are ignored.”

Disinflation or deflation concerns remain. Normally, stable or falling prices would not be problematic. However, Mr Economy’s high debt levels would become unmanageable under such conditions.

Efforts to boost inflation have failed. With oil prices around $40 per barrel, sharply lower commodity prices and over-capacity in many industries, the chances of improvement are low. Low or negative interest rates, in part engineered to manage Mr Economy’s elevated debt levels, signal that higher inflation is unlikely.

Consulting physicians are disappointed that lower oil prices did not provide the expected increase in activity. The damage to exporters, like OPEC members as well as Russia and Brazil, appears to have been greater than the benefit to oil importers with the possible exception of India.

Over-production, an unprecedented amount of stored crude (some afloat on tankers) looking for buyers and a fight to the death for market share led by Saudi Arabia suggest prices will remain under pressure. Even the occasional threat of disruption to supplies due to conflict, increasing military consumption and some modest consumption increases seems unlikely to reverse the situation.

Uneven performance
US growth, at around 2 percent, remains below par. Producing things, which end up in inventory or are bought with sub-prime auto loans, does not seem viable in the long run. America’s improvement was driven by a lower dollar, growth in emerging markets and a revitalised energy sector. Much of this is now reversing.

The misery index (inflation rate plus unemployment rate) remains at its lowest level since the 1950s. But faith in statistics is flagging. The price of everything you buy increases, but that of what you don’t buy is falling. Employment gains are overstated by falls in the participation rate and part-time jobs. Employment as a percentage of population has not recovered. The bulk of new jobs are poorly paid, lack security and progression. Hours worked and wage growth is weak. As a consequence, consumption and investment remain fragile.

The expectation was that, in 2016, America could be taken off its low interest rate medication. This still remains a plan. But higher rates may curtail progress. Investment, already slow, may fall. A stronger dollar, already up by over 20 percent, will affect corporate profits and export competitiveness. It may trigger financial market instability.

The condition of Europe and Japan is more desperate. Europe’s tentative recovery was driven by negative short term rates, massive QE, a weaker euro (driven in part by these policies) and low oil prices. But the continent has a deteriorating outlook with economists hunting for second decimal points of improvement with microscopes.

German exports to emerging markets are slowing. The Volkswagen emissions scandal has brought into question Europe’s much-vaunted technical prowess. European debt problems and the banking sector’s high level of non-performing loans (€1.2 trillion) remain unresolved. In the aftermath of the attacks in Paris, the French government has announced that it will not abide by deficit and debt limits. Italy refuses to bring public finances under control, despite a worsening debt-to-GDP ratio.

Greece is likely to be in the spotlight, with a probable relapse. The government will find it difficult to meet bailout conditions raising the issue of default, Grexit, or both, amid growing reluctance for further support. Portugal’s new government, an uneasy coalition between foes, has sworn allegiance to the European Union (EU) and the euro but is seeking major concessions. With the highest total debt-to-GDP in the EU, a Portuguese debt restructuring, explicit or de facto, is not unimaginable.

Despite positive talk, Spain’s public finances remain poor and unemployment unsustainably high. The recovery stays uneven with excessive reliance on domestic consumption and exports, primarily automobiles, to other European countries. Spain has been without a government since December 2015 and new elections seem the likely next step, making the nation vulnerable to political instability.

Europe’s refugee crisis may boost economic activity, but is expensive, at around €10,000 per refugee per year initially, pressuring weak finances. It has also highlighted deep divisions within the EU and a rancorous decision-making process. Serious opposition to immigration and free movement of people required by the Schengen treaty has emerged.

Questions about the EU and euro continue. The former poster child of European integration—Finland—is in recession. Its options are limited as it is unable to respond by adjusting its currency or interest rates. The Finnish parliament is to hold ‘Fixit’ hearings next year, debating an exit from the monetary union and a return to the markka. Britain will vote in June in a closely-contested referendum about their participation in the EU.

Japan has entered its fifth technical recession in seven years, casting doubts on the ability of Abe-nomics to arrest its two decades of economic stagnation.

No one believes that China is growing at around 6-7 percent per annum. Official growth does not reconcile to underlying individual statistics, such as trade, investment, consumption or real production. It is incompatible with policy actions, which include six interest rate cuts since November 2014 to record lows, steps to increase bank lending and devaluation of the yuan.

A massive credit expansion, mal-investment, overcapacity in many industries and property and stock market bubbles are proving increasingly difficult to contain. Chinese economic managers are also finding it difficult to shift towards domestic consumption as a new source of growth. The only debate is whether the adjustment will be a soft or a hard landing.

With it contributing around one-third to half of global growth, a deceleration in China will set off negative feedback loops in the global economy. Other countries are reliant on China as a source of demand, with around 40 countries having it as their largest export destination.

Like China, once a beacon of hope for Mr Economy, emerging markets face several headwinds. Sub-par growth in developed markets and China combined with low commodity prices are key sources of weakness. Deep-seated structural problems, including inadequate infrastructure, lack of institutions, corruption and environmental degradation, are now impinging on activity.

Mr Economy also faces one of the three strongest El Niños since 1950, which will create severe weather conditions leading to a reduced economic activity.

Mr Market has regained his irrational exuberance. He has bounced back from the depressive episodes of August 2015 and early 2016, though more on short covering than fundamentals.

Mr Market’s continued health requires improvement in Mr Economy’s condition, as the twins share vital organs. But Mr Market insists that he doesn’t need growth or inflation to prosper. He told his psychiatrist that financial instruments are not merely claims on real assets and cash flows but represent a separate reality.

Unicorns (startups with valuations greater than $1 billion) in technology and biotechnology sectors reflect the desperate search for growth and dangerous optimism about prospects. Valuations, such as Uber’s private market valuation of $50+ billion, are not supported by economics, but rely on promotion by shrewd principles, venture capitalists and investment bankers.

Real estate prices have risen, driven, in some cases, by the sharp fall in the last crisis. Disillusion with other asset classes, cultural biases that favour property and the inexorable flow of capital fleeing unrest or risk have boosted values, especially in desirable world cities.

Mr Economy’s stresses are increasingly being seen in volatile currency values. Countries are using a mixture of low interest rates, QE and direct intervention to manage the exchange rate. It is designed to reduce the value of outstanding debt held by foreigners. It also increases competitiveness and a nation’s share of global exports and growth. Mr Market’s ability to withstand the fluctuations and pressures of such currency wars is questionable.

A stronger dollar pressures US corporate earnings and competitiveness, in turn affecting equity values and economic activity. A higher US dollar, higher interest rates and tightening global liquidity conditions represent a major challenge for emerging markets. Capital outflows have weakened emerging market currencies. It has reduced the availability of and increased the cost of finance. Weak export revenues, falling currency reserves and unhedged US dollar currency combined with around $9 trillion of debt will squeeze these economies and drive instability. But a weaker dollar means a stronger euro and stronger yen with consequences for these economies.

Confident of their ability to juggle grenades with their pins pulled out, analysts are trying to pick bottoms in weak emerging markets. They ignore the fact that the recent rise in the US dollar may be part of a longer term trend, which parallels a similar trajectory in the late 1990s which triggered the Asian monetary crisis, Russia’s default, and a plunge in crude oil prices to $10.

Much of the improvement in the condition of Mr Economy and Mr Market, especially the latter, is due to the administration of ample amounts of vital liquids. The treatment addressed symptoms rather than the underlying disease. While doctors have not lost hope, they fear that the therapies have reached a point of diminishing returns. More of the same—QE, negative interest rates, additional fiscal stimulus—are increasingly difficult. There are technical challenges as central banks reach operational limits without a significant change in their rules of engagement. Quantitative easing has morphed into quantitative exhaustion or perhaps QE infinity.

The ability to withdraw support already resembles the game of Jenga. Policymakers fight gravity as they seek to withdraw each block one by one without causing the entire structure to crash.