The End of Europe's Remission 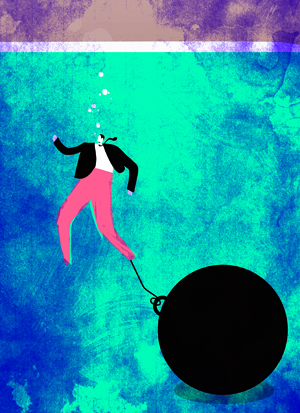 Since mid-2012, the European financial crisis has been in remission, with the symptoms of the underlying disease temporarily suppressed. As treatment is discontinued and drugs lose efficacy, there is a high probability of a relapse.

Taking the Waters
A combination of austerity programmes, debt write-downs, the European Central Bank’s (ECB) commitment to “do whatever it takes” to preserve the euro, the proposed banking union and the finalisation of the primary bailout fund (the European Stability Mechanism or the ESM) helped restore relative financial stability. There were falls in the interest rates of peripheral countries and a rally in stock markets, although no meaningful recovery in the real economy.

Falling Off the Austerity Wagon
Austerity has failed to bring public finances and debt under control. Increases in taxes and cuts in government spending have led to sharp contractions in economic activity, reducing government revenues and increasing welfare and support payments as unemployment rates increase. Budget deficits, while smaller, persist and debt levels continue to rise.

Individual economies have fared even worse: The Greek economy has decreased by 23 percent; Ireland by 8 percent, Portugal by 8 percent, Spain by 8 percent and Italy by 9 percent. Eurozone unemployment is 12 percent.

Governments have found it difficult to continue austerity programmes in the face of weak economic activity and high levels of unemployment. Pleading exceptional circumstances and extraordinary conditions, many nations have sought and received exemptions. Deficit and debt reduction targets have been deferred, although even these new reduced or deferred thresholds are unlikely to be met.

Write Me Down,Write Me Up
Further writedowns to reduce debt, as in Greece and Cyprus, to sustainable levels is difficult. Official lenders now directly or indirectly own large amounts of the relevant debt.

The ESM, the ECB and the International Monetary Fund (IMF) have direct loans to or have purchased bonds issued by Greece, Ireland, Portugal, Cyprus, Spain and Italy. The ECB and national central banks have substantial loans to Eurozone central banks and banks secured over the bonds of beleaguered countries. For example, the ESM, ECB, IMF and European central banks now hold more than 90 percent of Greece’s outstanding debt.

Further debt writedowns, providing relief for the borrowing nations, would result in immediate losses to these official bodies, ultimately flowing through to the taxpayers in stronger countries such as Germany.

The Invisible Measure…
The ECB Outright Monetary Transactions (OMT), which allows purchase of unlimited amounts of the debt of Eurozone nations, has been hailed a success. President Mario Draghi has, self-effacingly, referred to it as the “most successful monetary policy measure undertaken in recent times”.

Details of the yet-to-be-used programme remain opaque, especially on key issues such as the ECB’s status as a preferred creditor on such purchases in the event of default or restructuring.

The OMT programme is conditional, requiring the relevant government to formally request assistance and agree to comply. It will be politically difficult for countries like Italy and Spain to ask for assistance if required, knowing that if a future debt restructuring is necessary then domestic taxpayers face a loss on their bank deposits, as in Cyprus. If they are forced to seek assistance, then it will be under such extreme conditions and market pressures, meaning that ECB intervention may be too late.

Germany and other Eurozone members remain opposed to unlimited purchase of sovereign bonds under the OMT. Its legal basis remains uncertain. The result of a challenge being heard by the German constitutional court is unknown.

Diluting the Break
The banking union was intended to “break the vicious circle between banks and sovereigns”.
However, in the period since the announcement of the banking union, bank exposure to sovereign debt has increased, as national banks have purchased the sovereign’s debt which is used as collateral to obtain financing from the national central bank or ECB.

The key elements of any banking union are deposit insurance and a centralised recapitalisation fund.
German opposition forced the ECB president to personally assure the Bundestag that a Eurozonewide deposit insurance scheme would not be part of the arrangements.

There are no specific additional financial resources for recapitalisation, which remains reliant on the inadequate ESM. Germany insists that the banking union cannot be responsible for “legacy” risk, that is, problems originating from events before the finalisation of the banking union.

The banking union has become an inadequate single supervisory mechanism for a small number of Eurozone banks, maintaining pretence of action and progress and allowing all governments to save face. The European Union has clarified that the goal now is to only “dilute” the link.

Empty Wallets
The scope of the €500 billion ESM is also limited. Following assistance to Greece, Ireland, Portugal, Cyprus and Spain (for the recapitalisation of banks), there is only maximum capacity of around €200 billion, well below potential requirements, especially if Spain or Italy should require assistance.

The ESM’s position is weak as it needs to issue debt, backed primarily by four countries: Germany (27.1 percent), France (20.4 percent), Italy (17.9 percent) and Spain (11.9 percent). If Spain or Italy needs assistance, then the contingent commitment of the remaining countries, especially France and Germany, would increase.

The limitations of the ESM were highlighted by recent rating agency actions. If the ESM injects capital into Eurozone banks (up to a maximum of €60 billion), then it will have to post a collateral of €120 billion (ie on a 2:1 basis) to maintain its credit rating required to raise debt.

Testing Times
History suggests that European governments and the ECB will be tested.

First, the weakness of the real economy will increase financial pressure on European countries. During the second quarter of 2013, European economies recorded slow growth, technically ending the recession. However, the levels of economic activity, excluding Germany and France, remained low. The turnaround may prove fragile, given deteriorating conditions in emerging markets, which have been major buyers of European exports.

Second, banking sector problems will continue. European banks may have as much as €1 trillion in non-performing loans. Italian banks may have as much as €250 billion of these.Increasingly, European governments are resorting to tricks to resolve problems of the banking system, including inadequate stress tests, overly optimistic growth and asset price forecasts and accounting stratagems. For example, Spain is seeking to convert €51 billion in deferred tax assets, resulting from loan losses into core capital to meet minimum requirements. If successful, these would represent around 30 percent of Spanish bank core capital.

Without urgent and resolute action, bad debts and weak capital positions will create zombie banks, unable or unwilling to supply credit to the economy, restricting any recovery.

Third, crucial structural reform of labour markets and entitlements will be slow, reflecting weak economic activity and also the unpopularity of many measures.

In addition, the relative stability of the last 12 months has lulled governments into a false sense of security, reducing the urgency of pursuing economic restructuring.

Fourth, political tensions, both national and within the Eurozone, are likely to increase.

As evident in Greece, Portugal, Spain and Italy, weak economic conditions have increased pressures on the government, highlighting political differences and destabilising fragile ruling coalitions. All these countries also have domestic issues that contribute to political instability; for example, the bribery scandal involving the ruling People’s Party in Spain and the continued legal difficulties of former Italian Prime Minister Silvio Berlusconi.

Across the Eurozone, Germany’s repeated rejection of any steps amounting to a mutualisation of debt or hidden transfer payments as well as a reluctance to increase German commitments, increasingly supported by northern European nations, will complicate crisis management. Little is expected to change after the German elections.

Enough, Already?
Economic and political pressures will manifest themselves in a number of ways. Weaker countries may require extensions of existing loans, additional assistance or debt writedowns.

Borrowing costs of weak European countries have begun to increase, reflecting different factors including: Economic weakness of the borrowers, political stresses and also the potential reduction of the US quantitative easing program. Doubts about the OMT programme and decreasing flexibility to use national banks and state pension funds to purchase government debt will accelerate the pressure on rates.

For Europe, it is now a case of NWO (no way out), as without strong growth (which is unlikely) its debt problems may prove intractable. The ECB has repeatedly stated that its ability to respond to pressures is “adequate”. Unlike in July 2012, it is not clear whether its response will be “enough” this time around.

Satyajit Das is a former banker and author of Extreme Money and Traders, Guns & Money

Tweets by @forbesindia
Rakesh Tandon: Steering the Resurgence of IRCTC
Chitra Ramkrishna: Queen of the Bourse