Women with a mission 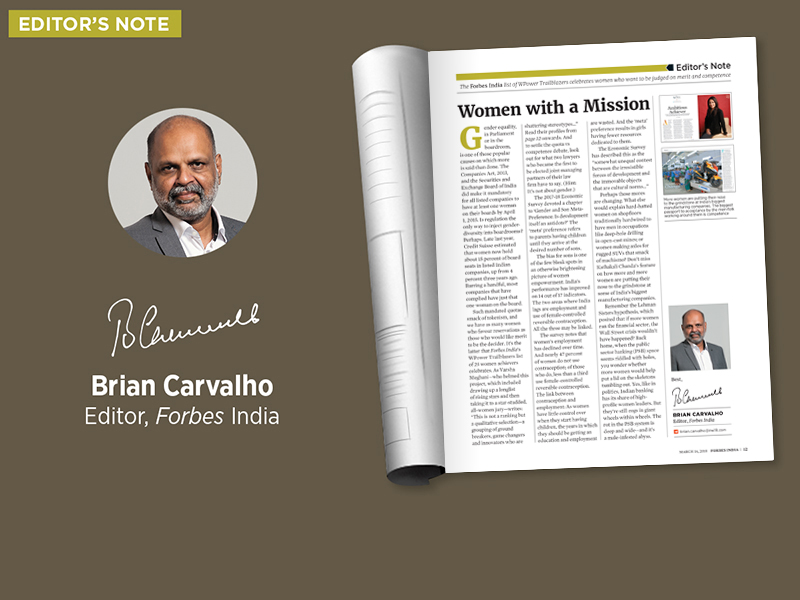 Gender equality, in Parliament or in the boardroom, is one of those popular causes on which more is said than done. The Companies Act, 2013, and the Securities and Exchange Board of India did make it mandatory for all listed companies to have at least one woman on their boards by April 1, 2015. Is regulation the only way to inject gender-diversity into boardrooms? Perhaps. Late last year, Credit Suisse estimated that women now hold about 15 percent of board seats in listed Indian companies, up from 4 percent three years ago. Barring a handful, most companies that have complied have just that one woman on the board. 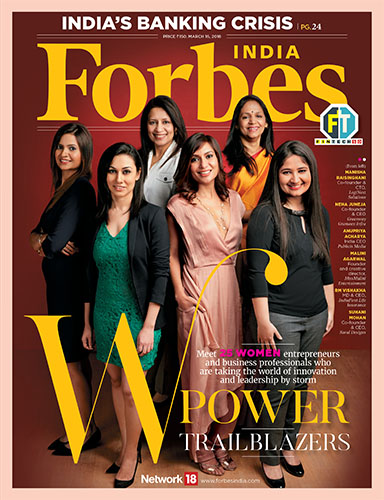 Such mandated quotas smack of tokenism, and we have as many women who favour reservations as those who would like merit to be the decider. It’s the latter that Forbes India’s WPower Trailblazers list of 25 women achievers celebrates. As Varsha Meghani—who helmed this project, which included drawing up a longlist of rising stars and then taking it to a star-studded, all-women jury—writes: “This is not a ranking but a qualitative selection—a grouping of ground breakers, game changers and innovators who are shattering stereotypes…” And to settle the quota vs competence debate, look out for what two lawyers who became the first to be elected joint managing partners of their law firm have to say. (Hint: It’s not about gender.)
The 2017-18 Economic Survey devoted a chapter to ‘Gender and Son Meta-Preference: Is development itself an antidote?’ The ‘meta’ preference refers to parents having children until they arrive at the desired number of sons.

The bias for sons is one of the few bleak spots in an otherwise brightening picture of women empowerment. India’s performance has improved on 14 out of 17 indicators. The two areas where India lags are employment and use of female-controlled reversible contraception. All the three may be linked.

The survey notes that women’s employment has declined over time. And nearly 47 percent of women do not use contraception; of those who do, less than a third use female-controlled reversible contraception. The link between contraception and employment: As women have little control over when they start having children, the years in which they should be getting an education and employment are wasted. And the ‘meta’ preference results in girls having fewer resources dedicated to them.

Perhaps those mores are changing. What else would explain hard-hatted women on shopfloors traditionally hardwired to have men in occupations like deep-hole drilling in open-cast mines; or women making axles for rugged SUVs that smack of machismo? Don’t miss Kathakali Chanda’s feature on how more and more women are putting their nose to the grindstone at some of India’s biggest manufacturing companies.

Remember the Lehman Sisters hypothesis, which posited that if more women ran the financial sector, the Wall Street crisis wouldn’t have happened? Back home, when the public sector banking (PSB) space seems riddled with holes, you wonder whether more women would help put a lid on the skeletons tumbling out. Yes, like in politics, Indian banking has its share of high-profile women leaders. But they’re still cogs in giant wheels within wheels. The rot in the PSB system is deep and wide—and it’s a male-infested abyss.
To Check Out The Full 2018 W-Power Trailblazers List, Click Here
To Read The Overview of the 2018 W-Power Trailblazers List, Click Here Best,
Brian Carvalho
Editor, Forbes India
Email:Brian.Carvalho@nw18.com
Twitter id:@Brianc_Ed