The practice of courage 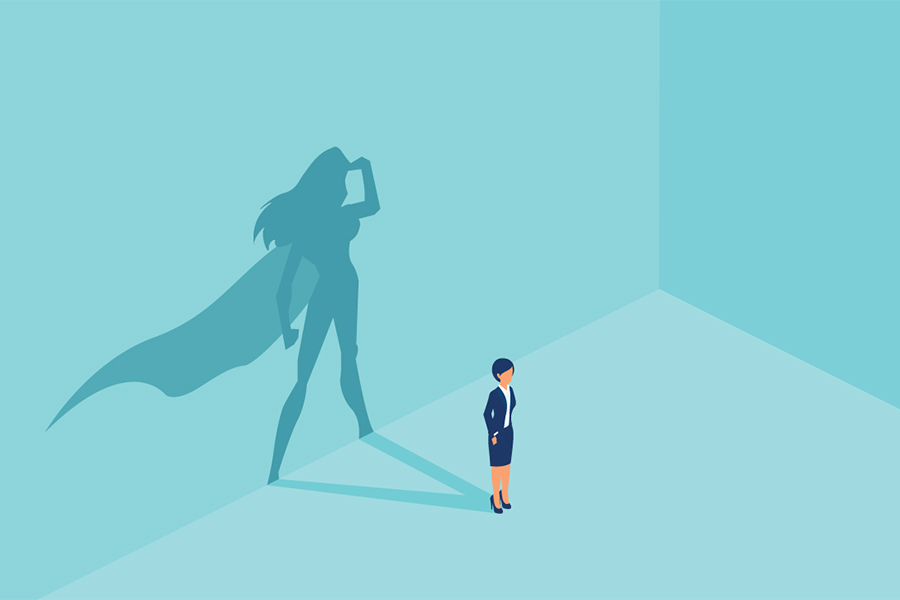 Darden Professor Jim Detert has a novel idea for business leaders: It doesn’t matter how big your leadership toolkit is if you won’t be courageous enough to use those tools when it counts. And just like any other competency, you can learn, practice and strategically deploy this ability to act skillfully in high-stress moments. In his new book, Choosing Courage, Detert sets out a detailed roadmap for building these courage muscles, as well as determining how and when to use them.

In “The Importance of Courage,” we took a look at the essential premise of the book and at the risks that come with courageous decisions and failing to enact them. Here, we dig deeper into practical recommendations for getting to the other side of fears.
Practical Practice

The ability to act courageously, with competence, comes from habituation, says Detert. This means exposing yourself to certain risks in order to build greater self-efficacy and the motivation to keep pressing forward. The psychologist Stanley Rachman led groundbreaking research in the 1980s that demonstrated how — under expert instruction and in a supportive environment — aspiring paratroopers learned to act with less fear and greater skill through repeated practice and exposure to risk.

Detert has transposed this into what he calls the courage ladder: a personalized framework that we can use to carefully expose and habituate ourselves to certain workplace risks or fears, thereby diminishing the emotional power that they hold over us.

“You don’t just charge into a room a pick up a snake that you fear,” says Detert. “Your first step might only be to enter the room and do some deep breathing from 10 feet away …. Fairly soon, that would become downright boring, and you’d be ready to get a bit closer. Before doing so, you might learn some cognitive techniques to further help you beat back the fear that threatens to overrun the rest of your brain.”

Detert’s Courage Ladder is a simple visual tool that enables leaders both to articulate the things that frighten them and to order those things into a hierarchy of ascending risk.

The Courage Ladder
At the bottom rungs of your personal ladder, Detert suggests you put the fears you consider most manageable, and at the top, the things that scare you most.

Detert recommends that you then start with the smaller things and work your way upwards as you build your skillset and confidence. Taking small, manageable steps first teaches you that you can survive discomfort and move on, says Detert, even if you are miserable in the moment.

“Say you speak up with a new idea in a staff meeting and the boss shoots it down. You feel terrible that night …. The next morning, you’re still stewing on it. That stinks for sure. But what we often forget in remembering experiences like this is that we got past them.”

Viewed as a learning experience, the courage ladder approach teaches you two things. First, it gives you a chance to practice specific approaches and determine the types of behaviors that work well in a certain situation — or that don’t. Second, it demonstrates that you are capable of living with and moving past some degree of emotional pain. And by starting small, you are better able to manage your responses and build up resilience over time, so you avoid overreacting when something challenging comes your way further down the line.

Proactive Steps
In terms of bracing for the future, Choosing Courage also outlines a range of proactive steps that readers can take to create the right conditions for courageous behaviors and increase the probability of more successful outcomes. Among these are working on your internal reputation, ensuring that colleagues are attuned to your warmth, competence, your emotional intelligence and your sense of justice or neutrality.

Detert uses the example of Jane, who had taken on a role in a tech company in which senior management acted as “door guards,” initially blocking entry to her new ideas or approaches. Instead of continuing to push issues, Jane started taking these managers to lunch to listen and learn from them, and then to step in to help if projects went awry.

“She learned, in her own words, the ‘cultural taproot’ of the place, figuring out how to align others around ‘why’ and frame what she was doing in ways that allowed others to perceive her intent as genuine and for the greater good …. Now, rather than responding negatively to (her) moves, people at her firm cite these actions as courageous and accept the rationale that motivates them.”

Another strategy in creating the right conditions to be courageous at work is to maximize your job security, says Detert. It also helps to ensure you have built up the skills, competence and network to safeguard your “professional mobility,” should push come to shove.

“Building your personal autonomy empowers you to act with courage and drive change, with less fear of suffering unacceptable economic, social or psychological consequences. Taking steps to avoid feeling financially or economically handcuffed to your current situation allows you to take steps that feel consistent with your values and goals, even if those steps risk upsetting those with power over your current economic situation.”

Choosing Your Battles
Of course, no book on courage would be complete without a chapter on timing.

In a discussion of “choosing your battles,” Detert invites the reader to reflect on the things that matter enough to fight for, and those that are worth letting go. It’s not easy. Take on too many issues and you risk being seen as a naysayer. Conversely, never taking a stand means you end standing for nothing. The key is to know yourself: to understand your own key values and goals, to know what is non-negotiable for you, and to be true to yourself.

Take Juan, the CEO of a company in Colombia. Informed that his COO had been sexually harassing a young female intern, Juan had to make a decision: to keep the man on as a valued senior executive whose expertise would be critical to site expansion at a key industrial facility, or to make the more courageous choice of dismissing him. According to one employee, this man was seen as so important to future growth that the company had effectively put its fate in his hands. Nonetheless, when Juan found out about the sexual predation, he fired the COO in less than 24 hours.

“As costly as this decision appeared,” writes Detert, “Juan thought about the calculus differently: From a moral perspective, he could not afford to have someone in the organization, with all that power and accountability, behaving that way.”

For Juan, the decision to choose courage did not come without personal cost. In firing the executive, he had to physically relocate himself to the site and take on the work of the COO to ensure the successful implementation of major changes already underway. The trade-off for Juan was the ability to look himself in the mirror and say: This is who I am.

Think First
Of course, acting courageously — with competence — also means keeping emotions in check and avoiding making impulsive decisions. A good rule of thumb here is to think first, act later — to deploy what law professor William Miller calls the “practical wisdom” of knowing when it’s the right time or place to make a stand.

Competently courageous people learn to pay attention to timing. It means asking yourself when in the day or week ahead (or even in the longer term) might be the optimal time to make your move. Successful practitioners are those who try not to act before other people are ready to take them seriously, but also not to wait until the moment is lost.

Choosing your battles, in sum, is contingent on being guided and informed by personal values and goals, without letting emotions go unchecked; it also depends on timing.

“And ask yourself this: Are you fighting a battle or the war itself?” cautions Detert. “If it’s a battle, determine whether what you might gain from acting now is likely to help or hinder the broader objectives — the war — that you are trying to win.”

In the next article, we will look at how Choosing Courage helps you to manage your messages, your emotions (and those of other people), and the journey that will take you to the top rung of your personal courage ladder.

The preceding is drawn from Choosing Courage: The Everyday Guide to Being Brave at Work (Harvard Business Review Press) by Jim Detert.