Hype vs. discipline. Charisma vs. responsibility. The buzz around Adam Neumann's WeWork went from enthusiasm for a unicorn with billions in venture capital to backlash for a company with a plummeted valuation and scrapped IPO. Yet with new leadership and governance structures, long-term profit may be in sight. What might we learn from WeWork? 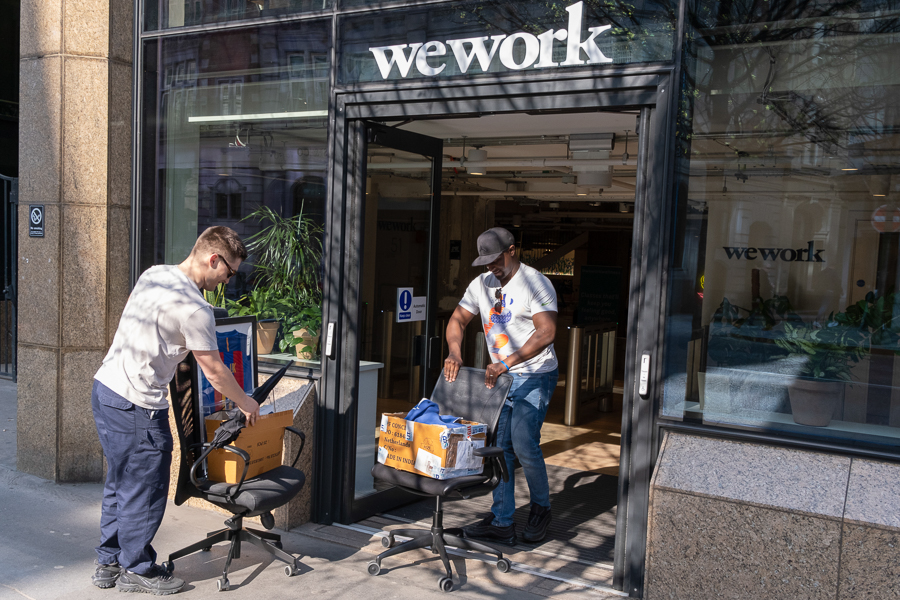 Since going public via a SPAC merger with BowX Acquisition Corp, WeWork seems to be heading toward a place in which long-term profitability could be in sight. Image: Richard Baker / In Pictures via Getty Images
The recent release of WeCrashed, an Apple TV+ miniseries on the WeWork saga, is just one of several new TV series — including Super Pumped, which is about Uber, and The Dropout, about Theranos — that have fueled a fascination with high-profile corporate-governance breakdowns. The opportunity to peer behind the scenes of what happened at these companies has not only piqued the public’s interest, it has also shifted the broader conversation in the investment community around the importance of establishing effective startup governance and guardrails around founder influence.

WeWork appeared to be destined for great things. From inception, the coworking company had an extraordinary ability to generate buzz among investors, press and media, and in no small part this was down to the charisma of its founder, Adam Neumann. A flamboyant figure prone to eccentricities and etiquette-busting antics, Neumann quickly had investors in thrall — none more so than Japanese conglomerate, SoftBank. So entranced was SoftBank founder, Masayoshi Son, with Neumann’s grandiose ambitions and infectious optimism, that in 2017 he made an initial outlay of $4.4 billion in a deal that valued WeWork at $20 billion.
And the cash only continued to flow. Even as Neumann began to wrest more and more voting power from the board and his eccentricities multiplied, unchecked — giving his wife major corporate responsibilities and trademarking the word “We,” among them — SoftBank eagerly poured another $13 billion into the company over the next two years, coupled with a mandate for growth.
In 2019, all signs were that WeWork was on track for a big-splash IPO, they thought. And a handsome payday for Neumann, Son and SoftBank.

An attempt to list WeWork in 2019 was a disaster. When the company’s pre-IPO registration papers were made public on the Securities and Exchange Commission website in August, it gave external investors and journalists a first, clear look at its financials, its business plan and governance structures. And what they saw did not tally with its stratospheric price tag.
For a start, WeWork’s aggressive pursuit of fast growth was not backed by a long-term roadmap to profitability or a plan to attenuate ballooning costs. Then there was the issue of Neumann’s excessive control over the board, his conflicts of interest, loans he had taken from the business and questionable transactions. Questions were asked about his self-dealing and about the board’s failure to exercise sufficient oversight to rein in their eccentric CEO and keep his voting power in check.
The backlash was immediate. WeWork’s valuation plummeted from $47 billion to just $5 billion, and in fewer than four weeks, the IPO was scrapped. Neumann was ousted as CEO, but only after SoftBank had agreed to a severance payout of $1.8 billion — a gesture that undoubtedly left a sour taste in the mouths of the thousands of WeWork employees whose jobs were also scuttled in the fallout.
For this unicorn, flush with billions in venture capital and tipped to become the next big thing in tech and retail, the dream was over. For SoftBank, the job of recouping its losses was just beginning.

Efforts have continued since 2019 to focus on strategy and to narrow the company down.
This has entailed restructuring the workforce and substantial layoffs.
However, since going public via a SPAC merger with BowX Acquisition Corp, WeWork seems to be heading toward a place in which long-term profitability could be in sight.
In February 2020, Sandeep Mathrani was brought in as the new CEO. A seasoned business leader with decades of experience in real estate, Mathrani is likely to bring a skill set better aligned to the business and its market. Having enacted corporate turnarounds elsewhere, he’s also expected to exact discipline in terms of growth and spending. Mathrani himself has likened his appointment to bringing “a grown-up into the room.” How he fares at the helm of WeWork remains, however, to be seen.

The relentless influx of cash into WeWork, Neumann’s self-dealing and the company’s inflated valuation on Wall Street are the products of hype, unchecked fervor, and excessive belief in the vision and capabilities of its charismatic CEO. And it highlights four key lessons for founders, investors, leaders and boards.
The foundations for good governance need to be set by management from the start of any business. Part of this means articulating and building alignment around how investment happens. However tempting it is to take the cash, the question needs to be asked: Do the investors’ incentives align with the business plan and longer-term strategy?
On the other end of the deal, investors should be aware of the draw of a charismatic leader and guard against a visionary personality getting in the way of necessary due diligence. Neumann was a hugely compelling presence on a mission to “elevate the world’s consciousness.” So convincing was Neumann’s vision that it took Son less than 30 minutes, sitting in a car, to sign up as an investor. He then gave too much rein to Neumann’s vision — and neglected to ask the right questions to ensure the company’s fundamentals were on track.
The balance of power between the board and the founder must be constantly evaluated and managed. These dynamics can and should evolve as a company scales; however, it is critical to be forward-looking in establishing norms and policies that enable the board to effectively monitor and advise management at all stages of growth. By failing to control Adam Neumann’s voting power at each round of investment, investors made a serious error that ceded almost all their influence over future decisions.
As an IPO draws close, the need for governance oversight becomes greater. It is at this very moment that boards must be especially proactive: Be cognizant of potential risks, impose discipline over management and take steps to secure investor confidence.
The preceding is based on the case WeWork: But Does the Corporate Governance Work? (Darden Business Publishing), by Darden Professor Yo-Jud Cheng and Stephen E. Maiden.