The Parekhs of Nilkamal have, over nearly four decades, built a brand that's become synonymous with plastics 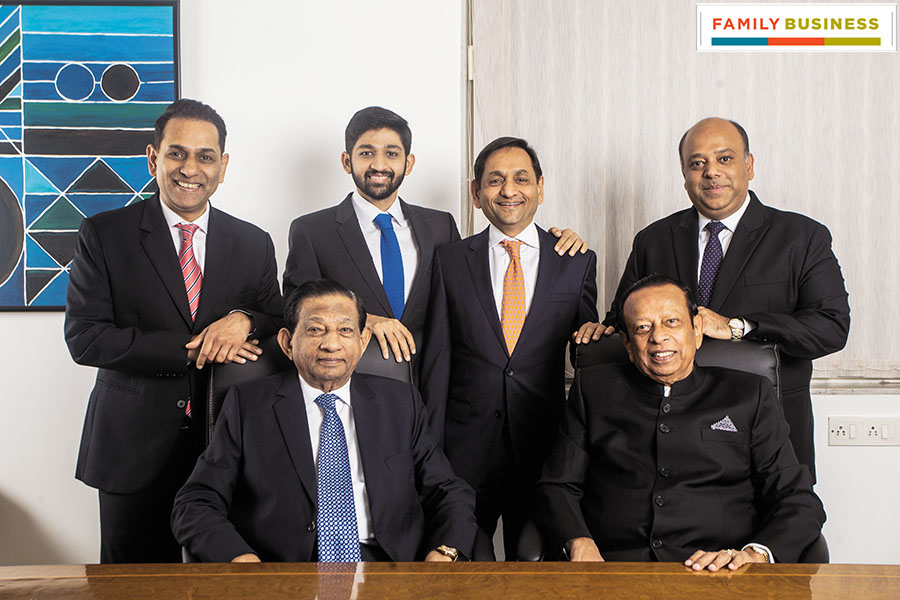 A few years after Nilkamal was set up in 1981, Sharad Parekh, then 37, found himself following a milk van all the way to the Worli Dairy in central Mumbai. Now 75, and managing director of Nilkamal, he had been on the lookout for new growth avenues. Operation Flood had led to a mushrooming of dairies and he wanted to see if Nilkamal could enter the market for plastic milk crates, which was a huge emerging opportunity. His persistence paid off and, by 1983, Nilkamal got an order for plastic crates, opening up a new business line.

The 1980s and the 1990s were when plastics began to be used in a whole host of applications due to the availability of high density polyethylene in India. Heated, injected into moulds, cooled and then solidified, these plastics are strong and durable at a far lower cost than metal. Plastic buckets replaced metal ones. Foldable metal chairs at wedding venues made way for lighter plastic ones that were easier to transport. Office chairs and suitcases have also gradually moved to plastic.

A host of unorganised players emerged but a few brands were built. Since then Nilkamal, Supreme Industries, and Wimplast (Cello) have emerged as trusted names. Be they plastic chairs, tables, office furniture or industrial crates, the Parekhs of Nilkamal have an almost four-decade history of innovating and entering new lines of business with unfailing regularity.

In a market in which brand loyalty and pricing power are not necessarily strong, they have worked to make the name recognisable and trustworthy. This is clear from its enviable growth record from the time it listed in 1991. Revenues have since climbed from ₹5.09 crore to ₹2,160 crore, a compounded growth of 25.1 percent over 27 years. Though the business is heavily dependent on raw material prices, it has healthy operating metrics. At ₹123 crore in profit in the year ended March 2018 and a market cap of ₹1,900 crore, the company generated a return on equity of 14.5 percent. This is commendable, given that Nayan Parekh, president and executive director (material handling), acknowledges, “There are zero barriers to entry. It is a combination of many factors that results in a moat.”

Brand Building
The Parekhs, whose fourth generation recently entered the business, trace their lineage to Vrajlal Prabhudas Parekh who, in 1934, started a plastic button manufacturing unit as a sweat equity partner. He’d earlier spent time working as an accountant but realised his heart lay in business. The initial years saw the company, later known as National Plastics, take baby steps in manufacturing. They tried their hand at everything from plastic buttons to plastic household items. Vamanrai Parekh, 83, Nilkamal’s chairman, looks after operations and Sharad Parekh looked after sales.

In 1981 the business split, with Vamanrai and Sharad separating from their brothers. Initially they used the National Plastics name, but realised there was some brand dissonance in the marketplace and took to using the Nilkamal name after a company they had acquired.

The 1980s were spent doing contracting work for Blow Plast and scouting for new business oppor-tunities to allow Nilkamal to sell directly to the customer. Hiten Parekh, the joint managing director who was the first from the third generation to enter the business, distinctly remembers a large order of 10,000 crates that Nilkamal received from Mother Dairy in the 1980s. “At that time the order was a big deal for us,” he says.

While Nilkamal started directly marketing to B2B customers (such as the order for milk crates) a large portion of its business came from working as a contractor. One such customer was Blow Plast that would make chairs under the Moderna brand name. That changed in 1981 when Manish Parekh, president and executive director (material handling),  joined the business. His first task was to see if Nilkamal could start selling chairs under its name. The deal to supply to Blow Plast was terminated and Nilkamal entered the consumer segment (even though in the initial days the buyers were mainly clubs, institutions and wedding venues).

“It was very hard to get off the ground initially as Blow Plast dealers refused to entertain us,” says Manish, 50. Appointing dealers, building a distribution network and penetrating new markets were all done in the 1990s. Manish believes he would have travelled to every district across India. From selling 5,000 chairs a month in the mid-1990s Nilkamal today sells 25,000 chairs a day.

As it added more plastic products in the 1990s, it realised the need to build a brand. That’s because pricing power in the business is not very strong and, “change in raw material costs is generally passed on to the customers, although with a lag,” says Siddhartha Khemka, head of retail research at Motilal Oswal.

“ There are zero barriers to entry. A combination of many factors results in a moat.”

One way to avoid this is to get into value-added plastics furniture. Nilkamal has set up home-furnishing stores and also competes for contracts to furnish offices. In 2003 when Nilkamal was about ₹300 crore in topline and had a national reach with several product lines, it made a bold bet to spend ₹2.5 crore on a single advertising campaign.

A slot at the 2003 cricket World Cup final was booked and ad filmmaker Prahlad Kakkar engaged to come up with a campaign. India reached the final and the Parekhs got a much bigger bang for their buck than they could have hoped for.

For now Nilkamal’s revenues are divided between consumer (furniture, 45 percent) and B2B (material handling, 55 percent) businesses. There is also a new packaging business looked after by Mihir Parekh, 27, who recently joined the company.  It is a combination of a national distribution and sales network and factories across the country (freight accounts for 10 to 12 percent of costs), institutional relationships and research and development that constitutes a moat in Nilkamal’s business.

In addition Vamanrai spends a fair amount of time and effort in monitoring global raw material prices on Platts to make sure the company sources them at the most competitive rate. “My aim is to get them at the lowest price and at the same time, ensuring factory lines are never stopped for want of raw material,” he explains.

The last five years have seen Nilkamal’s bottomline expand while the topline has been relatively flat. Fortunately the company is in a segment that has a long growth runway. Per capita plastics consumption in India is 11 kg per capita compared to the global average of 38 kg per capita, according to Ficci, an industry association. Nilkamal had engaged the Boston Consulting Group to look at new lines of business that it can enter. Packaging was one idea. Mattresses are another new product line.

Nayan, 47, is candid enough to acknowledge that getting topline growth is a challenge and that from ₹2,000 crore, growing even 10 percent will require the addition of ₹250 crore to the topline every year. While add-ons in the furniture and material handing business will bring in incremental growth the company will have to look at new business they can enter. What Nilkamal is clear about is their expansion will be asset light. Debt is down from ₹400 crore to ₹100 crore in the last five years.

Family Rules
A key ingredient of the company’s success has been the trust the family members share. While they draw a salary from the company, all investments are pooled and made together. “The reason for this is that members must focus only on the company business and not spend time monitoring their personal investments,” says Hiten, 56. Money can be pulled out from the pool for specific reasons like a wedding or jewellery purchase but all major investments are held together.

More recently, family members sat down and laid down board rules for the fourth generation, which has started entering the business. The rules lay down salaries, promotions and responsibilities. “It is still work in progress and we have to see how it works for a few years,” says Mihir.

The family’s success has also led to them wanting to contribute back to society. Unlike for some companies where philanthropy is an extension of their business, the Parekhs want to make sure their initiatives are unique. Vamanrai takes the lead here and recently organised a camp for prosthetic limbs near their factory in Sinnar, near Nashik. He was amazed with the demand and the distance people travelled to get the prostheses. Originally planned for a day, it went on for four and Vamanrai ensured no one was turned away. He plans to take the initiative to their other plants as well.

As Nilkamal grows, it would be fair to expect more such initiatives from the Parekhs.

Tweets by @forbesindia
Global warming is a challenge for the champagne industry: Amine Ghanem
Motilal Oswal: Up to the challenge