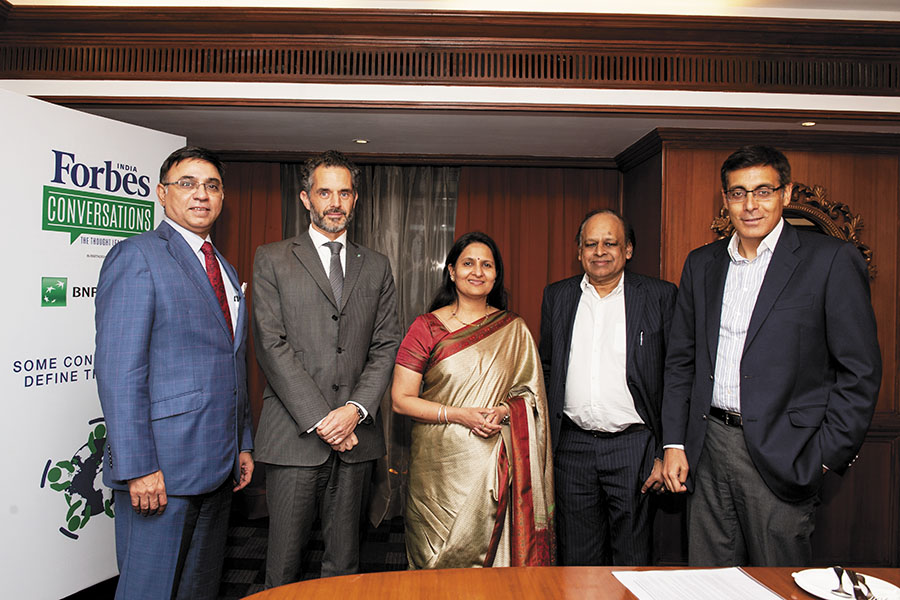 Forbes India, in association with BNP Paribas, held the second session of the Forbes India Conversations: The Thought Leadership Forum, on January 16, 2018, bringing together senior business leaders to share their insights on ‘The Future of Globalisation’. Forbes India Editor Brian Carvalho was in conversation with Crisil’s MD & CEO Ashu Suyash; Umang Vohra, CEO of Cipla; Annaswamy Vaidheesh, vice president, South Asia and MD, GlaxoSmithKline Pharmaceuticals; Vikash Mittersain, chairman and MD, Nazara Technologies; and Joris Dierckx, CEO & Country Head , BNP Paribas India. ‘Glocalisation’, they unanimously said, is the emerging trend even as natural barriers to globalisation are being demolished rapidly. Some also said that one does not need scale anymore to generate efficiencies. Excerpts:

Brian Carvalho: In today’s world, globalisation appears to have many counter buzzwords. Among them are protectionism, nationalism and de-globalisation. What is the state and fate of globalisation today?
Ashu Suyash: Those who do not see any benefits raise the issues. The issues are emotional and not really rational and we all know that anything which starts off emotionally, appeals to everybody, including the rational people. The reality is that when you get to the halfway mark, risks and the negative impact of going back outweigh the challenges of going forward. What’s driving the pushback is that the benefits of globalisation are uneven. But nobody wants to do business only in a [particular] country. Even a domestic business has aspirations outside because the pool is so much larger, and that alone allows leaders, politicians and people to step up their game.

Technological advancements are linked to this issue. To me, the noise around protectionism and job losses is really whether technology is invading our space and people are losing jobs. I don’t think economies and companies are geared and ready for the whole technology wave.

Umang Vohra: Globalisation can be linked to goods, services and credit, but I am unsure if that is how the world is going to operate in the future. I don’t think so. Interconnectivity in the world has escalated. Therefore, the definition of globalisation ought to change from goods and services and possibly credits.

Facebook has about 1.6 billion subscribers. India’s population is 1.3 billion, China is another 1.3-1.4 billion. I look at interconnectedness as being at an all-time high in the world. Ashu, you brought out a great point on technology; I think we underestimate the impact that interconnectedness and technology will have on globalisation. I don’t think companies of the future with high market valuations and customers will necessarily be people with huge tangible assets on the floor.

Vikash Mittersain: I personally think globalisation is an old word already.We need to move on to something called glocalisation; there is going to be no reversal of globalisation. We are too far down that path. For products like ours, which are games, we do a lot of localisation—choosing the language, the way it is operated and the way we work. A product is the same, but the approach is local. The best way to do a ‘manufacturing globalisation’ is to have a local company, licence a product to them and manufacture it locally under the same brand. 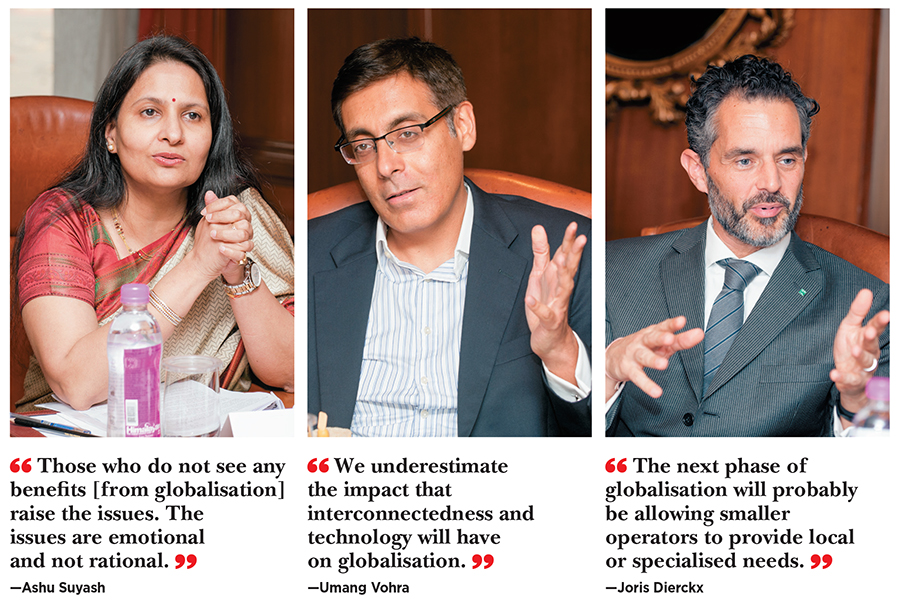 Carvalho: So, globalisation may apply very well to a company like GlaxoSmithKline Pharma?
Annaswamy Vaidheesh: Technology is going to move to such an extent that all the barriers are going to be lost between different countries… of course there will be antibody responses from various quarters which is what we are seeing in the form of Brexit. I see that more as an antibody response. I think that will all settle down. Globalisation per se has reached a different dimension. It’s no longer the same dimension as we used to talk about in the past. It’s a different world that we live in.

Carvalho: Joris, probably the French pride is similar to the English pride of not allowing an American company to come in...
Joris Dierckx: Oh, I am not sure, but General Electric bought a part [power and grid business] of Alstom right?

Carvalho: [France] did reject Brexit at the end of the day, right?
Dierckx: A lot has already been said, but I think that France is at the forefront; I agree with everything that has been said. It [globalisation] is irreversible because it has gone far. The next phase of globalisation will probably be more ideation and also allowing smaller operators, in services or manufacturing, to provide local needs or specialised needs… through technology, those ideas can flow much freer. I can only see that increasing.

Vaidheesh: There are couple of things that generally do not allow globalisation to happen, typically religion, culture, and the so-called tribal attitude of various countries. I think that was actually preventing globalisation from happening for a long time, but with the youth having access to technology, they are going to bypass these barriers. Today, you don’t need to go [through the religious route] because they are all gaining access online through their mobile phones—in their personal space you can reach out to them and communicate through your gaming—like one of my friends who is in Stanford… they are developing games for health, for children to consume food.

Mittersain: It is happening for health and for education, so almost everything is lending itself to games. I get several requests….

Vaidheesh: I think the natural barriers to globalisation are about to get demolished. Now those things may or may not exist.

Carvalho: But we have seen this wave of nationalism and the code of the Trumpism. Is this preservation of national interests? We are seeing probably not a similar wave, but a slightly different kind of wave of nationalism here, of Indianness. So, we will have a Baba Ramdev versus Hindustan Unilever or maybe a J&J or GSK. Can both coexist, should they or will they coexist in such a market?
Mittersain: That is glocalisation in my opinion. It is global in nature, but it also local in nature.

Vaidheesh: No, if you look at even earlier days, there was Hindustan Unilever versus Nirma. I think these are the essentials of operating in different markets… you find some number of local companies which compete with multinational firms or even China. For example, Baidu now competes with Indian companies.

Suyash: To answer your question, it will coexist. That does not mean it will be harmonious all the time. It will mean that global companies will localise and local companies will globalise because for both, to serve the broader world is more important as it is the larger playing ground; nobody likes a small playing ground. McDonald’s, for instance, created a different SOP [standard operating procedure] for India finally, as did Domino’s and you have the paneer and chicken tikka versions. Similar patterns are seen across other regions of Asia. 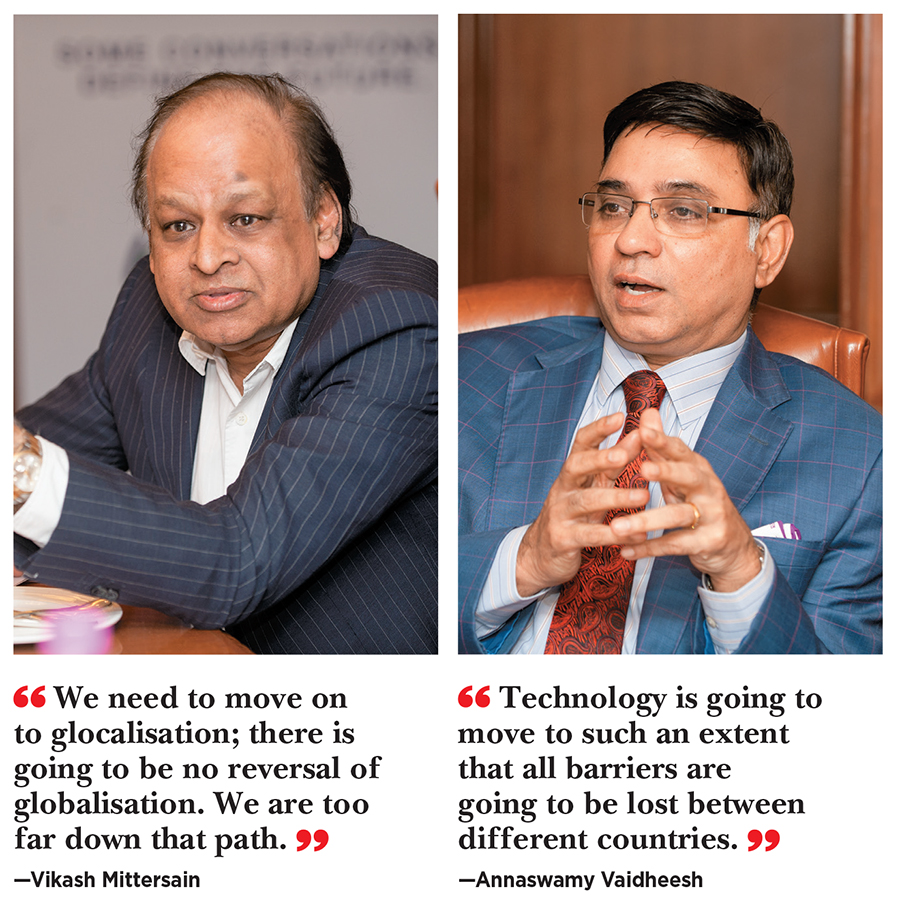 Carvalho: There is one more aspect: Something which we saw 10 years ago, a massive phase of asset-heavy consolidation… Hindalco’s acquisition of Novelis was one of the last of its type; that was how we saw globalisation then. Has that changed? There are acquisitions taking place, but how has that asset-heavy strategy kind of changed over the last 10 years with technology playing a role and with companies getting more connected?
Suyash: I would give Crisil’s example. We were set up as an Indian company, floated by institutions, but at present, 65 percent of Crisil’s revenue comes from global companies and clients based and serviced in the developed markets. This is an asset-light strategy. I would say algorithmic style intellectual capabilities are critical because we are an analytics firm. Now did we plan it that way? No. So to me, it was asset-heavy in the past, because that was the end of what I would call the industrial revolution. The new industrial revolution is happening as we speak and it is cutting-edge formulation technology because consumers of today are not satisfied with the average. They want the best, be it the gaming industry, the banking industry, the pharma industry or the food industry… in the food industry, globalisation is not acquisition—it is acquisition of some chefs.

Dierckx: There is also a potential counter revolution where technology allows [you] to go away from the big centralised systems to much more decentralised types. You don’t necessarily need the scale anymore to generate efficiencies.

Mittersain: [To Suyash]: You are talking about asset-light or asset-heavy. Our company actually has zero assets and owns nothing. We only own the IT and developmental capabilities, that are also not our own. For a company of our size, we have only 100 people whereas our turnover size should be [equivalent to] 1,000 people, so it’s all outsourced. We just do the ideation and the last mile. Wherever we can find the centres of excellence for that product, we create those and that’s where the revenues come from. I believe that even manufacturing should be asset-light. There is no point in putting up plants. There is enough manufacturing capability available around the world. You get it made anywhere to your specification. You control the quality, you control the design and ship it wherever you want. That’s where globalisation and glocalisation comes in. I mean why does one need a huge investment to increase the turnover by putting up a plant? That is old thinking.

Vaidheesh: That’s true even in pharma. In fact, even the government should say: ‘You guys come in—I will give you money to do research in India for drug discovery and will syndicate your risk and the patent. The company should give it free to India and the rest, you take it to the world.’

So, instead of breaking the patent, India can create a patent. That’s the way the government should start thinking.

Suyash: All this thinking around patents promotion, by setting up these innovation labs and incubation hubs, is interesting. There is a huge need in the standardised vertical called the old economy because this lends itself so naturally to it, but it is not yet on the policy agenda, but I would vote for it.