One of the country's strongest legacy brands in media, the Indian Express, has also made rapid strides in the digital world with the entry of the 29-year-old in 2012. And he has even more up his sleeve 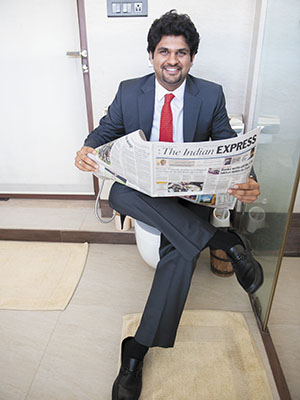 It was 2011 and Anant Goenka, son of Express Group chairman Viveck Goenka, was yet to join the family business. He was a media manager at Spenta Multimedia and had just returned from an internship at Bloomberg’s London office. He went to meet Citibank officials to walk them through some of Spenta’s magazines and seek business. “I was adamant about not inflating circulation numbers for advertising purposes. I was selling a magazine that was strong… that would have delivered good response for the client,” recounts the fourth-generation Goenka. “I was very idealistic about these things (not that I am not today). But we lost the business.” Reason: The brand manager he had met halved the number which Anant had told him, assuming that—like others often did—the real number had been doubled in the first place.

It is not to suggest that Goenka, now a whole-time director and head of new media at the Express Group was naïve in business skills. Far from it. He was just honest and presented things the way they were. Five years later, he is still that man, a reflection of the DNA of the Express Group, which his great-grandfather Ramnath Goenka had founded in 1936.

A rift in the family following the demise of the founder in 1991 led to a split in the group in the late 1990s. In the division, the northern business operations of  The Indian Express went to Viveck, while the south went to Anant’s uncle Manoj Sonthalia under The New Indian Express brand.

At present, Anant’s father Viveck is very much the boss, group chairman and managing director of the media outfit, which includes daily newspapers such as The Indian Express, The Financial Express (in English), Jansatta (in Hindi), Loksatta (Marathi) and Lokprabha magazine.

But 29-year-old Anant is rapidly finding his own space and has run up impressive growth in the world of clicks and scrolls of the group’s digital business, which includes the mobile app, website and epaper.

When Anant joined the Express Group in 2012, the flagship brand was ranked number 15 in terms of news websites visited, according to Nasdaq-listed cross platform measurement company comScore. It has now jumped to number three among news sites, behind The Times of India and NDTV. In terms of visitors, The Indian Express website, Indianexpress.com, has seen a seven-fold jump to 42 million unique visitors each month, up from 6 million in 2012.

The digital business of the Express Group is also gaining financial muscle: It expects to end FY2015-16 with revenues of Rs 30 crore, a spike of 150 percent from Rs 12 crore in 2014-15. When Anant joined in 2012, revenue was just Rs 1.2 crore in digital, he says. He declined to offer earnings for the group as a whole.

The Express Group’s digital arm has offices in New Delhi, Mumbai and Bengaluru, and an editorial and sales team of 105 people. Anant says he would not be surprised if this figure doubles by 2018.

Over the past four years, the group’s investments towards the digital platform, including staff, infrastructure and technology, has been Rs 20 crore.

Besides new media, Anant also heads the Business Publications Division (BPD), which has a clutch of publications on technology, health care, travel, hospitality and pharmaceutical developments and events.

While his overall responsibility in the group is a heavy mantle to inherit, at no stage was the pressure of succession thrust upon Anant. “I always wanted to enter the media business. I was inspired by Ramnathji’s stories and my visits with him to the press,” he says. The press was then at the basement of the iconic Express Towers at Nariman Point, Mumbai, where Anant resides.

“I feel grateful to have always felt a sense of purpose in a business that has the ability to influence public discourse and generate conversations,” he says.

But there were serious challenges that Anant faced. The DNA of The Indian Express was not digital and there was no clear matrix to determine success in the digital space. Besides, digital businesses in the Indian media context were hardly profitable.

Also, other groups such as Bennett Coleman & Co Ltd (which publishes The Times of India), Kasturi & Sons (publishers of The Hindu) and HT Media (the owners of Hindustan Times) had—in terms of digital—outpaced the Express Group, although it was the first to launch a news website in 1994, then called Expressindia.com.

In January 2015, The Indian Express launched its mobile application; it took them nearly two years to finally kickstart it after consultations with several digital vendors. The app was launched through an in-house team but was designed through an outside agency.

But what Anant has done right is to make digital the buzzword in a group known for fiery journalism in print, the traditional form, originating from 37 newsrooms across 31 cities.

It helped that he always had the backing of his father Viveck.

In fact, his entry to head digital sent a message to the employees that the group was serious about digital. The department was also run separate from print operations, even in terms of sales. “Digital was our opportunity to disrupt rather than be disrupted, and lead the news brand,” says Anant.

Ronnie Screwvala, the founder of the UTV Group (now Walt Disney India) who also runs his investment firm Unilazer Ventures, says the younger Goenka’s advantage was that his overseas experiences helped him “see the world with a different lens”. Anant is a Dean’s Scholar in print journalism from the Annenberg School of Journalism, Los Angeles.

In 2015, Anant also achieved the print-digital synergy in the newsroom in Delhi, where the editorial desk is now based. Editorial meetings now have an equal representation of print and digital teams. “We have seen a 20 percent rise in traffic and 40 percent jump in content through this integration,” says Anant. Now, The Indian Express website streams at least 11 videos every day to accompany articles from journalists.

It is not just hardcore news, which is most popular online. Group business daily The Financial Express’s Bollywood box office numbers are more widely read than the traditional film reviews in The Indian Express, Anant says.

The group is witnessing action in the regional language space too: Jansatta’s digital platform has been relaunched.

Several Indian media houses have witnessed rapid growth in their digital platforms as internet and mobile users rise each month. Globally, most newspapers
across the US and Europe are struggling with sagging advertising revenues, falling profits and circulation, with news tilting towards digital over the past two decades. Industry estimates suggest that digital today gets about 7 to 8 percent of the total ad spend in India; this could jump to 20 percent in the next 3-4 years.

Despite rapid growth over the past four years, digital journalism will have its challenges going ahead. “Where does digital go from here is anybody’s guess; how will firms like the Express Group break out from the pack?” asks Screwvala.

To that, Anant has big plans.

He is working on an ambitious paywall plan for overseas Indians, which could start by March-end. Non-resident Indians account for about a third of the Express Group’s total audience. “We are selling digital content too cheap, this has to change,” he says.

Transformation, though, has become a part of The Indian Express DNA. Four years ago, Anant might have been a little wary about whether a strong legacy brand like The Indian Express could make that transition to the digital world. In 2016, these worries are not there anymore.

“The Indian Express will exist as a digital standalone brand as well as in print. Legacies can move [to the digital world],” he says. “When I started out, I always thought that legacy would be a dampener to digital growth. But on digital, we realised that The Indian Express is an internationally known mainstream news brand. It helps us get to advertisers and the homes of consumers.” The twain, it seems, can meet.